Periodic limb movements in sleep (PLMS), previously called nocturnal myoclonus, is a disorder in which repetitive, brief and stereotyped limb movements occur during sleep, usually about every 20 to 40 seconds.

Periodic limb movements in sleep (PLMS), previously called nocturnal myoclonus, is a disorder in which repetitive, brief and stereotyped limb movements occur during sleep, usually about every 20 to 40 seconds. Dorsiflexions of the big toe, ankle, knee and sometimes the hip are involved (Table 59.10) 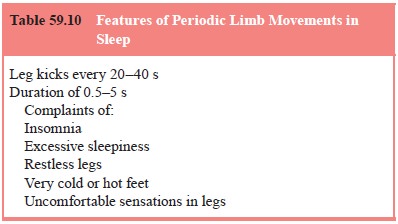 Questioning of the patient or bed partner often yields reports of restlessness, kicking, unusually cold or hot feet, disrupted and torn bedclothes, unrefreshing sleep, insomnia, or excessive day-time sleepiness. Patients may be unaware of these pathological leg movements or arousals, although their bed partners may be all too aware of the kicking, frequent movements and restless-ness. If these disorders are strongly suspected, the patient should probably be referred to a sleep disorders laboratory for evaluation and an overnight polysomnogram with tibial electromyograms. These disorders are often associated with transient arousals in the EEG recording. Diagnosis is made when the periodic limb movement index (number of leg jerks per hour of sleep) is five or greater, accompanied by arousals. The jerks occur primarily in the legs but may also appear in less severe forms in the arms. The movements can be bilateral or unilateral and occur in stage 1 and stage 2 sleep. Patients often have reduced deep sleep because the jerks continually awaken them.

Individuals with PLMS are reported to sleep about an hour less per night than control subjects without PLMS. Inter-estingly, the prevalence of PLMS is not higher in insomniac pa-tients than in those without insomnia. Complaints of excessive daytime sleepiness increase in individuals with PLMS, prob-ably consequent to the numerous sleep interruptions. The psy-chiatrist may find it useful to talk with a bed partner, who will often describe kicking and leg twitches during sleep in indi-viduals with PLMS. The myoclonic movements are not related to seizure disorder but should be distinguished from seizures. Because complaints of insomnia and daytime sleepiness are not uncommon, other insomnias, sleep apnea and narcolepsy should be ruled out.

Prevalence of PLMS in young and middle-aged adults has not been fully established. In sleep disorders clinic popula-tions, about 11% of those complaining of insomnia are diagnosed with PLMS. In the elderly, however, this condition is extremely common; more than 45% have at least five leg kicks per hour of sleep.

Because the pathogenesis of PLMS is usually unknown, treat-ment is often symptomatic (Table 59.11). Some studies suggest that the movements arise subcortically from the brain or spinal cord; others suggest subclinical peripheral neuropathy. At the present time, dopaminergic agents such as levodopa (L-dopa), pergolide, or pramipexole generally provide the most effective treatment for both PLMS and restless legs. Opiates, such as oxycodone and propoxyphene, have also been demonstrated to be effective in the treatment of PLMS and restless legs syn-drome. Anticonvulsants, such as carbamazepine and gabap-entin, have been shown to be effective in treatment of restless legs syndrome. Clonazepam, a benzodiazepine anticonvul-sant, is effective in the treatment of PLMS and possibly for restless legs syndrome. Other benzodiazepines have also been used to treat these conditions, as they will decrease some of the awakenings but may have no effect on the number of leg movements. 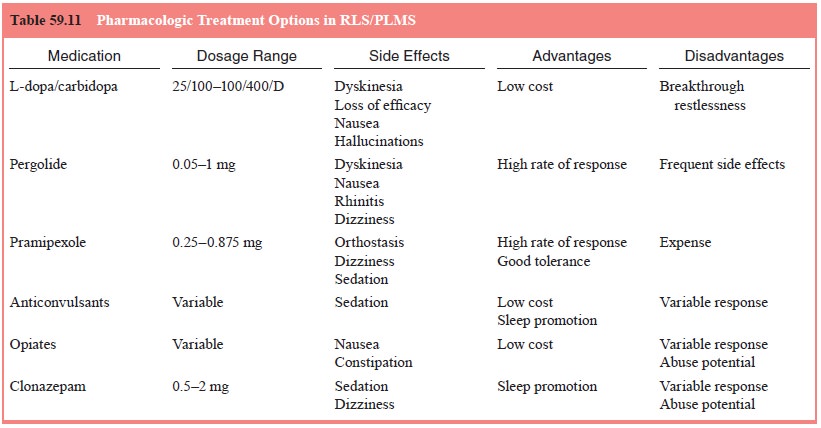