Heart failure is a syndrome with many causes that may involve one or both ventricles.

Heart failure is a syndrome with many causes that may involve one or both ventricles. Cardiac output is usually below the normal range (“low-output” failure). Systolic dysfunction, with reducedcardiac output and significantly reduced ejection fraction (< 45%; normal > 60%), is typical of acute failure, especially that resulting from myocardial infarction. Diastolic dysfunction often occurs as a result of hypertrophy and stiffening of the myocardium, and although cardiac output is reduced, ejection fraction may be nor-mal. Heart failure due to diastolic dysfunction does not usually respond optimally to positive inotropic drugs.

“High-output” failure is a rare form of heart failure. In this condition, the demands of the body are so great that even increased cardiac output is insufficient. High-output failure can result from hyperthyroidism, beriberi, anemia, and arteriovenous shunts. This form of failure responds poorly to the drugs discussed in this chap-ter and should be treated by correcting the underlying cause.

The primary signs and symptoms of all types of heart failure include tachycardia, decreased exercise tolerance, shortness of breath, and cardiomegaly. Peripheral and pulmonary edema (the congestion of congestive heart failure) are often but not always present. Decreased exercise tolerance with rapid muscular fatigue is the major direct consequence of diminished cardiac output. The other manifestations result from the attempts by the body to com-pensate for the intrinsic cardiac defect.

Neurohumoral (extrinsic) compensation involves two major mechanisms (previously presented in Figure 6–7)—the sympa-thetic nervous system and the renin-angiotensin-aldosterone hor-monal response—plus several others. Some of the detrimental as well as beneficial features of these compensatory responses are illustrated in Figure 13–2. The baroreceptor reflex appears to be reset, with a lower sensitivity to arterial pressure, in patients with heart failure. 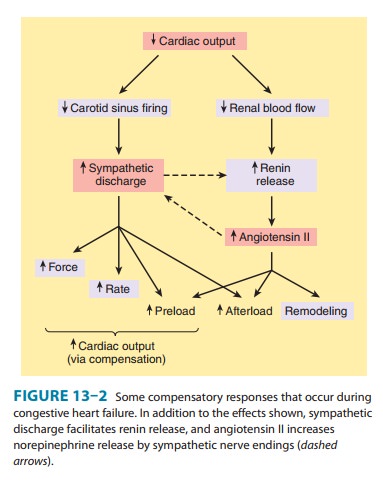 As a result, baroreceptor sensory input to the vaso-motor center is reduced even at normal pressures; sympathetic outflow is increased, and parasympathetic outflow is decreased. Increased sympathetic outflow causes tachycardia, increased car-diac contractility, and increased vascular tone. Vascular tone is further increased by angiotensin II and endothelin, a potent vaso-constrictor released by vascular endothelial cells. Vasoconstriction increases afterload, which further reduces ejection fraction and cardiac output. The result is a vicious cycle that is characteristic of heart failure (Figure 13–3). Neurohumoral antagonists and vaso-dilators reduce heart failure mortality by interrupting the cycle and slowing the downward spiral. 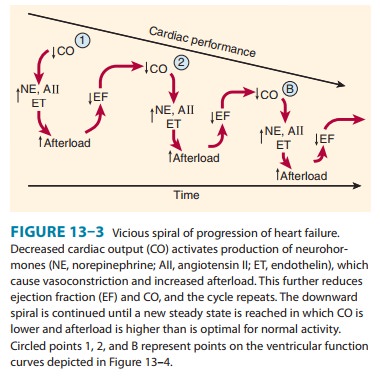 After a relatively short exposure to increased sympathetic drive, complex down-regulatory changes in the cardiac β1-adrenoceptor– G protein-effector system take place that result in diminished stimulatory effects. Beta2 receptors are not down-regulated and may develop increased coupling to the IP3-DAG cascade. It has also been suggested that cardiac β3 receptors (which do not appear to be down-regulated in failure) may mediate negative inotropic effects. Excessive β activation can lead to leakage of calcium from the SR via RyR channels and contributes to stiffening of the ven-tricles and arrhythmias. Prolonged β activation also increases cas-pases, the enzymes responsible for apoptosis. Increased angiotensinproduction leads to increased aldosterone secretion (with sodium and water retention), to increased afterload, and to remodeling of both heart and vessels (discussed below). Other hormones are released, including natriuretic peptide, endothelin, and vasopressin . Within the heart, failure-induced changes have been documented in calcium handling in the SR by SERCA and phospholamban; in transcription factors that lead to hypertrophy and fibrosis; in mitochondrial function, which is critical for energy production in the overworked heart; and in ion channels, especially potassium channels, which facili-tate arrhythmogenesis, a primary cause of death in heart failure. Phosphorylation of RyR channels in the sarcoplasmic reticulum enhances and dephosphorylation reduces Ca2+ release; studies in animal models indicate that the enzyme primarily responsible for RyR dephosphorylation, protein phosphatase 1 (PP1), is up-regulated in heart failure. These cellular changes provide many potential targets for future drugs.

The most important intrinsic compensatory mechanism is myocardial hypertrophy. This increase in muscle mass helpsmaintain cardiac performance. However, after an initial beneficial effect, hypertrophy can lead to ischemic changes, impairment of diastolic filling, and alterations in ventricular geometry. Remodeling is the term applied to dilation (other than that due topassive stretch) and other slow structural changes that occur in the stressed myocardium. It may include proliferation of connective tissue cells as well as abnormal myocardial cells with some bio-chemical characteristics of fetal myocytes. Ultimately, myocytes in the failing heart die at an accelerated rate through apoptosis, leav-ing the remaining myocytes subject to even greater stress.