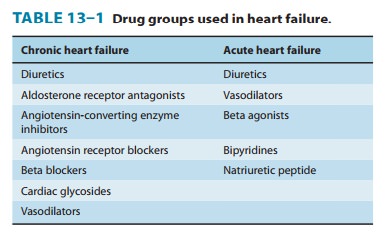 Diuretics, especially furosemide, are drugs of choice in heart failure. They have no direct effect on cardiac contractility; their major mechanism of action in heart failure is to reduce venous pressure and ventricular preload. This results in reduction of salt and water retention and edema and its symptoms. The reduction of cardiac size, which leads to improved pump efficiency, is of major importance in systolic fail-ure. Spironolactone and eplerenone, the aldosterone antagonist diuretics , have the additional benefit of decreasing morbidity and mortality in patients with severe heart failure who are also receiving ACE inhibitors and other standard therapy. One possible mechanism for this benefit lies in accumulating evidence that aldosterone may also cause myocardial and vascular fibrosis and baroreceptor dysfunction in addition to its renal effects.

ACE inhibitors such as captopril are introduced in earily. These versatile drugs reduce peripheral resistance and thereby reduce afterload; they also reduce salt and water retention (by reducing aldosterone secretion) and in that way reduce preload. The reduction in tissue angiotensin levels also reduces sympathetic activity through diminution of angio-tensin’s presynaptic effects on norepinephrine release. Finally, these drugs reduce the long-term remodeling of the heart and vessels, an effect that may be responsible for the observed reduction in mortal-ity and morbidity (see Clinical Pharmacology).

Aliskiren, a renin inhibitor recently approved for hyperten-sion, is in clinical trials for heart failure. Preliminary results sug-gest an efficacy similar to that of ACE inhibitors.

Vasodilators are effective in acute heart failure because they pro-vide a reduction in preload (through venodilation), or reduction in afterload (through arteriolar dilation), or both. Some evidence suggests that long-term use of hydralazine and isosorbide dinitrate can also reduce damaging remodeling of the heart.

A synthetic form of the endogenous peptide brain natriuretic peptide (BNP) is approved for use in acute (not chronic) cardiac failure as nesiritide. This recombinant product increases cGMP in smooth muscle cells and reduces venous and arteriolar tone in experimental preparations. It also causes diuresis. The peptide has a short half-life of about 18 minutes and is administered as a bolusintravenous dose followed by continuous infusion. Excessive hypotension is the most common adverse effect. Reports of sig-nificant renal damage and deaths have resulted in extra warnings regarding this agent, and it should be used with great caution.

Plasma concentrations of endogenous BNP rise in most patients with heart failure and are correlated with severity. Measurement of plasma BNP has become a useful diagnostic or prognostic test in some centers.

Related peptides include atrial natriuretic peptide (ANP) and urodilatin, a similar peptide produced in the kidney. Carperitide and ularitide, respectively, are investigational synthetic analogs of theseendogenous peptides and are in clinical trials .

Bosentan and tezosentan, orally active competitive inhibitorsof endothelin , have been shown to have some benefits in experimental animal models with heart failure, but results in human trials have been disappointing. Bosentan is approved for use in pulmonary hypertension . It has significant teratogenic and hepatotoxic effects.

Most patients with chronic heart failure respond favorably to cer-tain β blockers in spite of the fact that these drugs can precipitate acute decompensation of cardiac function . Studies with bisoprolol, carvedilol, metoprolol, and nebivolol showed a reduction in mortality in patients with stable severe heart failure, but this effect was not observed with another β blocker, bucindolol. A full understanding of the beneficial action of β blockade is lacking, but suggested mechanisms include attenuation of the adverse effects of high concentrations of cate-cholamines (including apoptosis), up-regulation of β receptors, decreased heart rate, and reduced remodeling through inhibition of the mitogenic activity of catecholamines.