HIV is primarily a sexually transmitted pathogen transmitted by high-risk behaviors, such as unprotected intercourse, male homosexual intercourse, and also by intravenous (IV) drug abuse. The tropism of the HIV for CD4-expressing T-cells and macrophages is the principal determinant of the pathogenicity of HIV. HIV shows tropism for all the cells expressing CD4 anti-gens on their cell surfaces. The CD4 antigens act as receptors for HIV. The virus infects helper T cells and kills them, result-ing in HIV-induced immunosuppression, leading to full-blown AIDS—a key feature of the pathogenesis of HIV infection. This makes the patient most susceptible to opportunistic infections and certain cancerous conditions, such as Kaposi’s sarcoma and lymphoma. However, the virus does not directly cause any tumor, because HIV genes are not found in these tumor cells.

In the genital tract, infection with HIV begins in Langerhans cells, the dendritic cells that line the mucosa. This is followed by infection of the local CD4 helper T cells in the genital tract and by the appearance of the virus in the blood 4–11 days after infec-tion. The CD4 receptors are present on CD4 T lymphocytes and also on the cells of the macrophage lineage, such as monocytes, macrophages, and alveolar macrophages of lungs, dendritic cells of the skin, and microglial cells of the brain (Fig. 68-3).gp120 protein is the principal determinant of pathogenicity of HIV. The Vy region of the gp120 determines cellular tropism of the virus. After HIV enters the host, gp120 binds selectively to the CD4 cell surface receptors and CCR5 or CXCR4 chemokine receptors expressed on macrophage lineage cells. 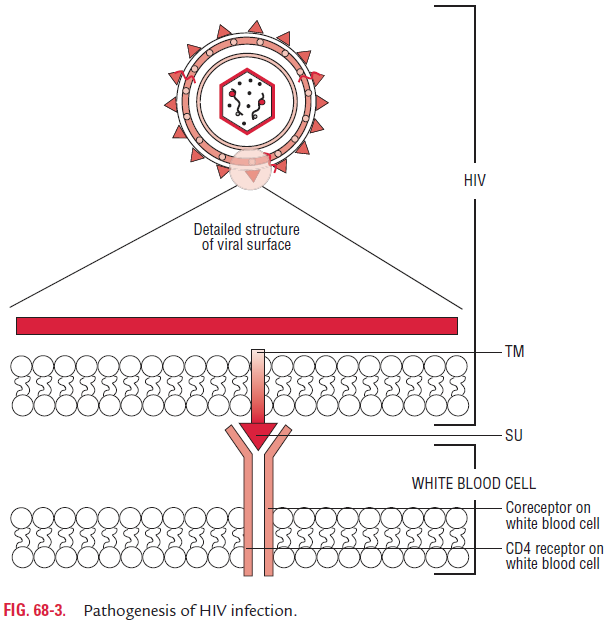 After gp120 binds to the receptor, the associated gp41 protein initiates the cell membrane fusion. After fusion with the host cell membrane, the virus loses its envelope and reverse transcription of RNA to DNA occurs. The reverse transcrip-tase ribonuclease mediates transcription of the RNA into double-stranded DNA provirus. The provirus is integrated into the genome of the infected cell causing latent infection. The long and variable incubation period of HIV is because of this latency. During the period of latency, there is a high level of viral replication. It is estimated that 10 billion HIV particles are produced and destroyed each day.

The gp120 present on the surface of the infected cell leads to fusion of the cells with the formation of multinucleated syncytia. The lysis of fused cells results in replenishment of a large number of uninfected cells from the circulation. HIV also causes accumulation of nonintegrated circular DNA copies of the genome, increased permeability of the plasma membrane, and induction of apoptosis. All these contribute to killing of the infected T cells. In addition, lysis of infected cell releases progeny virions to infect new cells. The CD4 cells are decreased in number, and the CD4:CD8 cell ratio is reversed. Viral infec-tion also suppresses the function of the infected cell without causing structural damage.

The virus replicates continuously in the lymph nodes, thereby releasing the virions and infected T cells into the blood.

During the course of infection, the virus causes a drastic reduc-tion in the number of CD4 T cells, which may occur due to HIV-induced cytolysis, cytotoxin T-cell immune cytolysis, or natural terminal differentiation of T cells.

The virus also infects brain monocytes producing multi-nucleated giant cells and significant central nervous system manifestations. The fusion of the HIV-infected cells in the brain and other sites is the key pathological finding.

HIV is characterized by development of both cell-mediated and humoral immunities against HIV-related proteins.

Cell-mediated immunity: Cellular immunity is characterizedby the development of cellular responses produced against HIV proteins. Suppression of cell-mediated T-cell immunity is the most profound consequence of HIV infection. CD4 helper T cell, monocytes, and macrophages are important components of CMI against HIV infection. The CD4 helper T cell plays a very important role in the outcome of immune responses. The CD4 helper cells are essential for (a) activation of macrophages and (b) induction of functions of cytotoxic T cells, natural killer cells and B cells, and a variety of soluble factors that stimulate growth and differentiation of lymphoid cells. HIV binds directly to the CD4 receptors of the T helper cells, resulting in gradual depletion of the T-cell population.

The deficiency or reduction of CD4 T cells leads to depres-sion of cellular immune response and impairment of humoral responses. The reduction of CD4 T cells is responsible for producing delayed-type hypersensitivity reaction that leads to opportunistic infections caused by many opportunistic patho-gens. This causes CMI to gradually fail (i) to mount cytotoxic T-cell response to virally infected cells, (ii) to form delayed-type hypersensitivity reaction, and (iii) to process new foreign substances presented to the immune system.

Monocytes and macrophages also play an important role in the dissemination and pathogenesis of HIV infection. CCR5 chemo-kine receptors are the major HIV coreceptors present on monocytes and macrophages, which appear to be the major cell types infected with HIV in the brain. These cells, therefore, con-tribute immensely for development of neurological manifesta-tions associated with HIV infection. In the lungs, infected pulmonary alveolar macrophages may also play a role in the devel-opment of interstitial pneumonitis observed in some HIV patients.

The macrophage-tropic strains of HIV are seen in large number early in the infection, and these strains are responsible even for transmission of the infection. The virus may enter brain through infected monocytes and release toxins to neurons as well as chemotactic factors that lead to infiltration of brain with inflammatory cells. The macrophage-tropic HIV viruses are usually not present, but may be present rarely in neurons, oligodendrocytes, and astrocytes.

Humoral immunity: Humoral immunity is characterized bythe development of neutralizing antibodies produced against p24, gp120, gp41, and various proteins in most of the

individuals infected with HIV. However, the level of neutralizing activities is low. In adults, antibody to gp120 develops several months after the initial viremia. The development of neutraliz-ing antibodies is associated with slow progression of disease in adults, children, and infants. The HIV escapes from the immune system of the host in many ways (Table 68-2).