HIV Virus: Classification and Properties of the Virus 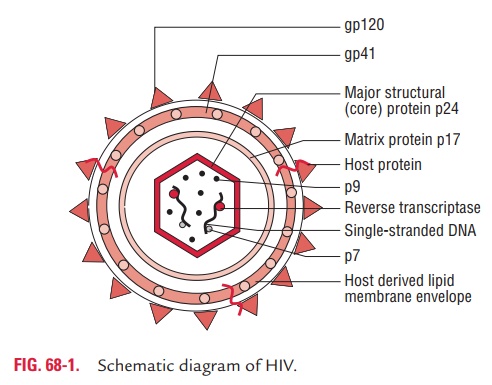 HIV is a Lentivirus, a sub family of Lentiviridae in the family retrovirus. This family includes the viruses known for (i) poor host immune responses, (ii) latency, (iii) persistent viremia, and (iv) infection of the central nervous system.

HIV is a Lentivirus, a sub family of Lentiviridae in the family retrovirus. This family includes the viruses known for (i) poor host immune responses, (ii) latency, (iii) persistent viremia, and (iv) infection of the central nervous system. HIV, like other ret-roviruses, are enveloped RNA viruses, characteristically pos-sessing an RNA-dependent DNA polymerase called reverse transcriptase.

HIV is a spherical, enveloped virus, which measures up to 120 nm in diameter (Fig. 68-1). It has a unique three-layered structure: (i) the innermost genome layer, (ii) middle cone-shaped nucleocapsid, and (iii) an outer membrane of glycopro-tein surrounded by lipoprotein envelope. 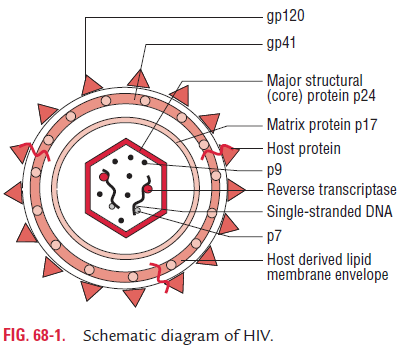 The gag gene encodes for internal capsid and matrix “core” proteins (p15, p18, and p24). Of these three proteins, p24 is the major antigen, which is demonstrated in serum of HIV patients during the early stage of infection and persists till the appear-ance of serum antibodies. Detection of p24 antigen in serum, therefore, is of diagnostic value.

The pol gene encodes for several proteins, including the enzymes reverse transcriptase, integrase, and protease. The enzyme reverse transcriptase synthesizes DNA by using the genome RNA as a template. The enzyme integrase inte-grates the viral DNA into the cellular DNA, and the enzyme protease cleaves various viral precursor proteins. The pol gene expresses precursor protein p160, which is cleaved into three proteins: p31, p51, and p64.

The env gene codes gp160, a precursor glycoprotein that is split to form two envelope glycoproteins, gp120 and gp41, which form the surface spikes and transmembrane tissue proteins, respectively.

Apart from these genes, it also consists of six other regula-tory genes (tat, rev, nef, vif, and vpr) including an additional gene vpu in HIV-1 and vpx in HIV-2.

Regulatory genes encode several proteins, which are essen-tial for transcription and invasion of virion into host cells. tat gene is the most important one, which encodes a proteincalled Tat protein that facilitates viral gene transcription. Tat protein along with other HIV-encoded regulatory pro-tein called Nef suppresses the synthesis of class I MHC 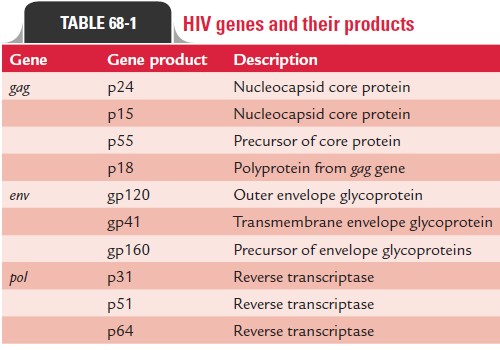 (major histocompatibility complex) proteins, thereby reducing the ability of cytotoxic T cells to kill the HIV-infected cells. The rev gene encodes another regulatory protein, which controlstransport of mRNA from the nucleus into the cytoplasm. The functions of the genes are summarized in Table 68-1.

Nucleocapsid: The viral genome is surrounded by a nucleo-capsid consisting of proteins. Three enzymes: (i) reverse transcriptase, (ii) integrase, and (iii) protease are located in the nucleocapsid.

·           Reverse transcriptase performs two important functions.First, it transcribes the RNA genome into the proviral genome. Second, it also has a ribonuclease H activity, which degrades the RNA when it is in the form of an RNA–DNA hybrid molecule. Degradation of the viral RNA genome is an essential step in the synthesis of double-stranded provi-ral DNA.

·           Integrase is other important enzyme, which facilitatesintegration of proviral DNA into the host cell DNA.

·           Protease is another enzyme, which splits precursor poly-proteins into functional viral polypeptides.

Envelope: The virus is surrounded by a lipoprotein envelope.The lipid component is derived from the host cell membrane and glycoproteins, which are virus coded. The major virus coded envelope glycoproteins are the projecting spikes on the surface and the anchoring transmembrane pedicles. The pro-jecting spikes combine with the CD4 receptors on susceptible host cells, and transmembrane pedicles cause cell fusion.

CXCR4 and CCR5 are the chemokine receptors, which are very much essential for entry of HIV into CD4 cells. The T-cell-tropic strains of HIV bind to CXCR4 and the 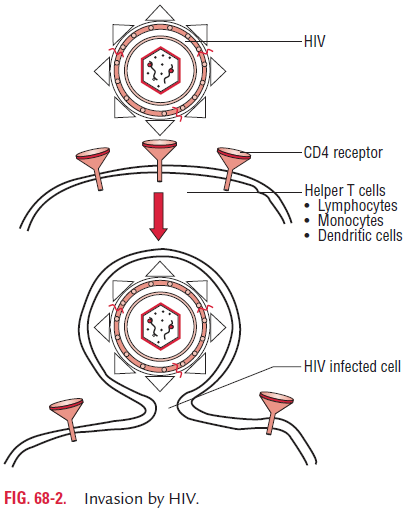 The immature virions containing the precursor polyproteins are assembled in the cytoplasm, and cleavage by the viral prote-ase occurs as the immature virion buds from the cell membrane, resulting in the production of mature infectious HIV.

Group-specific antigen: The protein p24 is the group-specificantigen present in the core of the virus. p24 is stable and does not show variations. Serum antibodies against p24 antigen are not protective and do not neutralize infectivity of HIV. But p24 is an important serological marker for diagnosis of HIV.

Type-specific envelope glycoproteins: gp120 and gp41are the type-specific envelope glycoproteins, which are pres-ent on the surface of the virus. gp120, which protrudes from the surface, is the most important that combines with CD4 receptors as well as the chemokine receptors on surface of CD4 cells. It shows many antigenic variants due to mutations in the gene that encodes the antigen. V3 loop is the most immunogenic region of the gp120 and also shows significant antigenic variations. Antibodies against gp120 neutralize the infectivity, but the rapid emergence of gp120 variants does not confer protection against new strains; hence it is difficult to produce an effective vaccine. gp41, which is embedded in the envelope, mediates the fusion of the viral envelope with the cell membrane at the time of infection.

HIV shows two distinct antigenic types: HIV-1 and HIV-2. The envelope antigens of both the types are different. Their core polypeptide shows some degree of cross-reactivity. HIV-2 is more closely related to simian immunodeficiency virus than to HIV-1.

HIV-1 represents the original isolates from Americas, Europe, and other Western countries, whereas HIV-2 isolates are originated from Western Africa. HIV-2 is more closely related to simian immunodeficiency virus than to HIV-1.

HIV-1 and HIV-2 strains based on sequence analysis of either gag or env genes have been classified into three groups: M (major/main), N (non-M, non-O/new), and O (other). The M group is the most prevalent group, which causes majority of HIV-1 infections. Group M consists of nine subtypes: A–D, F–H, J, and K; all of which have originated from Central Africa and are prevalent all over the world. Groups N and O include only some HIV-1 isolates from Central Africa, which do not belong to the group M.

HIV is a thermolabile virus. It is readily inactivated at 60°C in 10 minutes and at 100°C in seconds. The virus in dried blood, at room temperature (20–25°C), may survive for up to 7 days. The virus has been isolated from various tissues even up to 16 days at autopsy of the patient infected with HIV.

HIV is inactivated by treatment with 50% ethanol, 35% isopropanol, 0.5% lysol, 0.5% formaldehyde, 0.3% hydrogen peroxide, and 10% bleaching powder in 10 minutes. Bleaching powder is an effective disinfectant for use as surface decon-taminant at a concentration of 0.5%, with free chlorine 5 g/L (5000 ppm). A 2% solution of glutaraldehyde is effective for dis-infection of medical instruments.

In liquid plasma or in lyophilized blood products, HIV can be inactivated by heating at 56°C for 30 minutes. It is also inac-tivated at a very low pH (1) and high pH (13).