HIV infection is epidemic throughout the world.

HIV infection is epidemic throughout the world.

Since the first recognition of AIDS in the United States in 1981, the AIDS has become a worldwide disease, affecting a large number of population. The current estimate of world-wide disease prevalence is more than 38 million HIV infections.

As per estimation of the World Health Organization (WHO), 5 million new HIV infections are occurring each year; 90% of which are occurring in developing countries, generally in sub-Saharan Africa and Southeast Asia.

The HIV seroprevalence rate among pregnant women is highest in sub-Saharan Africa, which ranges from 35% to 45%. The seroprevalence rate in pregnant women in Asia is 2%, and the vertical transmission of HIV from infected mothers to infants is 24% without breast-feeding. It has been estimated that Indian mothers infected with HIV can have a transmission rate as high as 48% with breast-feeding. More than 4.4 million children are infected worldwide, and the death of 3.2 million children has been reported due to HIV infection.

India: The first incidence of HIV infection was documentedamong sex workers in Chennai, Madurai, and Vellore of Tamil Nadu in 1986–1987. The first case of AIDS was detected in the year 1986 from Mumbai. Since then, HIV infection has been documented from each part of India. The National AIDS Control Organisation (NACO), India has estimated that by the year 2008, nearly 2.4 million people were living with HIV, next only to South Africa. The national HIV prevalence is varied from 0.4% to 1.3%.

HIV is primarily a human infection. Humans infected with HIV and AIDS are the reservoir of infection. The high titer of HIV is found in the blood, semen, and vaginal secretions of the infected people; hence these are important sources of infection. The virus is also present in the breast milk of an infected mother. 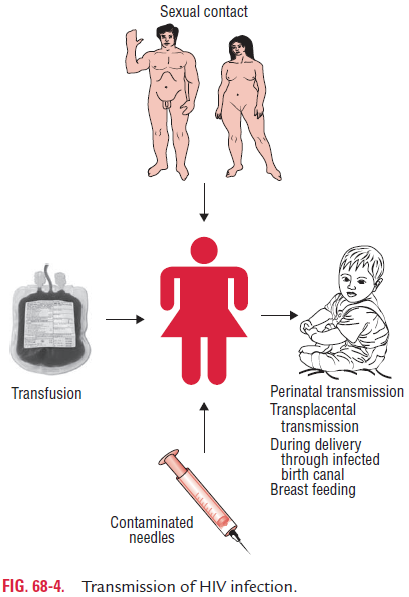 Sexual transmission: HIV is transmitted primarily throughsexual contact and constitutes more than 70% of the HIV trans-mission. Sexual transmission is more common in heterosexual women and men than in homosexual men worldwide. Varied sexual behaviors, such as (a) more number of sexual partners, (b) sex with commercial sex workers, homosexuals, and (c) receptive anal sex have been reported to be increasingly associated with HIV infection. The presence of other sexually transmitted disease, such as gonorrhea, syphilis, or herpes simplex virus type 2 infection increases the risk of sexual HIV transmission by more than 100 times. This is due to preexisting inflammation and ulcers caused by these diseases, which facilitate the transfer of HIV through mucosa. The risk to HIV significantly increases with an increase in the number of sexual contact with multiple partners.

HIV among health workers has also been documented following a needle stick injury with contaminated blood. However, the reported cases are relatively few, and the esti-mated risk of transmission is as low as 0.3%.

Parenteral transmission: Parenteral transmission occurs largelyamong IV drug users. Injection users of illicit drugs are commonly infected through the use of contaminated needles. IV drug users constitute a substantial proportion of new cases of HIV in north-eastern states of India, Manipur. The prevalence of HIV among injecting drug users in Manipur is increasing rapidly: from 2–3% in 1989 to more than 50% in 1991 and nearly 75% in early 2000. This increase is due to transmission of HIV through sharing of needles when injecting equipment is shared.

Sexually active person, both heterosexual and homosexual, IV drug abusers and their sexual partners, and the newborns of HIV-positive mothers are at highest risk for HIV infection.