The course of untreated HIV infection is usually 10 years or longer. The disease progresses through the stages of (a) primary infection, (b) dissemination of virus to lymphoid organs, (c) clinical latency, and (d) a late stage of profound immuno-suppression known as full-blown AIDS.

The course of untreated HIV infection is usually 10 years or longer. The disease progresses through the stages of (a) primary infection, (b) dissemination of virus to lymphoid organs, (c) clinical latency, and (d) a late stage of profound immuno-suppression known as full-blown AIDS. HIV is associated with following clinical syndromes:

Acute HIV infection is characterized by rapid rise in plasma vire-mia with a concomitant drop in CD4 count after an incubation period of 3–6 weeks. The symptoms of HIV are nonspecific and include low-grade fever, fatigue, malaise, rash, headache, and lymphadenopathy; spontaneous resolution may occur within weeks. HIV antibodies are usually absent in the serum at the onset of illness, but begin to appear after 3–4 weeks of the infec-tion. This condition is referred to as seroconversion illness. Serum antibodies are not demonstrated, but p24 antigen can be demonstrated during the beginning of the infection.

This period is followed by an asymptomatic or clinically latent stage during which the patient continues to remain asymptom-atic for several months to years. This stage is characterized by a low level of viral replication and a gradual fall in CD4 count. The serum is positive for HIV antibodies in these patients. Another characteristic of the stage of latency is persistent generalized lymphadenopathy, which may last for several years or a period of asymptomatic infection. During this stage, virus continues to replicate in the lymph node. The persistent generalized lymph-adenopathy denotes the presence of enlarged lymph nodes in two or more noncontiguous extrainguinal sites that persist for at least 3 months in the absence of any current illness or medica-tion that may cause lymphadenopathy. This is a benign condi-tion but may progress to AIDS-related complex (ARC) or AIDS.

AIDS-related complex is characterized by lymphadenopathy and fever. This has an insidious onset and may be associated with malaise and weight loss. Diarrhea, night sweats, fatigue, and opportunistic infections are the presenting symptoms. The patients with ARC may progress to AIDS in a few months.

AIDS is the end-stage disease of the HIV infection. It denotes the irreversible breakdown of immune system of the host, making the infected host highly susceptible to a wide range of progressive opportunistic infections or unusual malignancies, such as Kaposi’s sarcoma. AIDS is characterized by deteriora-tion of immune response as evidenced by CD4 T cell decrease response. The onset of clinical manifestations correlates with:

When CD4 count falls less than 200/ L, the patient develops full-blown AIDS. This stage is characterized by development of HIV wasting syndrome with weight loss and diarrhea for 1 month. This is also associated with many opportunistic infections, such as tuberculosis, Pneumocystis carinii pneu-monia, toxoplasmosis, cryptococcal meningitis, and other diseases. Patients with AIDS show clinical manifestations in different ways. They can manifest as lymphadenopathy with fever, opportunistic infections, malignancies, and neurological manifestations of HIV, such as dementia. 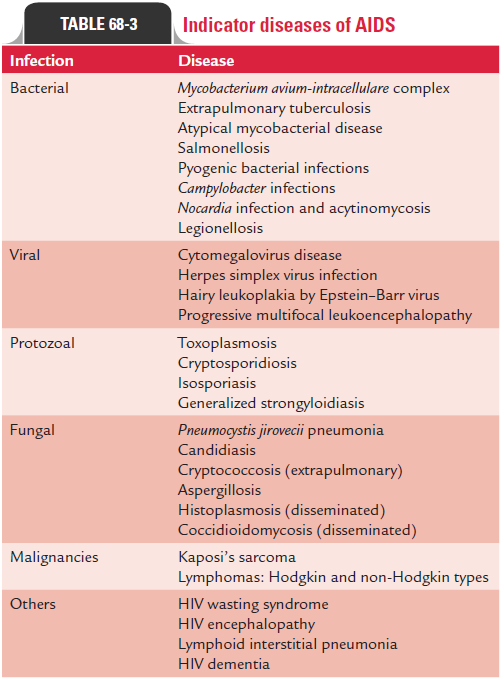 has shown to produce a protein that acts as chemokine receptor and facilitates HIV to infect the cells.

Malignancies: The patients with AIDS show a markedsusceptibility to the development of malignancies. Human herpes virus-8–associated Kaposi’s sarcoma is the most noted malignancy associated with AIDS. Kaposi’s sarcoma is much more common in untreated AIDS patients than in general population. It is a vascular tumor suggested to be of endothe-lial origin, which is found in the skin, mucous membrane, lymph node, and visceral organs

Neurological diseases: AIDS patients are associated withseveral distinct neurological syndromes. These include AIDS dementia complex, subacute encephalitis, vacuolar myelopa-thy, aseptic meningitis, and peripheral neuropathy. AIDS dementia complex is the most common neurological manifes-tation of HIV and occurs due to HIV infection of the microglial cells and neurons of the brain. This condition is characterized by poor memory, inability to concentrate, apathy, automotor retardation, and behavioral changes.

Toxoplasma encephalitis, cryptococcal meningitis, and John–Cunningham ( JC ) virus-induced progressive multifocal leukoencephalopathy are some of the common infectious diseases of the brain associated with patients of AIDS. Indicator diseases of AIDS are summarized in Table 68-3.

·           by vertical transmission of HIV from infected mother or

·           by perinatal transmission of HIV through breast-feeding.

Children develop clinical manifestations by 2 years of age and subsequently die of AIDS in the following 2 years. The condi-tion is more severe in neonates because the immune system is very poor during the time of birth. Clinical manifestations of AIDS in children include pneumonia, severe oral candidiasis, interstitial pneumonitis, encephalopathy, wasting, general-ized lymphadenopathy, hepatosplenomegaly, diarrhea, growth retardation, and bacterial sepsis.

The progression of vertically acquired HIV infection in chil-dren appears to have a trimodal distribution. Approximately, 15% of children have rapidly progressive disease and the remainder have a chronic progressive course or an infection pattern typical of that seen in adults.

Children with perinatally acquired HIV infection, if remain untreated, show a very bad prognosis. The progression of the infection is very fast in the first year of life and is believed to be associated with higher viral load of HIV-1 in the blood. The replication of the virus in children shows a different pattern than that seen in adults. Viral RNA load is usually low at birth, but the level of virus then increases rapidly within the first 2 months of life, followed by slow decline at the age of 2 years.

Progression of infection from acute HIV infection to AIDS occurs usually at a median 11 years after the infection. Earlier, many of the patients used to die within 1–2 years following diagnosis of AIDS, but now with the introduction of highly active antiretroviral therapy (HAART) and better management of opportunistic infections, the death rates from AIDS have begun to decline significantly. In India, mean duration of sur-vival of a patient after diagnosis of HIV is 7 years 8 months.