Laboratory diagnosis of HIV infection is useful to: a) Confirm the diagnosis of AIDS b) Detect the individuals with HIV infection c) Identify carriers who may transmit infections to others d) Perform seroepidemiological studies in the community

Laboratory diagnosis of HIV infection is useful to:

b)       Detect the individuals with HIV infection

c)        Identify carriers who may transmit infections to others

These include serum and plasma for HIV serology and lympho-cytes for isolation of HIV.

◗ Isolation of the virus

Virus isolation is not a routinely used method for diagnosis of HIV infection because it is time-consuming and laborious. It is used mostly for research purpose. The virus can be isolated mostly from lymphocytes in the peripheral blood and occasionally from bone marrow, plasma, and other body fluids. In patients with AIDS, high titer of virus is found in the plasma and in lymphocytes than in the peripheral blood. Viruses are found mostly within CD4 cells.

Cocultivation: It is the most sensitive method for isolation ofvirus. It is performed by cocultivating potentially infected and uninfected mononuclear cells to facilitate the replication of HIV. The viral growth in culture fluid is demonstrated by the presence of HIV p24 antigen and HIV reverse transcriptase. The test becomes positive after 7–14 days of culture or even may require a longer period of 28 days. The virus titer in asymptom-atic infection is low, hence may not be positive for virus by culture. Viral culture is useful for detection of high virus titer, which is found early in infection before the presence of HIV antibodies.

The diagnosis of HIV infection is established by demonstration of specific antibodies to envelope glycoproteins gp41, gp120, and gp160 and to viral core p24 antigens. The antibody response against these viral proteins is variable during the pro-gression of HIV infection to AIDS. Antibodies to envelope gly-coproteins persist in the serum, but those directed against Gag protein (p17, p24, p55) decrease.

The antibody-based serological testing in HIV is of two types: (a) screening tests and (b) supplementary or comfirma-tory tests.

Screening tests: Screening tests are otherwise known as ERSwhich is an acronym for enzyme-linked immunosorbent assay (ELISA), rapid test, and simple test. These tests are usually highly sensitive tests and are used for initial screening of the serum samples for the presence of HIV antibodies.

ELISA: ELISA is the most frequently used test for detection ofboth HIV-1- and HIV-2-specific antibodies in the serum. This test is highly sensitive and specific, and commercial ELISA kits are available, which detect both HIV-1 and HIV-2 antibodies in the serum. ELISA can also be used for demonstration of anti-bodies in the saliva. This is very useful for testing injectable drug users from whom it may be difficult to collect blood due to collapsed blood vessels. ELISA in HIV serology are of four types: first generation, second generation, third generation, and fourth generation depending on the nature of the antigen used and detecting both antibodies and antigen in the serum (Table 68-4). 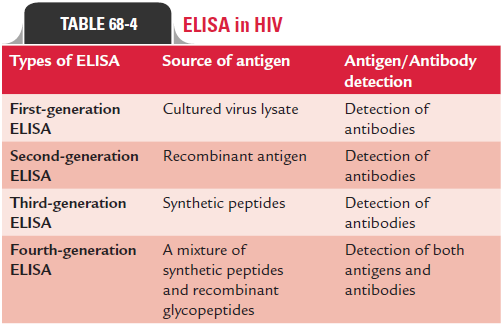 Rapid tests: Rapid tests include dot blot assay, latex agglutina-tion, gelatin agglutination, HIV spot, and comb test, etc. These tests are simple tests, which can be performed in any laboratory without requiring any expensive instrument or skilled man-power. Moreover, test results can be read rapidly within 30 minutes of receipt of the specimen.

Simple tests: These tests are simple, do not require any expensiveequipment, and can be performed within 1 or 2 hours.

Western blot: It is the most common confirmatory test used inHIV serology. In this test, HIV viral antigens are separated as gp160, gp120, p66, p55, p51, gp41, p31, p24, p17, and p15 depending on their electrophoretic mobility by polyacrylamide gel electrophoresis. These antigens are then blotted onto strips of nitrocellulose paper. These strips are treated with test serum. Antibodies to these HIV proteins, if present in test serum, com-bine with different fragments of HIV and then react with enzyme conjugated antihuman globulin. These strips are washed, fol-lowed by addition of a suitable substrate, which produces colored bands. The position of the colored band on the strip indicates the antigen with which the antibody has reacted (Fig. 68-5). The demonstration of multiple bands indicates a positive test.

·           The test is also considered positive if multiple bands are seen with multiple proteins, which are encoded by three genes (gag, pol, and env). This represents p24 of gaggene core protein, p31 of pol gene reverse transcriptase, gp41, gp120 or gp160 of env gene surface antigens.

·           The development of bands at one site as with p24 or gp120 is considered equivocal and may happen in early infection and also may be nonspecific.

It was earlier practice to confirm positive result of any one screening test by Western blot, but since the test is cumber-some, expensive, and is not readily available, other strategies are available for confirmation of the cases. So the practice followed now is to perform either two different types of ELISA or an ELISA with any of the rapid tests. If a serum is positive for HIV antibodies by both these tests, the serum is then considered positive for HIV. In case of doubt, serum samples are retested after a period of 1 or 2 months.

Other confirmatory tests: Line immunoassay in principle issimilar to Western blot; however, it differs from Western blot by having artificial HIV antigens used on the strips than using viral lysis protein separated by polyacrylamide gel electropho-resis. Indirect fluorescent antibody (IFA) is another test used as a confirmatory test.

Specific tests useful for laboratory diagnosis of HIV infec-tion and AIDS are summarized in Table 68-5.

CD4 T cell count: This is an important indicator for moni-toring HIV infection. This count reflects the immunological competence of the patients with HIV or AIDS. A rapid decrease in the CD4 count in adults and in infants is a poor prognostic sign and requires the initiation or alteration of antiviral ther-apy. The absolute number of CD4 lymphocytes and the ratio of helper T inducer lymphocytes (CD4:CD8 ratio) are very low in HIV-infected people. The CD4:CD8 T-cell ratio is reversed to 0.5:1 from a normal level of 2:1. If the CD4 count is below 500/ L, it indicates progression of the disease and hence requires specific therapy against HIV. When the count falls below 200/ L, it indicates a very poor prognosis and shows the increased risk for serious infection of patient, particularly opportunistic infections.

Measurement of HIV RNA: HIV RNA level in serum is animportant predictive marker of disease progression and are used as prognostic marker to monitor the effectiveness of anti-HIV therapies. The test is also useful for early diagnosis of HIV infection in infants born to infected mothers.

Measurement  of  B2 microglobulin and neopterin:

B2 microglobulin and neopterin can be demonstrated in the serum or urine of HIV-infected people. The titer is low in asymptomatic HIV infection, but is elevated with the progres-sion of HIV disease.

Tuberculin test or other tests for cell-mediated immunity is neg-ative, indicating a depressed cell-mediated immunity. Both IgE and IgA serum levels are elevated in the blood. Hematological parameters are altered in patients with HIV. There is a leukopenia with lymphocyte count less than 400/ L and thrombocytopenia in patients with AIDS. Hyperimmunoglobulinemia is associated with the progression of disease. Hypoimmunoglobulinemia is observed in end-stage disease and is associated with poor prog-nosis. Thrombocytopenia is a common finding in patients with HIV. Anemia occurs in as many as 25% of cases at diagnosis and occurs in 80% of cases after sometime. Neutropenia is observed in 10% of early asymptomatic HIV infections and in 50% of patients with AIDS.

The following are the three different strategies followed for HIV testing in India:

Strategy 1: In this strategy, test serum is subjected onceto ERS test, and if positive the sample is considered as HIV infected and if negative the serum is considered to be free of HIV. For this purpose usually highly sensitive and very reliable diagnostic kits are used. This strategy is used for screening of blood, organ, and tissue before transfusion and transplantation.

Strategy 2: In this strategy, a serum sample is considerednegative if the first ERS test report reports it so. But if positive, it is retested with a second ERS test based on different antigen preparation and different test principles. The serum specimen if also found positive with second ERS test, it is reported as positive, and otherwise it is considered as negative. This strategy is used for HIV surveillance.

Strategy 3: It is similar to strategy 2, but with an added confir-mation by a third ERS test. The third test should be based on different antigen preparation or test principle. A serum show-ing positive result on all three ERS tests is reported positive. The test is considered equivocal if the serum is negative in the third ERS. In such cases, serum specimens are retested on collection after 3 weeks. If this specimen also shows an equivocal result, the person is considered to be negative for HIV antibodies. This strategy is used for diagnosis of HIV infection in asymptom-atic persons. The tests used in second and third strategies are of higher specificity in order to rule out any false positivity.

Interpretation of various laboratory tests used in the diagnosis of HIV infections is summarized in Table 68-6. 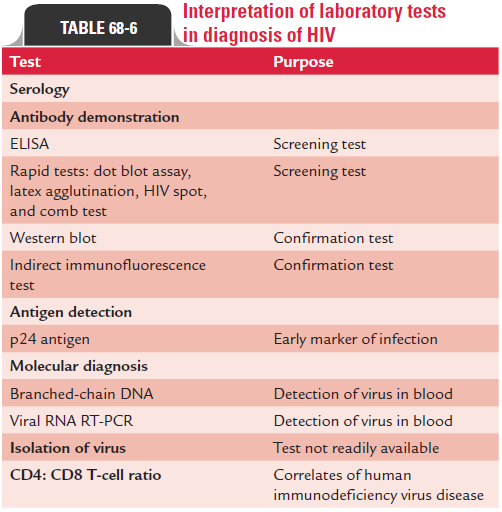