Many of the properties of chronic Chagas’ disease cited in support of the autoimmune hypothesis may also be possible with parasite-directed pathogenesis.

Since the studies reporting that autoimmunity may be involved in the inflammatory infiltrates of chronic Chagas’ disease are not conclusive, the alternative theory is that parasites residing in chronically infected host tissue may cause chronic disease by either damaging tissues directly or focusing the inflammatory response in host tissues.

Many of the properties of chronic Chagas’ disease cited in support of the autoimmune hypothesis may also be possible with parasite-directed pathogenesis. Parasites may be difficult to demon-strate in the lesions but that may be due to limitations of present techniques. We do know that chronically infected individuals harbor parasites, and the fact that not all chronically infected individuals develop chronic disease may reflect parasite bur-den, strain differences, or host variation in the immune response. The organ specific-ity may be due to tropism of the parasite for cardiac and neuronal tissues. Thus, the long lag time to develop disease may be due to the slowly progressive damage that is required to generate clinical disease.

Two other factors support the para-site-directed damage. First, immunosup-pression exacerbates, not ameliorates, the disease process and causes worsening of the pathologic lesions of Chagas’ dis-ease. However, one could argue that loss of the immune response permits contin-ued growth of the organism and damage. The second factor is that treatment with antiparasitic drugs in early Chagas’ dis-ease markedly lessened the progression to chronic disease, although the number of patients assigned to treatment versus placebo groups was small. 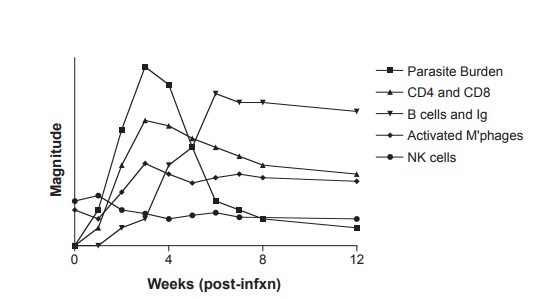