A large body of both immunological and epidemiological evidence has implicated the group A streptococcus in the induction of the disease process.

A large body of both immunological and epidemiological evidence has implicated the group A streptococcus in the induction of the disease process. Yet, the precise pathological mechanisms involved in the process remain obscure. At least three main theories have been proposed.

The first theory is concerned with the question of whether persistence of the organism is important. Despite several controversial reports, no investigators have been able to consistently and reproducibly demonstrate live organisms in rheumatic fever joints, cardiac tissues, or valves.

The second theory focuses on whether deposition of toxic products is required. Although an attractive hypothesis, little or no experimental evidence has been obtained to support this concept. Renewed interest in extracellular toxins has recently emerged with the observation that certain strepto-coccal pyrogenic exotoxins (A and C) may act as superantigens. These antigens may stimulate large numbers of T cells through their unique bridging interaction with T-cell receptors of specific Vβ types and class II MHC molecules. This interaction is clearly distinct from conventional antigen presentation in the context of MHC. Once activated, these cells elaborate tumor necro-sis factor, gamma interferon, and a number of interleukin moieties, thereby contribut-ing to the initiation of pathological damage. Furthermore, it has been suggested that in certain disease states such as rheumatoid arthritis, autoreactive cells of specific Vβ lineage may “home” to the target organ. Although this is an attractive hypothesis, no data concerning the role of these superanti-gens in ARF have been forthcoming.

Perhaps the best evidence to date favors the theory of an abnormal host immune response (both humoral and cellular) in the genetically susceptible individual to those streptococcal antigens cross-reactive with mammalian tissues. The evidence support-ing this theory can be divided into three broad categories:

1.   Employing a wide variety of methods, numerous investigators have docu-mented the presence of heart-reactive antibodies (see Figure 12.3) in ARF sera. The prevalence of these antibodies has varied from a low of 33 percent to a high of 85 percent in various series. Although these antibodies are seen in other individuals (notably those with uncomplicated streptococcal infections that do not go on to rheumatic fever and patients with poststreptococcal glo-merulonephritis), the titers are always lower than that seen in rheumatic fever and decrease with time during the con-valescent period (Figure 12.4). 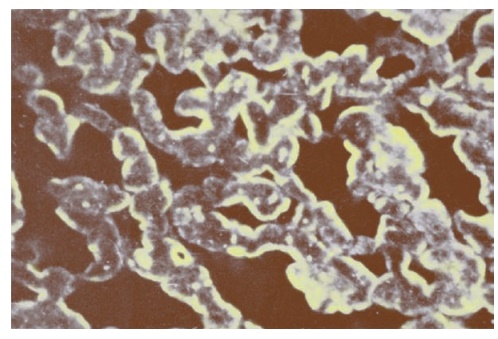 Figure 12.3 Photomicrograph of immunofluorescent staining of heart sections with a serum from an acute rheumatic fever patient followed by a fluorescein-tagged antihuman IgG goat serum. Note the intense sarcolemmal staining pattern of the serum. Identical results were obtained with rabbit sera immunized with Group A streptococcal cell walls but not Group D walls.

In terms of diagnosis and progno-sis, it is important to observe that these heart-reactive antibody titers decline over time. By the end of three years, these titers are essentially undetect-able in patients who had only a single attack (see Figure 12.4) This pattern is consistent with the well-known clinical observation that recurrences of rheu-matic fever most often occur within the first two to three years after the initial attack and become rarer five years after an initial episode. 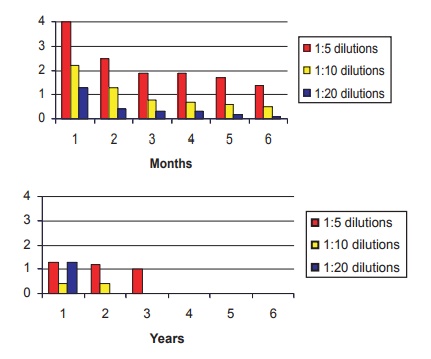 As illustrated in Figure 12.5, this pat-tern of titers also has prognostic value. During the two- to five-year period after the initial attack, patient M.P.’s heart-reactive titers dropped to undetectable levels. However, with a known break in prophylaxis starting in year 6, at least two streptococcal infections occurred,

as evidenced by rise in antistreptolysin O (ASO) titers during that period. Of note was the concomitant rise in heart-reactive antibody titers. The final infection was followed by a clinical recurrence of classical rheumatic cardi-tis complete with isolation of the organ-ism, elevated heart-reactive antibodies, and acute-phase reactants eleven years after the initial attack.

2.   Sera from patients with ARF also con-tain increased levels of antibodies to both myosin and tropomyosin, as com-pared with sera from patients with pha-ryngeal streptococcal infections that do not develop ARF. These myosin-affinity purified antibodies also cross-react with M protein moieties (known to share amino acid homology with myosin), suggesting this molecule could be the antigenic stimulus for the production of myosin antibodies in these sera.

3.   Finally, as indicated earlier, autoim-mune antibodies are a prominent find-ing in another major clinical manifes-tation of ARF, namely, Sydenham’s chorea, and these antibodies are directed against the cells of the caudate nucleus. The titers of this antibody cor-respond with clinical disease activity.

At a cellular level, there is now ample evidence for the presence of both lym-phocytes and macrophages at the site of pathological damage in the heart valves in patients with ARF (see Figure 12.6). The cells are predominantly CD4+ helper lymphocytes during acute stages of the disease (4:1). The ratio of CD4+/CD8+ lym-phocytes (2:1) more closely approximates the normal ratio in chronic valvular speci-mens. A majority of these cells express DR antigens. A potentially important finding has been the observation that macrophage-like fibroblasts present in the diseased valves express DR antigens and might be the antigen-presenting cells for the CD4+ lymphocytes. Increased cellular reactiv-ity to streptococcal antigens has also been noted in the peripheral blood mononuclear cell preparations of ARF patients when compared with these cells isolated from 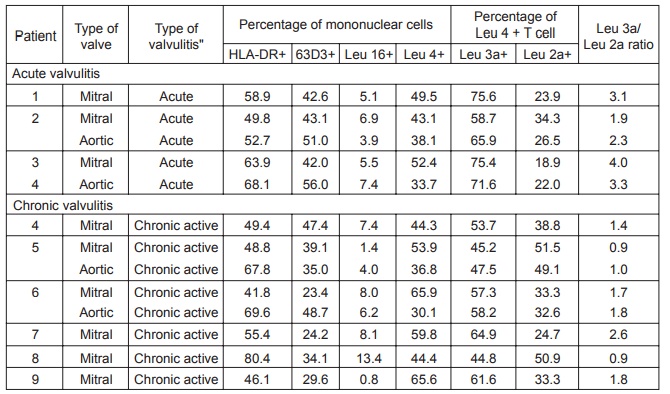 nephritis patients. This abnormal reactiv-ity peaks at six months after the attack but may persist for as long as two years after the initial episode. Once again, the reactiv-ity was specific only for those strains asso-ciated with ARF, suggesting an abnormal humoral and cellular response to strepto-coccal antigens unique to rheumatic fever– associated streptococci.

The observation that lymphocytes obtained from experimental animals sensi-tized to cell membranes but not cell walls are specifically cytotoxic for syngeneic embryonic cardiac myofibers in vitro fur-ther strengthens support for the potential pathologic importance of these T cells. In humans, normal mononuclear cells primed in vitro by M protein molecules from a rheumatic fever–associated strain are also cytotoxic for myofibers, but specificity solely for cardiac cells was lacking in the human studies. Similar studies have not yet been performed using lymphocytes from active ARF patients.

It has been known for years that often the early symp-toms of chorea may present as emotional or behavioral changes in the patient and only later do the choreiform motor symp-toms appear. Years after the choreiform symptoms subsided a number of chorea patients presented with behavioral disor-ders such as tics or obsessive-compulsive disorders (OCD). 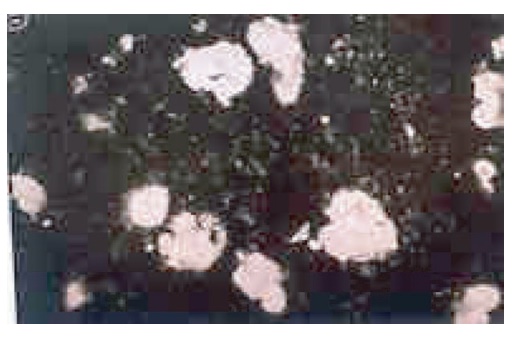 These earlier observations coupled with the known presence of antibrain antibodies in the sera of Sydenham’s chorea patients (see Figure 12.7) raised the question of whether a prior streptococcal infection (or infection with other microbes) might induce antibodies cross-reactive with brain antigen(s) involved in neural path-ways associated with behavior. Two recent papers indicate a strong association of the D8/17 B-cell marker with children with OCD. While Swedo and colleagues selected patients on the basis of a strong history of prior streptococcal infections, Murphy and colleagues noted a strong association of the marker with OCD patients without a his-tory of streptococcal infections. These pre-liminary studies suggest that streptococci and probably other microbes may induce antibodies, which functionally disrupt the basal ganglia pathways leading not only to classical chorea but also to other behav-ioral disorders in these children without evidence of classical chorea.

Second, the use of the D8/17 monoclo-nal antibody has also proved helpful in the differential diagnosis of ARF from other disorders. In our hands, all rheumatic fever patients express abnormal levels of D8/17-positive B cells, especially during the acute attack. In those cases where the diagnosis of ARF has been doubtful, pres-ence of elevated levels of D8/17-positive B cells has proven to be helpful in estab-lishing the correct diagnosis.