Epidemiology and Pathogenesis of Rheumatic Fever

The incidence of ARF actually began to decline long before the introduction of antibiotics into clinical practice, decreasing from 250 to 100 patients per 100,000 population from 1862 to 1962 in Denmark.

The incidence of ARF actually began to decline long before the introduction of antibiotics into clinical practice, decreasing from 250 to 100 patients per 100,000 population from 1862 to 1962 in Denmark (see Figure 12.1). Why the decline occurred is not entirely clear, but better hygiene, improved economic conditions, and less crowding were certainly important factors. 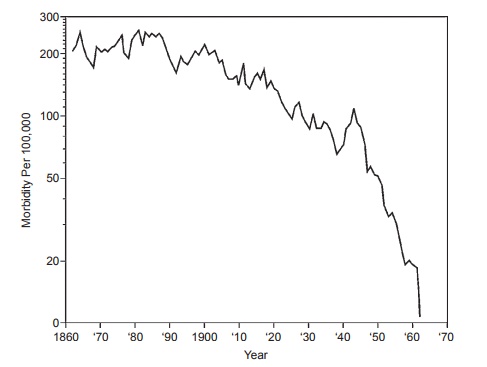 Figure 12.1 Data demonstrating the decline of mortality rates of rheumatic fever long before the advent of penicillin and then the precipitous drop after its introduction.

The introduction of antibiotics in 1950 rap-idly accelerated this decline, until by 1980, the incidence ranged from 0.23 to 1.88 patients per 100,000, primarily in children and teenagers in the United States. A nota-ble exception has been in the Australian aborigines (125/100,000) and the native Hawaiian and Maori populations (both of Polynesian ancestry), where the incidence continues to be 13.4/100,000 hospitalized children per year.

Whether certain M-type strains are more “rheumatogenic” than others remains controversial. Certain investigators have stated that M protein types 5, 14, 18, and 24 are mainly associated with outbreaks, but in the large series collected in the Great Lakes Naval Station of ARF during World War II, the main strains were types 17, 19, and 30. In the Caribbean and in Latin America, the main ARF strains are 11 and 41. Thus, whether certain strains are more “rheumatogenic” than others remains unresolved. What is true, however, is that a streptococcal strain capable of causing a well-documented pharyngitis is generally capable of causing ARF.

Although there is little evidence for the direct involvement of group A streptococci in the affected tissues of ARF patients, a large body of epidemiological and immu-nological evidence indirectly implicates the group A streptococcus in the initiation of the disease process: (1) It is well known that outbreaks of ARF closely follow epi-demics of either streptococcal sore throats or scarlet fever. (2) Adequate treatment of a documented streptococcal pharyngitis markedly reduces the incidence of subsequent ARF. (3) Appropriate anti-microbial prophylaxis prevents the recurrences of disease in known patients with acute ARF.

A note of caution is necessary concerning documentation (either clinically or micro-biologically) of an antecedent streptococ-cal infection. The frequency of isolation of group A streptococci from the oropharynx is extremely low during the acute stage of rheumatic fever even in populations with limited access to antibiotics. Further, there appears to be an age-related discrepancy in the clinical documentation of an ante-cedent sore throat. In older children and young adults, the recollection of a strepto-coccal sore throat approaches 70 percent; in younger children, this rate approaches only 20 percent. Thus, it is important to have a high index of suspicion of ARF in children or young adults presenting with signs of arthritis or carditis even in the absence of a clinically and microbiologically docu-mented sore throat.

Another intriguing, yet unexplained observation has been the invariable asso-ciation of ARF only with streptococcal pharyngitis. Although there have been many outbreaks of streptococcal skin infec-tions (impetigo), ARF almost never occurs following infection with these strains. Furthermore, in Trinidad, where both impetigo and ARF are concomitant infec-tions, the strains colonizing the skin are dif-ferent from those associated with ARF and did not influence the incidence of ARF.