Paraquat and diquat are widely used herbicides which belong to the bipyridyl group.

Paraquat and diquat are widely used herbicides which belong to the bipyridyl group.* Paraquat is 1,1-dimethyl-4,4-bipyridy-lium dichloride, and was first synthesized in 1882, but began to be used as a herbicide only since the 1960s. It is available either in granular form (25–80 gm/kg) or as water soluble concen-trate which is an odourless brown liquid (100–200 gm/L). The granular form is available as colourless crystals (dichloride salt) or a yellow solid (bis(methyl sulfate) salt). In India, most of the concentrates of paraquat are available as 10–20% solu-tions, and therefore 10 ml of a 20% solution can contain about 2 grams of paraquat. Common brand names include Weedol, Gramoxone and Uniquat.

Diquat is 1,1- ethylene-2,2-dipyridylium dibromide, and is less commonly used than paraquat. It has the same indica-tions and mode of action as paraquat but produces much less severe pulmonary lesions.

Absorption through inhalation, skin contact, or eye contact is minimal, though prolonged contact can be hazardous. On ingestion, paraquat solution is much more rapidly absorbed than the granular form. After absorption it tends to accumu-late in the lungs and kidneys. Paraquat has a large volume of distribution (1.2 to 1.6 L/kg). More than 90% of an absorbed dose is excreted by the kidneys as the parent compound within 12 to 24 hours. Paraquat is distributed into all organs. Highest concentrations are found in kidney and lung; paraquat also accumulates in muscle tissue, which may represent a reservoir, explaining prolonged detection of plasma or urine paraquat weeks or months following ingestion.

■■   Paraquat is a rapidly-acting herbicide. It kills the tissues of green plants by contact action with foliage and by some amount of translocation to the xylem.

■■Corneal injury and protracted opacification of the cornea may result following eye exposure to paraquat. Extensive loss of superficial areas of the corneal and conjunctival

epithelium may occur. Healing, although slow, is usually complete if given prompt medical care.

■■  Irritation of the skin and mucous membranes may be severe following paraquat exposure.

■■  After ingestion, sore throat and difficulty in swallowing can occur. Irritation of the gut including abdominal pain, nausea, vomiting, and diarrhoea may occur immediately following ingestion. Concentrated solutions of paraquat corrode the GI mucosa. Tachycardia, hypotension, and cardiorespiratory arrest can occur with large ingestions. Cerebral oedema may occur. Pancreatitis may develop in some cases of acute paraquat poisoning, and can cause severe abdominal pain.

■■  The maximum damage is seen in the lungs where cellular injury is initiated by the NADPH-dependant reduction of paraquat to the monocation radical (PQ+). Reaction with molecular oxygen yields the superoxide radical (O2-) and reforms the paraquat dication, ready to be reduced again. This process known as redox cycling is sustained by the extensive supply of electrons and oxygen in the lungs. This and the subsequent reactions explain why oxygen enhances the toxicity of paraquat, and paraquat enhances the toxicity of oxygen. Two superoxide species form hydrogen peroxide in a reaction catalysed by superoxide dismutase. Superoxide and hydrogen peroxide undergo a series of iron-catalysed reactions to yield the hydroxyl radical (OH) which is thought to be the ultimate toxic element. The hydroxyl radical causes degradation of cell membranes through lipid peroxidation resulting in cellular death.

Estimated lethal dose is 10 to 15 ml of the concentrate. Ingestion of 20 to 40 mg of paraquat ion per kg body weight (7.5–15.0 ml of 20% (w/v) paraquat concentrate) results in death in most cases. Prudence requires that all cases of paraquat ingestion be treated as potentially fatal poisonings.

o     Initial Phase—pain in the mouth, oesophagus, and stomach due to corrosion, vomiting, diarrhoea, dysphagia, aphonia. There may be gastric perforation/ GI haemorrhage.

o     Second Phase—begins after 2 to 5 days and is char-acterised by renal and hepatic toxicity, i.e. renal tubu-lopathy and centrilobular hepatic necrosis respectively. Although hepatic injury from exposure to paraquat may be quite severe, clinical outcome is generally not determined by hepatotoxic effects.

o     Third Phase—begins after 5 days and is characterised by pulmonary fibrosis which leads to progressive respiratory failure.

There is rapid development of cardiogenic shock ending in death in 3 to 4 days. Renal and hepatic lesions are also common.

·      Subacute Form: (ingestion of less than 30 mg/kg ofparaquat) This is characterised only by gastrointestinal manifesta-tions.

Mortality in paraquat poisoning can be high and is related to two factors—concentration and quantity. Ingestion of 20% solution is associated with high mortality. Swallowing more than a mouthful can cause death in 72 hours because it corre-sponds to ingestion of more than 50 mg/kg. If it is less than a mouthful, death may be delayed upto 70 days and is usually due to pulmonary fibrosis. Pneumothorax, pneumopericardium and subcutaneous emphysema may develop in patients with paraquat induced lung injury.

Survivors of severe paraquat poisoning often develop progressive pulmonary fibrosis within 5 to 10 days or longer after exposure. Continued survival is dependant on the extent of lung involvement.

Occupational exposure to paraquat can cause a dry, cracking dermatitis and nail atrophy.

·      X-ray of the chest may reveal patchy infiltration in the early stages, and opacification of one or both lung fields in later stages. However, if death is due to the hyperacute form of presentation, no abnormalities may be noted on the chest X-ray.

·      Plasma paraquat level can be assayed by spectroscopy, radioimmunoassay, or HPLC. Serum levels greater than 0.2 mcg/ml at 24 hours, and 0.1mcg/ml at 48 hours are associated with high mortality.

·      Urine paraquat level can be assayed by spectrophotometry. Survival is usually associated with levels less than 1mcg/ ml, while mortality is high when the level exceeds 10 mcg/ ml.

·      When submitting samples for chemical analysis it must be ensured that only plastic containers are used, since paraquat binds to glass.

·              All cases of paraquat ingestions should be considered as medical emergencies even if the patient is asymptomatic.

·      Perform upper gastrointestinal endoscopy to identify the extent and severity of corrosion.

·              Stomach wash may be beneficial only if done within 1 hour of ingestion. Emesis and cathartics are contraindicated. Activated charcoal is of doubtful value.

·      Pain due to corrosion may be relieved by ice-cold fluids (e.g. ice cream), mouthwashes, local anaesthetic sprays, and lozenges. Opiates may be required in some cases.

·      Haemodialysis or haemoperfusion may be beneficial if undertaken within the first 10 to 12 hours.

·      Supportive measures form the mainstay of treatment : protection of airway, maintenance of circulation, treatment of secondary infection, prevention or treament of renal failure, and treatment of complications. Oxygen mustnot be administered as far as possible since it enhances lung damage. Allow additional oxygen only in victimsconsidered beyond rescue to relieve air hunger and terminal disease.

·      N-acetylcysteine may be of value. There are indications that if intravenous n-acetylcysteine and early haemodialysis (within 4 hours of ingestion) are undertaken, survival rate may improve.

·      The combination of corticosteroids and cyclophospha-mide has shown promise in reducing paraquat mortality, although efficacy has not been proven in prospective controlled clinical trials. In one prospective, randomised study, patients received gastric lavage followed by activated charcoal instillation, two 8-hour haemoper-fusion sessions against activated charcoal, and 10 mg intravenous dexamethasone every 8 hours for 14 days. The patients randomised into the treatment group also received at the end of haemoperfusion 1 gram of intra-venous methylprednisolone daily for days 1, 2, and 3, and cyclophosphamide 15 mg/kg daily for days 2 and 3 of pulse therapy. In a single case reported separately, recovery was achieved in a severely poisoned paraquat patient by a second pulse of methylprednisolone on day 30 when pulmonary inflammation and hypoxaemia emerged despite steady daily therapy of dexamethasone after the first pulse therapy. More study of a larger number of severely poisoned patients must be performed to confirm or refute benefit of this approach before it can be recommended as a standard treatment.

·      Non-steroidal anti-inflammatory agents, colchicine, collagen synthesis inhibitors, desferrioxamine, or total exclusion from external respiration may prevent lung fibrosis. However, the efficacy of these treatments has yet to be established in the treatment of human paraquat poisonings.

·      Pulmonary damage may be ameliorated by radiotherapy. However the current consensus is NOT to undertake radio-therapy because of lack of clinical evidence of efficacy.

Lung transplantation has not met with success in most cases where it was attempted, though some recent reports indicate that it could be beneficial. Nitric oxide inhalation to maintain tissue oxygenation in anticipation of lung trans-plantation once all absorbed paraquat has been eliminated, is recommended by some investigators.

·              Ulceration around lips and mouth, reddened or desquamated oral and oesophageal mucosa (Fig 28.1), erosion and patchy haemorrhages in the stomach. 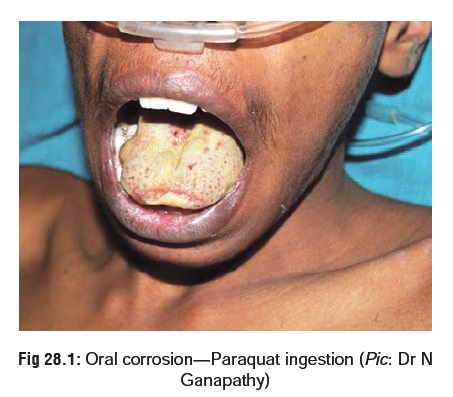