Acute pesticide poisoning is a serious global problem accounting for an estimated 3 million cases of severe poisoning worldwide each year, with approximately 220,000 deaths.

Acute pesticide poisoning is a serious global problem accounting for an estimated 3 million cases of severe poisoning worldwide each year, with approximately 220,000 deaths. More than 90% of these cases are reported from developing countries such as India. In the UK, pesticides are responsible for only about 1% of deaths from poisoning while various studies in India indicate that the figures range from 20% to a staggering 70%. In the paediatric age group domestic pesticides can account for a substantial number of poisoning cases. Among the various pesticides, organophosphates and carbamates account for most of the reported cases of poisoning, though aluminium phosphide is making relentless inroads, especially in Northern and Central India. Suicidal exposure to these pesticides is invariably via the oral route, though a few cases have involved self-injection (Fig 28.2). 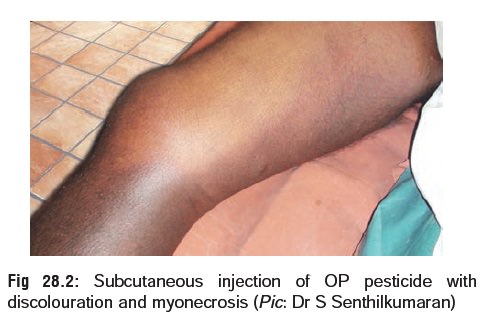 The terrible potential for pesticides to cause mass poisoning was not realised in India till the Kerala food poisoning tragedy in 1958. Wheat flour and sugar had been inadvertently stored in the same cabin on a ship as parathion, which leaked into the packages containing the former. Over a thousand people were poisoned subsequently due to consumption of the contaminated material and more than a hundred died. More recently (late 1970s), a severe convulsive epidemic broke out among several hundred people in Uttar Pradesh due to shocking ignorance on the part of farmers who were preserving food grains with BHC. Another (even more recent) incident involved accidental spraying of BHC in concentrated form in a thickly populated area leading to similar mass morbidity.

Unfortunately, lessons are not learnt from history and even today instances of negligent storage of food grains, sugar, vegetables, and fruits along with toxic pesticides leading to large scale contamination are not uncommon. Pesticide contamination of vegetables is an even bigger problem in India as compared to many other countries. In fact the contamination of food with pesti-cides resulting from excessive crop spraying or improper storage is so widespread in India, that blood samples and milk samples (from lactating mothers) collected randomly from several people in one study demonstrated residual insecticide levels in most of the samples.

Exposure to pesticides can occur in other ways. A study of offices sprayed with diazinon, chlorpyrifos, or bendiocarb revealed in many cases that surface concentrations were higher at 24 or 48 hours than at 1 hour after spraying. Occupants should be warned of treatment times and steps taken to mini-mise exposure. Health care professionals may be exposed to cholinesterase inhibitors while caring for patients.

Hospitals need to plan for such emergencies by having access to large stores of atropine, toxic waste disposal, and individual ventila- tion systems. Organophosphates found in veterinary products may be a source of poisoning for veterinarians, veterinary technicians, groomers, pet owners, and domestic pets.

Vietnam veterans potentially exposed to chlorophenoxy herbi- cides were noted to have chronic liver abnormalities. However, a study of 350 patients suggested that viral and alcoholic complica- tions, rather than herbicides, were the causative factors.

Organophosphates which are very rapid-acting, such as tabun, sarin, soman, and VX, have been developed as “nerve gases” for chemical warfare. Human exposure secondary to terrorist activity has occurred. The most notable case of sarin use by a terrorist group occurred in March, 1995, where sarin was released in a subway system of Tokyo, Japan. Estimates are that 1,000 people were affected by the attack with 12 deaths.

Organophosphates may be deliberately ingested by cocaine abusers in an attempt to prolong cocaine effects by decreasing cholinesterase activity. Symptomatic organophosphate poisoning has been reported in this setting.

In order to curb the incidence of accidental poisoning resulting from occupational exposure, negligent handling, as well as contamination of water, milk, and food stuff, several clauses have been incorporated in the Insecticides Act of 1968, and the Insecticides Rules of 1971.

Since several organochlorine pesticides have been banned (including DDT and BHC) from 1997 onwards, the incidence of poisoning involving these compounds has been declining. However, cases are still reported owing to surreptitious use.

Today, many household insecticides consist of carbamates and pyrethroids and hence poisoning involving them are on the rise, particularly among children.

Poisoning due to other pesticides is relatively uncommon except among individuals who are occupationally exposed.

Owing to easy availability, pesticides such as organophos- phates and carbamates have always been extremely popular in India for the purpose of committing suicide. In recent times, aluminium phosphide has begun to find increasing favour and has in fact edged out the other insecticides from the top spot in some states.

Homicidal poisoning involving pesticides has always been rare owing to disagreeable odour/taste, which most of these chemicals possess. Significant exceptions include thallium and arsenical compounds. However, cases have been reported even with other pesticides. One case report documents two child murders accomplished with paraquat.