With the exponential growth in the performance and capacity of semiconductor devices and memories, faster microprocessors with larger and larger primary memories are continually becoming available. To match this growth, it is natural to expect that secondary storage technology must also take steps to keep up with processor technology in performance and reliability.

A major advance in secondary storage technology is represented by the development of RAID, which originally stood for Redundant Arrays of Inexpensive Disks. More recently, the I in RAID is said to stand for Independent. The RAID idea received a very positive industry endorsement and has been developed into an elab-orate set of alternative RAID architectures (RAID levels 0 through 6). We highlight the main features of the technology in this section.

A second qualitative disparity exists between the ability of special microprocessors that cater to new applications involving video, audio, image, and spatial data processing (see Chapters 26 and 30 for details of these applications), with corresponding lack of fast access to large, shared data sets.

For an array of n disks, the likelihood of failure is n times as much as that for one disk. Hence, if the MTBF (Mean Time Between Failures) of a disk drive is assumed to be 200,000 hours or about 22.8 years (for the disk drive in Table 17.1 called Cheetah NS, it is 1.4 million hours), the MTBF for a bank of 100 disk drives becomes only 2,000 hours or 83.3 days (for 1,000 Cheetah NS disks it would be 1,400 hours or 58.33 days). Keeping a single copy of data in such an array of disks will cause a significant loss of reliability. An obvious solution is to employ redundancy of data so that disk failures can be tolerated. The disadvantages are many: additional I/O operations for write, extra computation to maintain redundancy and to do recovery from errors, and additional disk capacity to store redundant information.

One technique for introducing redundancy is called mirroring or shadowing. Data is written redundantly to two identical physical disks that are treated as one logical disk. When data is read, it can be retrieved from the disk with shorter queuing, seek, and rotational delays. If a disk fails, the other disk is used until the first is repaired. Suppose the mean time to repair is 24 hours, then the mean time to data loss of a mirrored disk system using 100 disks with MTBF of 200,000 hours each is (200,000)2/(2 * 24) = 8.33 * 108 hours, which is 95,028 years.13 Disk mirroring also doubles the rate at which read requests are handled, since a read can go to either disk. The transfer rate of each read, however, remains the same as that for a single disk.

Another solution to the problem of reliability is to store extra information that is not normally needed but that can be used to reconstruct the lost information in case of disk failure. The incorporation of redundancy must consider two problems: selecting a technique for computing the redundant information, and selecting a method of distributing the redundant information across the disk array. The first problem is addressed by using error-correcting codes involving parity bits, or specialized codes such as Hamming codes. Under the parity scheme, a redundant disk may be considered as having the sum of all the data in the other disks. When a disk fails, the missing information can be constructed by a process similar to subtraction.

For the second problem, the two major approaches are either to store the redundant information on a small number of disks or to distribute it uniformly across all disks. The latter results in better load balancing. The different levels of RAID choose a combination of these options to implement redundancy and improve reliability.

The disk arrays employ the technique of data striping to achieve higher transfer rates. Note that data can be read or written only one block at a time, so a typical transfer contains 512 to 8192 bytes. Disk striping may be applied at a finer granularity by breaking up a byte of data into bits and spreading the bits to different disks. Thus, bit-level data striping consists of splitting a byte of data and writing bit j to the jth disk. With 8-bit bytes, eight physical disks may be considered as one logical disk with an eightfold increase in the data transfer rate. Each disk participates in each I/O request and the total amount of data read per request is eight times as much. Bit-level striping can be generalized to a number of disks that is either a multiple or a factor of eight. Thus, in a four-disk array, bit n goes to the disk which is (n mod 4). Figure 17.13(a) shows bit-level striping of data.

The granularity of data interleaving can be higher than a bit; for example, blocks of a file can be striped across disks, giving rise to block-level striping. Figure 17.13(b) shows block-level data striping assuming the data file contains four blocks. With block-level striping, multiple independent requests that access single blocks (small requests) can be serviced in parallel by separate disks, thus decreasing the queuing time of I/O requests. Requests that access multiple blocks (large requests) can be parallelized, thus reducing their response time. In general, the more the number of disks in an array, the larger the potential performance benefit. However, assuming independent failures, the disk array of 100 disks collectively has 1/100th the reliability of a single disk. Thus, redundancy via error-correcting codes and disk mirroring is necessary to provide reliability along with high performance.

Different RAID organizations were defined based on different combinations of the two factors of granularity of data interleaving (striping) and pattern used to compute redundant information. In the initial proposal, levels 1 through 5 of RAID were proposed, and two additional levels—0 and 6—were added later.

RAID level 0 uses data striping, has no redundant data, and hence has the best write performance since updates do not have to be duplicated. It splits data evenly across two or more disks. However, its read performance is not as good as RAID level 1, which uses mirrored disks. In the latter, performance improvement is possible by scheduling a read request to the disk with shortest expected seek and rotational delay. RAID level 2 uses memory-style redundancy by using Hamming codes, which contain parity bits for distinct overlapping subsets of components. Thus, in one particular version of this level, three redundant disks suffice for four original disks, whereas with mirroring—as in level 1—four would be required. Level 2 includes both error detection and correction, although detection is generally not required because broken disks identify themselves.

RAID level 3 uses a single parity disk relying on the disk controller to figure out which disk has failed. Levels 4 and 5 use block-level data striping, with level 5 distributing data and parity information across all disks. Figure 17.14(b) shows an illustration of RAID level 5, where parity is shown with subscript p. If one disk fails, the missing data is calculated based on the parity available from the remaining disks. Finally, RAID level 6 applies the so-called P + Q redundancy scheme using Reed-Soloman codes to protect against up to two disk failures by using just two redundant disks. 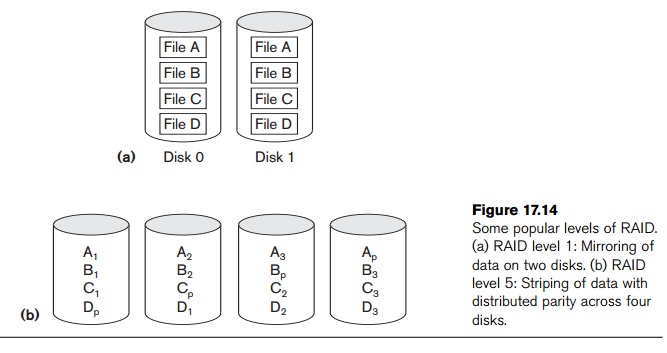 Rebuilding in case of disk failure is easiest for RAID level 1. Other levels require the reconstruction of a failed disk by reading multiple disks. Level 1 is used for critical applications such as storing logs of transactions. Levels 3 and 5 are preferred for large volume storage, with level 3 providing higher transfer rates. Most popular use of RAID technology currently uses level 0 (with striping), level 1 (with mirroring), and level 5 with an extra drive for parity. A combination of multiple RAID levels are also used – for example, 0+1 combines striping and mirroring using a minimum of four disks. Other nonstandard RAID levels include: RAID 1.5, RAID 7, RAID-DP, RAID S or Parity RAID, Matrix RAID, RAID-K, RAID-Z, RAIDn, Linux MD RAID 10, IBM ServeRAID 1E, and unRAID. A discussion of these nonstandard levels is beyond the scope of this book. Designers of a RAID setup for a given application mix have to confront many design decisions such as the level of RAID, the number of disks, the choice of parity schemes, and grouping of disks for block-level striping. Detailed performance studies on small reads and writes (referring to I/O requests for one striping unit) and large reads and writes (referring to I/O requests for one stripe unit from each disk in an error-correction group) have been performed.