Hashing for disk files is called external hashing. To suit the characteristics of disk storage, the target address space is made of buckets, each of which holds multiple records.

Hashing for disk files is called external hashing. To suit the characteristics of disk storage, the target address space is made of buckets, each of which holds multiple records. A bucket is either one disk block or a cluster of contiguous disk blocks. The hashing function maps a key into a relative bucket number, rather than assigning an absolute block address to the bucket. A table maintained in the file header converts the bucket number into the corresponding disk block address, as illustrated in Figure 17.9.

The collision problem is less severe with buckets, because as many records as will fit in a bucket can hash to the same bucket without causing problems. However, we must make provisions for the case where a bucket is filled to capacity and a new record being inserted hashes to that bucket. We can use a variation of chaining in which a pointer is maintained in each bucket to a linked list of overflow records for the bucket, as shown in Figure 17.10. The pointers in the linked list should be record pointers, which include both a block address and a relative record position within the block.

Hashing provides the fastest possible access for retrieving an arbitrary record given the value of its hash field. Although most good hash functions do not maintain records in order of hash field values, some functions—called order preserving— do. A simple example of an order preserving hash function is to take the leftmost three digits of an invoice number field that yields a bucket address as the hash address and keep the records sorted by invoice number within each bucket. Another

example is to use an integer hash key directly as an index to a relative file, if the hash key values fill up a particular interval; for example, if employee numbers in a company are assigned as 1, 2, 3, ... up to the total number of employees, we can use the identity hash function that maintains order. Unfortunately, this only works if keys are generated in order by some application.

The hashing scheme described so far is called static hashing because a fixed number of buckets M is allocated. This can be a serious drawback for dynamic files. Suppose that we allocate M buckets for the address space and let m be the maximum number of records that can fit in one bucket; then at most (m * M) records will fit in the allocated space. If the number of records turns out to be substantially fewer than (m * M), we are left with a lot of unused space. On the other hand, if the number of records increases to substantially more than (m * M), numerous collisions will result and retrieval will be slowed down because of the long lists of overflow records. In either case, we may have to change the number of blocks M allocated and then use a new hashing function (based on the new value of M) to redistribute the records. These reorganizations can be quite time-consuming for large files. Newer dynamic file organizations based on hashing allow the number of buckets to vary dynamically with only localized reorganization (see Section 17.8.3).

When using external hashing, searching for a record given a value of some field other than the hash field is as expensive as in the case of an unordered file. Record deletion can be implemented by removing the record from its bucket. If the bucket has an overflow chain, we can move one of the overflow records into the bucket to replace the deleted record. If the record to be deleted is already in overflow, we sim-ply remove it from the linked list. Notice that removing an overflow record implies that we should keep track of empty positions in overflow. This is done easily by maintaining a linked list of unused overflow locations. 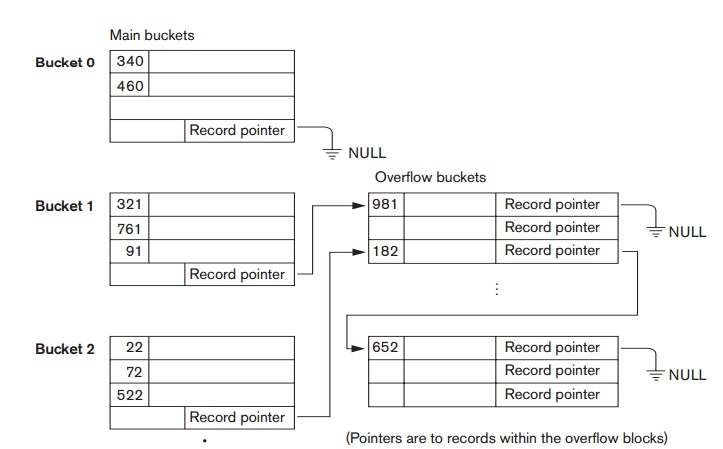 Modifying a specific record’s field value depends on two factors: the search condition to locate that specific record and the field to be modified. If the search condition is an equality comparison on the hash field, we can locate the record efficiently by using the hashing function; otherwise, we must do a linear search. A nonhash field can be modified by changing the record and rewriting it in the same bucket. Modifying the hash field means that the record can move to another bucket, which requires deletion of the old record followed by insertion of the modified record.