Packaging the DNA and Formation of the cos Ends

Up to this point, we have not considered the system that converts circular lambda DNA, which is found in cells, into the sticky-ended linear molecules that are found in phage particles.

Packaging the DNA and Formation of the cos Ends

Up to this point, we have not considered the system that converts circular lambda DNA, which is found in cells, into the sticky-ended linear molecules that are found in phage particles. The termini-produc-ing protein, the A gene product, generates the required staggered nicks while packaging the DNA. The generation of these nicks can easily be assayed by using a double lysogen in which both prophage are Int- or Xis-. Normal phage excision is not possible from such a double lysogen, but the ter system can clip an intact lambda genome out of the middle of the two excision-defective lambda genomes (Fig. 21.17).

Figure 21.17 Cutting a mature full-length lambda out of a tandem doublelysogen in which each individual phage is excision-defective.

In experiments designed to study the effects on lambda of duplicating portions of its DNA, a gratuitous duplication of the cohesive end occurred. A study of this mutant has yielded appreciable insight into the packaging of phage DNA. The starting phage for generation of the duplications was lambda deleted of a sizable fraction of the b2 region of the phage and containing an amber mutation in the red gene. These were grown, and selection was made for phage containing duplications by selecting denser phage after separation according to density on equilibrium centrifugation in CsCl. As expected, most of the resulting dense phage contained duplications as shown by the following criteria: 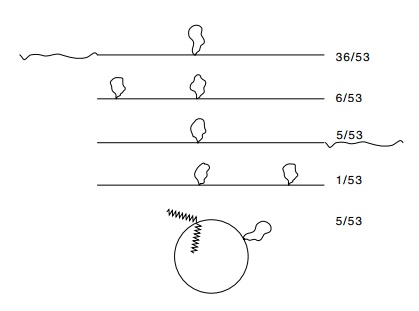 heteroduplexes between strands from these phage and strands from wild-type phage contained a bubble; the phage were denser than the parental-type; and, upon growth in Rec+ cells or in Su+ cells to suppress the red mutation, unequal crossing over around the duplication yielded both triplications and phage lacking the duplication altogether.

A number of types of heteroduplexes were found (Fig. 21.18). Two important conclusions can be drawn from these experiments: the phage contains a duplicated cos site, but both cos sites need not be cleaved for the DNA to be packaged, and packaging of the DNA proceeds from left to right.

The finding of a polarized left-to-right packaging of the lambda DNA is consistent with the in vitro packaging experiments investigating the nature of the DNA required for packaging. These packaging experiments found that a molecule containing only a single genome’s equivalent of lambda DNA, a monomer, was not capable of being packaged. Only polymers of the lambda genome were capable of being packaged. Invivo, the necessary polymers could derive from the rolling circle modeof DNA replication or from recombination between circular molecules. The obvious experiments were designed to discover the minimum DNA capable of being packaged. The minimum is a lambda monomer con-taining a sticky left end and a right cos end covalently joined to a left cos end. These results all strongly suggest that the left end of lambda ispackaged first and the right end enters last. Since the tail is put on after packaging of the DNA, it is natural to expect that the right end of lambda would be contained either within the tail or just at the union of the tail to the head; indeed, when tailless lambda phage that contain lambda DNA are isolated and are lightly treated with DNAse, it is the right end of the DNA that is attacked. All of this strongly suggests that upon infection, the right end of lambda should be injected first into the cells.