Experiments with in vitro Ribosome Assembly

Sophisticated experiments on ribosome structure and assembly became possible with the ability to isolate individual ribosomal proteins and to reconstitute ribosomes from them.

Experiments with in vitro Ribosome Assembly

Sophisticated experiments on ribosome structure and assembly became possible with the ability to isolate individual ribosomal proteins and to reconstitute ribosomes from them. For example, the concentration of each protein could be varied in the reconstitution experiments. This allowed determination of the kinetic order of the reaction, that is, the number of components that had to interact simultaneously for the reaction to proceed. It is certainly to be expected that the assembly process would be sequential, with proteins being added one after an-other; the alternative case—all 21 of the 30S ribosomal subunit proteins and the rRNA coming together simultaneously in a reaction involving 22 components—would have far too low an assembly rate. Indeed, the probability that even a few of the components come together at once is low. Quite surprisingly, however, the most rate-limiting step in ribo-some assembly is not the coming together of even two components; it is the intramolecular rearrangement of a structure already formed (Fig. 21.5). That is, the rate-limiting reaction is unimolecular, and its rate relative to the amount of components present cannot be speeded by increasing the concentration of any components. Such a unimolecular step is analogous to the isomerization of RNA polymerase to form an open complex at a promoter.

Figure 21.5 Assembly of 30S subunits. A subset of 30S proteins and 16S rRNAform an RI complex that then must be activated by heat to form RI✵, to which the remainder of the ribosomal proteins bind to form the complete 30S subunit.

The rate of in vitro ribosome assembly is strongly temperature-de-pendent. From this dependence, the activation energy can be calculated to have the unusually high value of 38 Kcal/mole and is indicative of extensive structural rearrangements. This high value also suggested that in vivo ribosome formation also requires high energy. If so, the activa -tion energy might be increased in some ribosome mutants. This has been found. A sizable fraction of cold-sensitive mutants in E. coli are defective in ribosome assembly. At low temperatures, such mutants accumulate precursors of ribosomes that contain some, but not all, of the ribosomal proteins. Raising the temperature allows these precursors to mature. 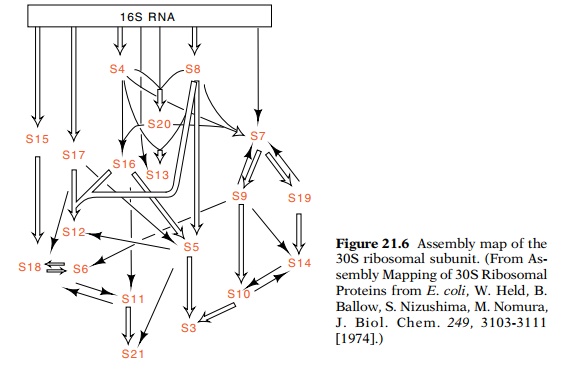 Reconstitution of ribosomal subunits from cold-sensitive mutants permitted pinpointing the target of the mutations. They were in the ribosomal proteins. A similar approach can also be used to locate the altered component in other types of ribosome mutations. For example, the protein that is altered in streptomycin-resistant mutants is a protein designated S21. The ribosomal proteins are designated by S for proteins of the smaller, 30S subunit and L for proteins of the larger, 50S subunit. They are numbered in the order of their locations on a two-dimensional gel in which they all are separated from one another.

The order that individual ribosomal proteins bind to the maturing ribosome can also be determined by in vitro assembly experiments (Fig. 21.6). The binding of the isolated radioactive ribosomal proteins to rRNA can be measured by sedimentation of the RNA after incubation. Only a subset of the 30S proteins are capable of binding to the naked 16S rRNA. The complexes thus formed can then be used to determine which proteins can bind next. Building in this fashion, a complete assembly map of the ribosomal subunits has been constructed. In general it shows that any of several proteins can bind to the structure at any stage in its assembly. Also, a few of the proteins that interact strongly during assembly are encoded by genes in the same ribosomal protein operon (Fig. 21.7).