The topic of in vivo assembly or in vitro reassembly cannot be studied without some knowledge of the structure being assembled.

The Global Structure of Ribosomes

The topic of in vivo assembly or in vitro reassembly cannot be studied without some knowledge of the structure being assembled. Learning the structure of ribosomes has been a tantalizing problem. Most of the interesting details of ribosomes are too small to be seen by electron microscopy, but ribosomes are too large for application of the conven-tional physical techniques such as nuclear magnetic resonance or other spectroscopic methods. Although crystals of ribosomes have been formed for X-ray crystallography, it will be a very long time until these yield detailed structural information.

One of the first questions to resolve about ribosome structure is the folding of rRNA. It could be locally folded, which means that all nucleotides near each other in the primary sequence are near each other in the tertiary structure (Fig. 21.1), or it could be nonlocally folded. Recall that many proteins, IgG for instance, are locally folded and contain localized domains, each consisting of a group of amino acids contiguous in the primary sequence. Ribosomal RNA possesses a se-quence that permits extensive folding, most of which is local but a part of which is nonlocal. Many stretches of the RNA can form double-helical hairpins. The remainder is single-stranded in the form of small or medium sized regions separating double-stranded regions of comple-mentary sequences (Fig. 21.2). Several lines of evidence support the secondary structure which is predicted primarily on the basis of se-quence. One of the most compelling is interspecies or phylogenetic sequence comparisons. Frequently, a stretch A1, which is postulated to base pair with stretch B1, is altered between species. In such a case, the sequences of A2 and B2 in the second species are both found to be altered 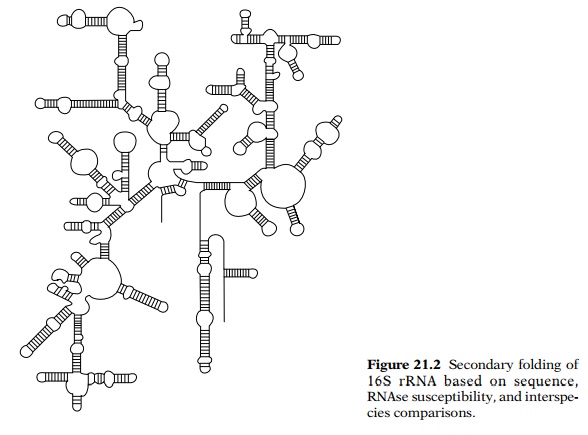 so as to preserve the complementarity. Such compensating sequence changes are a strong sign that the two stretches of nucleotides are base paired in both organisms (Fig. 21.3). Additional evidence supporting the secondary structure predictions is the locations of sites susceptible to cleavage by RNAses or to crosslinking. The cleavage sites of RNAse A lie in loops or in unpaired regions. Crosslinking portions of the rRNA with psoralen, a chemical which will intercalate into helical DNA or RNA and covalently link to nucleotides in the presence of UV light, joins regions postulated to be paired and also connects nucleotides that are in close proximity because of the tertiary structure of the ribosome.

One of the most obvious methods for obtaining structure information on ribosomes is to look at them in the electron microscope. Due to its small size, a ribosomal subunit looks like an indistinct blob. One can,

Figure 21.3 How base differencesin two regions of RNA strengthen proposals for base pairing between the regions involved. 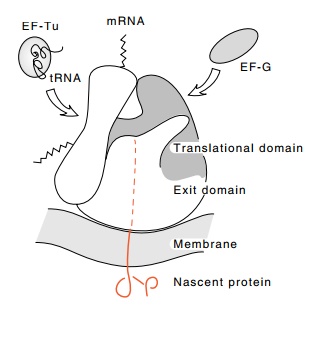 Figure 21.4 Diagrammatic repre-sentation of the exit and translational domains of the ribo-some and their orientations with respect to the membrane binding site. The nascent protein is shown as an unfolded, extended chain during its passage through the ri-bosome. (Adapted from Bernabeu and Lake, Proc. Nat. Acad. Sci. USA 79, 3111-3115 [1982].)

however, see several discernible shapes of blob, suggesting that the subunit is not symmetrical and that it binds to the support in only a few discrete orientations, much like a book resting on a table. As a result, it is possible to average a number of images using electronic image processing. It is even possible to subtract the averaged image of a ribosome from the averaged image of a ribosome plus tRNA to reveal the binding location of a tRNA molecule.

Individual ribosomal proteins can also be marked with antibodies and located by microscopy. IgG is bivalent, so it will join two ribosomal subunits. Owing to the asymmetry of the subunits, the position at which the two are linked by the antibody can often be ascertained. Not only can many ribosomal proteins be located, but the exit site of nascent polypeptide chains has been found through the use of antibodies to a nonribosomal protein whose synthesis can be highly induced (Fig. 21.4). Other features located by this method are the 5’ and 3’ ends of the rRNAs, dimethyl A residues, translation factor-binding sites, and tRNAs.