The presence of a coat on phage lambda, and most other virus particles as well, can be broken down into three basic problems.

The presence of a coat on phage lambda, and most other virus particles as well, can be broken down into three basic problems. How is the coat assembled? How is the nucleic acid placed inside the coat? How is the nucleic acid released from the virus particle into the appropriate cell? At present, partial answers are known to these questions, but it is not yet possible even to imagine the shapes of a set of folded proteins that would self-assemble into a structure the size of a phage, encapsidate DNA, and when properly triggered, release the DNA.

Not only is the structure of lambda phage dramatically different from a ribosome, but its assembly process also is notably different. First, as in the case of many larger viruses, one virus-encoded protein is used 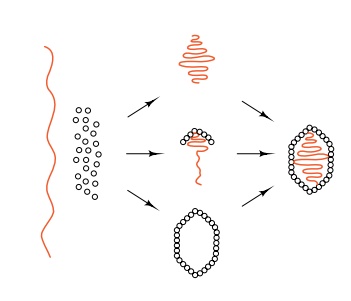 Figure 21.10 Three schemesfor maturation of head subunits and the lambda DNA molecule into an assembled head with the DNA inside.

during assembly but is not present in the final particle. Second, a host protein participates enzymatically in the assembly process. Third, a number of proteins are cleaved or covalently joined during assembly.