A virus coat could be constructed like a regular polyhedron. For example, 24 identical subunits could form a cube with one subunit at each corner of each face.

The Geometry of Capsids

Previously, we saw that lambda’s genes are crowded together and even overlapping in places. Other bacterial virus genomes are similarly squeezed, and it is likely that survival of many types of viruses depends on their packing as much information as possible into as short a genome as possible. This being the case, it is likely that as few genes as possible will be used to code for DNA encapsidation. What general principles might then apply to the structure of such viruses?

A virus coat could be constructed like a regular polyhedron. For example, 24 identical subunits could form a cube with one subunit at each corner of each face (Fig. 21.11). 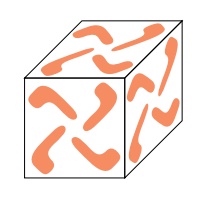 Figure 21.11 A cube withsubunits at each vertex.

Note that each of the 24 subunits would make identical contacts with its neighbors. The maximum vol-ume that could be enclosed by a set of subunits, each making identical contact with its neighbors, is based on the 20-sided icosahedron (Fig. 21.12). Each face could consist of three subunits. Thus the maximum number of subunits that can be utilized to enclose a volume in which each subunit is exactly equivalent to any other is 60. Experimentally, however, many viruses, lambda included, are found to be approximately icosahedral but to possess more than 60 subunits in their coats. 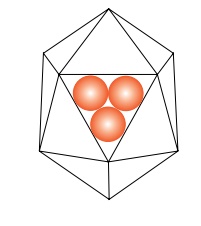 Caspar and Klug have investigated the structures that can be con-structed when the constraint that each subunit be exactly equivalent to any other is weakened to permit them to be only quasi-equivalent. That is, each subunit will have nearly the same shape, but will still make homologous contacts with its neighbors. Using the same contact points over and over necessitates that the final structure be symmetrical. Maximizing the similarity of contacts with neighbors necessitates that the structure be helical or a variation on an icosahedron. We shall consider only those based on icosahedra.

The restriction to icosahedral symmetry can be most easily under-stood by considering why some other symmetry is less favored. For example, why is a large cubic structure unlikely? Suppose a large planar network of subunits is to be converted to a cube. One of the eight vertices of a cube can be generated by converting a point of fourfold symmetry to a point of threefold symmetry by removing a semi-infinite quadrant of subunits (Fig. 21.13). Repeating this process at the other seven vertices generates the cube. In such a structure there are three kinds of subunit interactions; between subunits on the same face, between subunits across an edge, and between subunits at a vertex. When the cube contains 24 subunits, each subunit engages in each of these three types of interactions and is equivalent to any other subunit. When the cube possesses more subunits, however, not all subunits engage in these three types of interactions, and the different subunits are non-equivalent and therefore distorted with respect to one another.

Figure 21.13 Conversion of a planar net of subunits to a cube by removing asector of the plane and bringing the edges together.

vertices are adjacent to one another, a regular icosahedron is generated. If the fivefold vertices are not adjacent, and a larger volume is enclosed, then again three types of interactions are possible, but the differences amongst them are smaller, and hence the required distortions are smaller than in the cubic case. Hence, nature frequently will choose to construct virus coats based on the five and six neighbor structure. Often the units possessing the fivefold or sixfold symmetry can be isolated intact or observed as a unit in the electron microscope. These cap-someric polymers are called pentons and hexons.

One way to view some, but not all, of the higher-order structures is that they subdivide the equilateral triangles of the regular icosahedron. The triangles can be subdivided into 4, 9, 16, 25, and so on, subtriangles. Other icosahedra, however, are also possible. Consider a plane net of equilateral triangles and unit vectors a and b (Fig. 21.14). Satisfactory icosahedra can be constructed if one of the fivefold vertices is placed at an origin and the second at position (na, mb), where n and m are integers. If we define T = (n2 + nm + m2), then the regular icosahedron has T = 1 since n = 1 and m = 0. The number of subunits, S, in all the

Figure 21.14 Coordinates for locating vertices of an icosahedron with quasi-equivalent subunits. X is one vertex and Y the second, which is located 2 units in the a direction and 1 unit in the b direction.

icosahedra is S = 60T. Although the coat of lambda phage is based on a T = 7 icosahedron, it uses two types of coat protein. The two bear a fixed spatial relationship to one another as though they derived from a single

polypeptide chain with a segment removed. In addition to these proteins, smaller numbers of other proteins are found in the head. Some of these form the connection between the head and the tail.