At about 15 and 30 kilometers from the ground level, the earthâ€™s atmosphere has a thin layer of ozone, which absorbs ultraviolet sunlight. Ozone is found in the layer of the atmosphere called the Stratosphere. It acts as a protective covering that absorbs ultraviolet (UV) radiation from the sun. The ozone molecule (O3) consists of three oxygen atoms. It is formed when atmospheric oxygen (O2) on exposure to solar radiation breaks into two oxygen atoms; each atom then joins up with a single oxygen atom. The ozone molecule is unstable. It soon decays again to form molecular oxygen. This cycle is a continuous process in the upper reaches of the stratosphere.

September 16 has been designated by the United Nations as the International Day for the Preservation of the Ozone Layer.

The ozone layer was discovered in 1913 by the French physicists Charles Fabry and Henri Buisson.

The excessive release of chlorine and bromine from man-made compounds such as chlorofluorocarbons (CFCs) causes ozone layer depletion. CFCs, methyl chloroform, carbon tetrachloride, hydrochlorofluorocarbons, hydrobromofluorocarbons and methylbromide are found to have direct impact on the depletion of the ozone layer. These are categorized as ozone-depleting substances (ODS).

Effects: UV rays may penetrate deep into the skin and can lead to premature skin aging and wrinkling of skin; suppression of the immune system, skin cancer (melanoma) and chronic effects leading to eye damage. DNA damage can result from free radicals and reactive oxygen and photons can damage the DNA itself.

Control: Ozone layer depletion can be controlled by

1. Phase down or ban the use of CFCs (CFC free refrigerants).

2. Minimizing the use of chemicals such as halons and halocarbons.

Ozone hole (in purple colour), is the area above Antarctica, where the ozone layer is the thinnest. 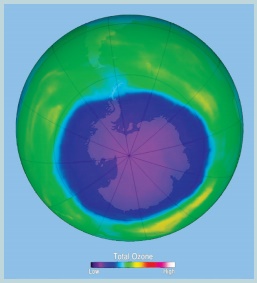 Ozone thickness is given in Dobson unit (see carefully the scale shown in colour from violet to red). The ozone hole over Antarctica develops each year between late August and early October.