Orthogonal metal cutting : Cutting edge of the tool is perpendicular to the direction of tool travel. 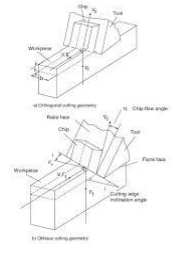 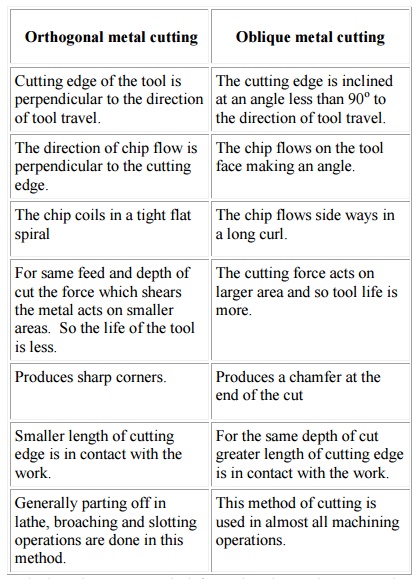 Cutting edge of the tool is perpendicular to the direction of tool travel.

The direction of chip flow is perpendicular to the cutting edge.

The chip coils in a tight flat spiral

For same feed and depth of cut the force which shears the metal acts on smaller areas. So the life of the tool is less.

Smaller length of cutting edge is in contact with the work.

Generally parting off in lathe, broaching and slotting operations are done in this method.

The cutting edge is inclined at an angle less than 90o to the direction of tool travel.

The chip flows on the tool face making an angle.

The chip flows side ways in a long curl.

The cutting force acts on larger area and so tool life is more.

Produces a chamfer at the end of the cut

For the same depth of cut greater length of cutting edge is in contact with the work.

This method of cutting is used in almost all machining operations.

Orthogonal cutting the cutting edge is straight and is set in a position that is perpendicular to the direction of primary motion. This allows us to deal with stresses and strains that act in a plane.

Oblique cutting the cutting edge is set at an angle.

According to the number of active cutting edges engaged in cutting, we distinguish again two types of cutting:

Each machining operation is characterized by cutting conditions, which comprises a set of three elements:

Cutting velocity: The traveling velocity of the tool relative to the work piece. It is measured in m/s or m/min.

Depth of cut: The axial projection of the length of the active cutting tool edge, measured in mm. In orthogonal cutting it is equal to the actual width of cut.

Feed: The relative movement of the tool in order to process the entire surface of the work piece. In orthogonal cutting it is equal to the thickness of cut and is measured in mm.