Natural selection favors animals that forage efficiently, selecting foods and feeding activities that maximize the ratio of benefits to costs.

Natural selection favors animals that forage efficiently, selecting foods and feeding activities that maximize the ratio of benefits to costs (see Hart 1993). Benefits include calories and nutrients ingested, whereas costs involve energy used up, time lost to other activities, or exposure to predators or parasites.

Fishes perform optimally when choosing food types, feeding locales and times, and foraging modes. As might be expected, fishes are most selective when presented with an overabundance of high-quality food and progressively less selective as food becomes less abundant or lower in quality. For Bluegill Sunfish presented water fleas (Daphnia) of different sizes and at differing densities, only the largest, most profitable prey are eaten when prey are abundant, but all prey are depleted equally and completely when prey are scarce. At intermediate prey densities, the largest zooplankters are consumed first, then the intermediate prey, and finally the smallest, least profitable prey (Werner & Hall 1974).

Fishes have also shown an ability to assess the relative profitability of different food patches and to switch among patches as resources are depleted. When South American cichlids, Aequidens curviceps, were presented with two food patches of different profitability, they aggregated in the more profitable patch in direct proportion to the difference in food availability. Fish moved between patches periodically, feeding most where food was most abundant, then switching as food was depleted. Similar results have been obtained in studies of minnows, guppies, and sticklebacks (Godin & Keenleyside 1984; Abrahams 1989). 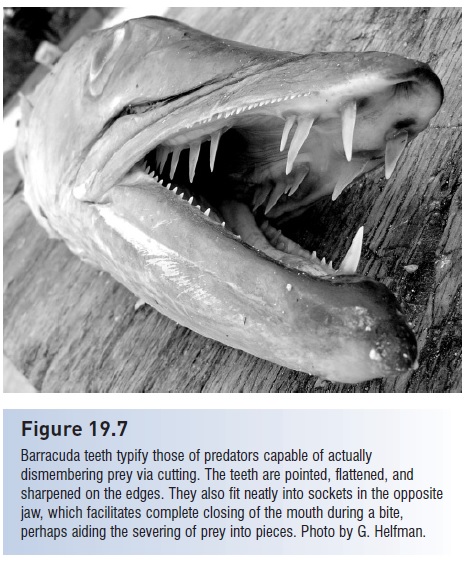 Natural selection should also produce foragers that choose a method of food handling that gives them the greatest relative return for their effort. American Eels employ three modes for handling food. Small pieces of food (<85% of jaw width) can be suctioned into the mouth and swallowed. Larger pieces require dismembering. Large but soft pieces are grasped and shaken until a piece is removed, whereas large, fi rm foods are grasped and spun (see Fig. 19.7). In terms of net energy return and growth rate, suction is the most profitable and spinning the least profitable food type, with shaking falling somewhere between. When offered food types in a two-way choice situation, eels consistently preferred suction food over shake and spin food, and shake food over spin food, again conforming to the expectations of the cost–benefit approach (Helfman & Winkelman 1991; Helfman 1994).