The key to lowering the probability of death during the search phase of predation is to either avoid detection by the predator or to detect the predator first.

The key to lowering the probability of death during the search phase of predation is to either avoid detection by the predator or todetect the predator first. In the former case, some form of camoufl age is used; in the latter case, the all-important element of surprise is eliminated. The same principles govern camoufl age in both predators and prey. The task is often more difficult for prey because, unlike predators that can blend into the background and sit and wait for prey to blunder by, prey fishes must themselves search for food without being detected by predators.

It is obviously advantageous for a fish to not have to flee from a predator. The best way to accomplish this is to avoid detection by the predator in the first place. Fishes avoid detection by visually hunting predators in two chief ways, either by appearing like somethingunfishlike and therefore unrecognizable, or by disappearing entirely. In both categories, deception is accomplished through either reduction of photocontrast with the background or disruption of the outline of the fish. A common form of the first tactic, appearing unfishlike through photocontrast reduction, is called protective resemblance. Here a fish matches its background so accurately that it appears to blend in with it. Resemblance is achieved through constant or variable coloration and epidermal body growths that match surrounding objects. As most predatory animals are highly sensitive to movement, protective resemblance is usually enhanced by immobility.

Many examples among fishes of remarkable resemblances to background structures can be given. Sargassumfi shes (Antennariidae) and Leafy Seadragons (Syngnathidae) hover amongst and mimic seaweed; seahorses and their relatives demonstrate some of the most spectacular examples of protective resemblance (see Fig. 15.7). Clingfishes (Gobiesocidae), shrimpfishes (Centriscidae), and cardinalfishes (Apogonidae) have long black stripes and hover among the spines of sea urchins. Yellow-spotted Gobies (Gobiidae) with greenish bodies match both the green stalks and yellow polyps of the antipatherian sea whips on which they rest. Agonid sea poachers have rugose bodies covered in brown, orange, black, white, and red that match the sponge- and algae-covered bottom on which they are found. Green pipefishes (Syngnathidae) and wrasses (Labridae) live among green-stemmed sea grasses. Flatfishes are masters of camoufl age, changing color and pattern to resemble a variety of bottom types (e.g., Fujimoto et al. 1991). Predatory fishes also employ protective resemblance and relative immobility as they lie in wait on the bottom for prey (or hide from their own predators). These predators include lizardfishes, goosefishes, stonefishes, scorpionfishes, toadfishes, flatheads, and stargazers. 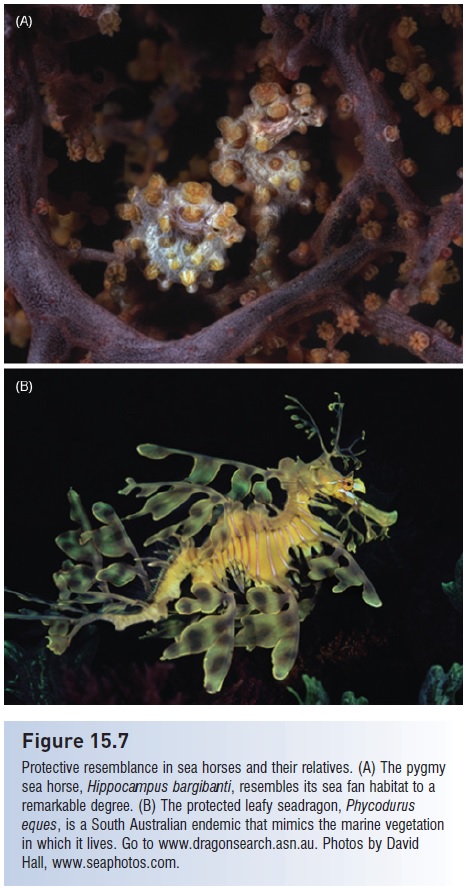 Crypticity in the above examples usually involves blending into the background. An alternative tactic is to be obvious but to appear as an inedible object. This is achieved by mimicking distasteful or otherwise inedible organisms and objects. Juvenile sweetlips (Haemulidae) and batfish (Ephippidae) have the coloration and unfishlike swimming behavior of flatworms and nudibranchs, and juvenile burrfishes (Tetraodontidae) mimic opisthobranch mollusks. The invertebrates that are mimicked possess skin toxins, are brightly colored, behave conspicuously, and are avoided or rejected by most predatory fishes. Several small fishes mimic small floating sticks, blades of grass, or dead leaves, including juvenile needlefishes, halfbeaks, ephippid batfishes, lobotid tripletails, and adult nandid leaffishes (Randall & Randall 1960; Randall & Emery 1971; Moland et al. 2005; Randall 2005). That many of these instances involve juvenile fishes that “grow out” of a mimetic stage is further evidence of an antipredator function; predation pressure is often strongest on young fishes (see  Predation). 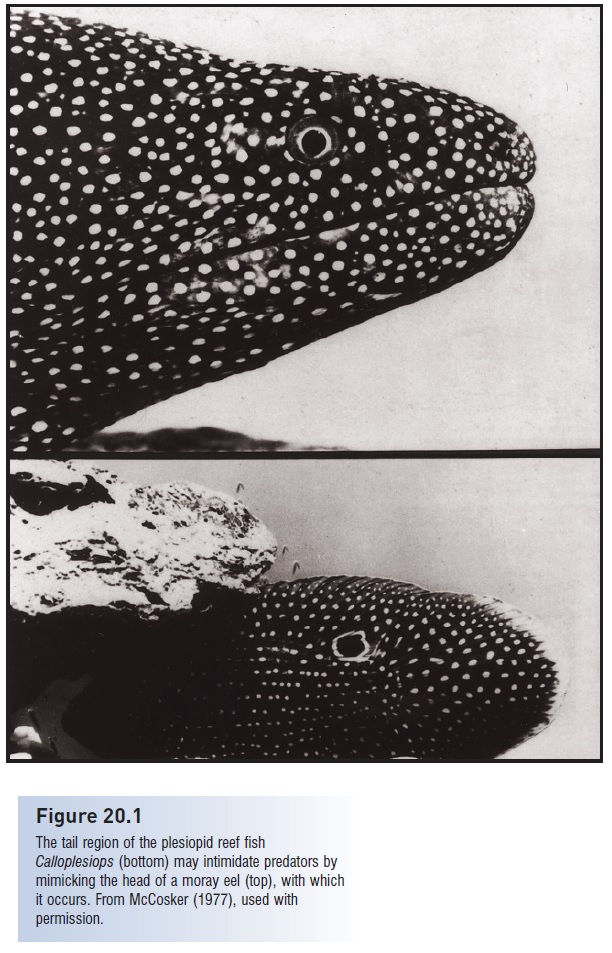 The tail region of the plesiopid reef fish Calloplesiops (bottom) may intimidate predators by mimicking the head of a moray eel (top), with which it occurs. From McCosker (1977), used with permission.

Another means of appearing unfishlike is to be disruptively colored. Vertebrates recognize organisms by their outlines and by the gradual shading differences that exist among regions and features within an outline. A disruptively colored fish has areas of contrasting color, usually black and white, on the body that break up the outline of the fish, making it appear unfishlike. This is one explanation for the bold coloration of some reef fishes such as humbug damselfishes, Rock Beauty Angelfish, and some croakers, as well as the vertical barring and dorsal spots of many shallow water species (sculpins, Black-banded Sunfish, darters, cichlid angelfishes, jacks, barracudas, tunas) that will be viewed by the flickering light of vegetated areas or created by wavelets passing overhead (McFarland & Loew 1983) (Fig. 20.2A). Even strikingly colored reef fishes, along with their less colorful, shallow water counterparts on reefs and in temperate lakes and kelp beds, assume a dark and light, blotchy coloration when resting at night. This disruptive pattern presumably breaks up their outlines and makes them more difficult to discern at low light levels. Disruptive coloration is also a reasonable explanation for the common occurrence of split-head coloration in many lurking predators (Fig. 20.2B) (see  Pursuit).

Examples and functions of disruptive coloration in fishes. (A) The Jacknife Fish, Eques lanceolatus, may use boldly contrasting, dark and light regions to emphasize those parts of its outline that are not fishlike in appearance, thus momentarily confusing a potential predator. (B) Many lurking predators possess a dark or light interorbital stripe that could disrupt their head outline when viewed head-on, making recognition by prey momentarily difficult. This large (c. 45 cm) Japanese Snook (probably Lates japonicus) has a distinctive, light colored interorbital stripe. (A) from Cott (1957), used with permission; (B) photo by J. DeVivo.