Once a predator finds and recognizes prey, pursuit is likely.

Once a predator finds and recognizes prey, pursuit is likely. Antipursuit tactics involve discouraging the predator due to real or feigned unpalatability, shelter seeking, outdistancing or outmaneuvering the predator, or disappearing into the background.

Some fishes possess stout, sharp, sometimes poisonladen spines that can be used in defense against predators. Others possess toxic chemicals in their skin and internal organs. “Noxious” prey typically advertize their unpalatability with coloration and movement that make them and their defenses quite evident. Such aposematic (“warning”) coloration or behavior is typical of animals that are dangerous or inedible (e.g., many bees, wasps, caterpillars, butterfl y ies, bufonid toads, porcupines, skunks). Deliberate, slow movements aid learning of the warning signal without eliciting attack from predators that are otherwise conditioned to pursue rapidly fleeing prey. By advertizing their inedibility, prey short-circuit the predation cycle at an early phase, saving the energetic costs of flight and the possible injury costs of being handled; predators in turn save time and energy and avoid potential injury or possible death.

Many fishes with obvious defenses have bold or bright coloration that could provide a warning to predators. The scalpel-like enlarged scales in the caudal peduncle of surgeonfishes (Acanthuridae) may be surrounded by a bright yellow or orange patch. Lionfish (Pteroidae) have contrasting red, black, and white fins and a stately posture that accentuates their poisonous fin spines. Weeverfishes (Trachinidae) erect their dark-colored, highly venomous dorsal fins when disturbed. Many pufferfishes (Tetraodontidae, and other tetraodontiforms), including the famous fugu puffers served in exclusive Japanese restaurants, contain powerful tetradotoxins in their skin, liver, and gonads. These fishes have contrasting rather than countershaded body markings and move about in exposed locations during the day. Some plotosid marine catfishes with exceedingly powerful spine venoms have contrasting dark and light coloration and shoal conspicuously during the day, a very uncatfishlike activity time.

Many zooplanktivores take shelter in bottom structure when pursued by predators. Hence, anthiine serranids, fusiliers (Lutjanidae), butterfl yfishes (Chaetodontidae),damselfishes (Pomacentridae), wrasses (Labridae), and surgeonfishes (Acanthuridae) will dive toward the coral when disturbed. Morphology and behavior correlate strongly with vulnerability among these fishes. Small species and small members of large species feed closer to the bottom to compensate for their slower swimming speeds. Species that forage farther from the bottom tend to have more fusiform bodies and more deeply forked tails, both characteristics of faster swimming fishes (Fig. 20.7). Many fishes are permanently associated with holes, cracks, or tubes in the bottom to which they retreat when threatened (e.g., garden eels, Congridae; jawfishes, Opisthognathidae; tilefishes, Malacanthidae; tubeblennies, Chaenopsidae; hover gobies, Gobiidae). A few, such as the razorfishes (Hemipteronotus, Labridae), dive into sand with incredible speed. Fishes associated with macrophyte beds in lakes and on reefs typically use the vegetation as shelter when pursued (e.g., centrarchid sunfishes, cichlids, rabbitfishes, kelpfishes). Evading a pursuing predator in open water requires superior speed or maneuverability. The odds here favor the predator, since predators are of necessity larger than their prey and larger fishes can usually swim faster. Some empirical studies show that prey accelerate faster than predators, perhaps because escape often involves relatively quicker C-start maneuvers whereas a predatory attack utilizes Sstart activities (Dominici & Blake 1997). Also, small size enhances maneuverability and permits tactics unavailable to large predators.

To outdistance a predator, small pelagic prey can take advantage of the drag reduction that can be gained by becoming airborne, a tactic used most effectively by the exocoetid flyingfishes (Davenport 1994). Flyingfishes commonly double their speed after emerging into the air, accelerating from about 36 km/h in water to as much as 72 km/h while airborne. They typically take off into the wind and travel for 30 s and as far as 400 m in a series of up to 12 flights. Multiple flights are interspersed with periods of rapid taxiing when only the beating, elongate lower lobe of the tail fin contacts the water surface. Fish may reach an altitude of 8 m. Refraction at the water surface makes them undetectable by predators except when a calm sea and bright sun create a visible shadow. Hence the flyingfish’s re-entry point would be largely unpredictable, particularly if it followed a curving flight path. 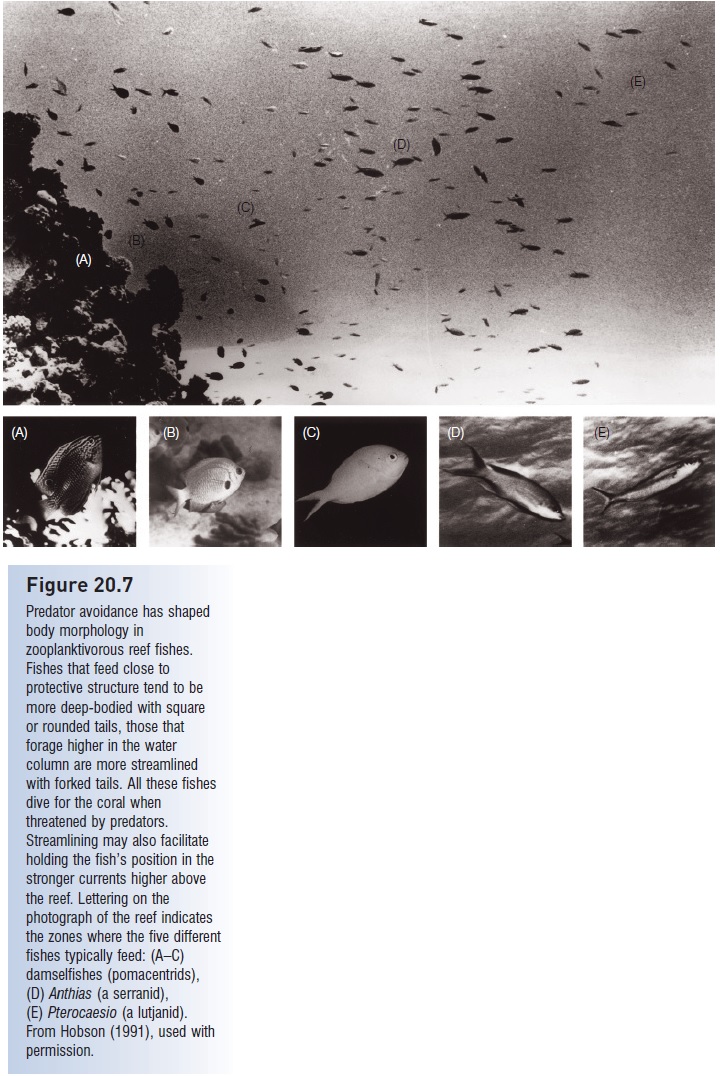 Predator avoidance has shaped body morphology in zooplanktivorous reef fishes. Fishes that feed close to protective structure tend to be more deep-bodied with square or rounded tails, those that forage higher in the water column are more streamlined with forked tails. All these fishes dive for the coral when threatened by predators. Streamlining may also facilitate holding the fish’s position in the stronger currents higher above the reef. Lettering on the photograph of the reef indicates the zones where the five different fishes typically feed: (A–C) damselfishes (pomacentrids), (D) Anthias (a serranid), (E)Pterocaesio (a lutjanid). From Hobson (1991), used with permission.

Flyingfishes glide rather than fly, gliding effi ciency depending largely on wing surface area divided by body mass. Flyingfishes come in two-winged varieties with enlarged, cambered (curved) pectoral fins and four-winged varieties that also have enlarged pelvic fins. These fishes are of necessity small, never exceeding 50 cm in length. A 100 g flying fish has a total pectoral fin surface area of about 200 cm2. For a 100 kg tuna to have proportionally large lifting surfaces, its pectoral fins would each have to be about 100,000 cm2 in area.

Other “flying” fishes include the African freshwater Butterfl yfish, Pantodon (Osteoglossidae), and the South American freshwater hatchetfishes (Gasteropelecidae), the latter species generating flying forces by vibrating its pectoral fins via pectoral muscles that may account for 25% of its body weight. The greatly enlarged pectoral fins of adult dactylopterid flying gurnards are expanded during cruising over the bottom; these fish have never been observed airborne. Many fishes leap into the air when escaping predators, including minnows (Cyprinidae), halfbeaks (Hemiramphidae), needlefishes (Belonidae), sauries (Scomberesocidae), cyprinodontids, atherinids, Bluefish (Pomatomidae), mullets (Mugillidae), and tunas and mackerels (Scombridae). And some predators (dolphinfishes, mackerels, tunas, billfishes) leap into the air in horizontal pursuit of prey, but how these leaps are timed and aimed remains unstudied. Flyingfishes do have one advantage over airborne predators: a flyingfish’s cornea is flattened, which gives it the ability to focus both in water and air. Other fishes have a curved cornea, which only allows focusing in water. A remarkable convergence on the “flyingfish morphology” occurred among at least one chondrostean in the Triassic. The perleidiform, Thoracopterus, possessed expanded pectoral and pelvicfins, a longer lower caudal lobe, and other traits suggesting that it too glided out of the water (see Fig. 11.21).