Predator–prey interactions often occur over a period of tens of milliseconds. With such rapid reaction times, predators generally require an element of surprise to be successful.

Predator–prey interactions often occur over a period of tens of milliseconds. With such rapid reaction times, predators generally require an element of surprise to be successful. The element of surprise can be eliminated if prey detect the predator before the predator detects the prey, or at least if the predator is seen before it gets within striking distance. Early detection can be achieved through the collective vigilance of a shoal: fish in shoals detect an approaching predator more quickly than do solitary fish (Magurran et al. 1985; Milinski 1993).

Many shoals, as well as solitary fish, gain a relative visual advantage over approaching predators by hovering under structure such as floating logs or vegetation, undercut banks or coral ledges, or overhanging trees or artifi cial structures such as docks and bridges. Under appropriate conditions, a shaded fish can see an approaching fish in sunlight as much as twice as far away as the sunlit fish can see the shaded fish (Fig. 20.6). This phenomenon can be easily experienced by a diver approaching a ledge or dock; objects in the shadow of the ledge are difficult to discern until the observer swims into the shade of the object. The implications for predators lurking or prey hiding in shade are obvious; a predator approaching a shaded prey fish will lose all of the advantages of surprise because the predator will be spotted long before it can see the prey. Prey careless enough to pass near shaded structure are likely to be captured by predators lurking undetected within the darkened region. 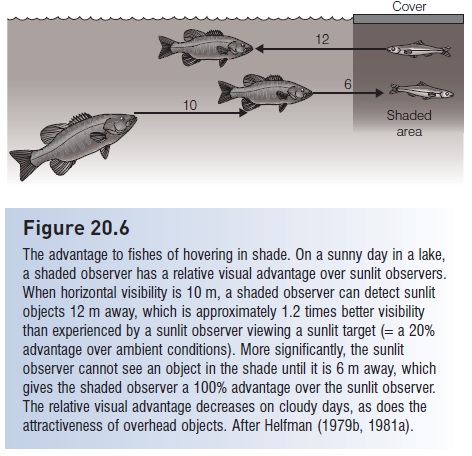 The visual advantages and disadvantages around shade arise as a result of physical and physiological phenomena associated with the way in which the vertebrate eye responds to stimuli of different strengths. Vertebrate sensors adapt rapidly to the strongest background stimulus present. Sensitivity of the eye to light is determined by the brightest features of the environment: the eye becomes relatively incapable of seeing dimly lit objects against a bright background. An observer in a darkened room is hidden from the view of people in sunlight outside the room, but the sunlit people are easily seen by the shaded voyeur. In water, this effect is heightened by turbidity. As light enters water, it reflects off particles such as phytoplankton and silt. When looking horizontally underwater on a sunny day, particles are particularly obvious as bright blotches. Particles closest to the observer’s eyes are the brightest because the light reflected off them travels the shortest distance. Turbidity therefore creates a bright region adjacent to the observer, a veil of brightness that intervenes between the eye and more distant targets (Lythgoe 1979). The eye quickly adapts to this bright region, and objects farther away in the darker background of space light become more difficult to detect.

The eye’s adaptation to bright background plus veiling brightness combine to explain the relative visual advantage of a fish in shade. The shaded fish’s eye is adapted to low illumination levels and hence can see objects in the shade as well as more brightly lit objects outside the shade. Veiling brightness is reduced because the overhead object shades out the sunlight closest to the eye, which eliminates the strongest component of the veil. Observers in the sunlight have their view obscured by reflecting particles and must see with an eye which has been desensitized to dim light because of the surrounding bright conditions.