Optimal group size is complicated because antipredator functions probably favor larger optima than do feeding groups. If dominance hierarchies exist, dominant individuals, with their preferential access to resources, may have a larger optimum than would subordinate members. Subordinate animals must decide between sustaining the costs of a large group versus being alone. 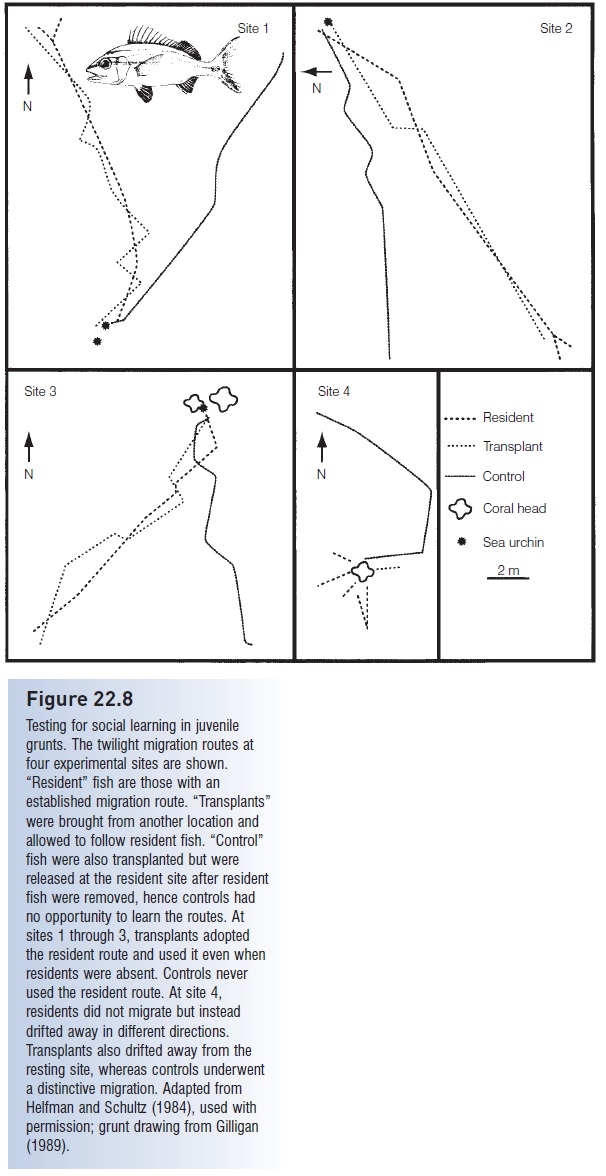 Testing for social learning in juvenile grunts. The twilight migration routes at four experimental sites are shown. “Resident” fish are those with an established migration route. “Transplants” were brought from another location and allowed to follow resident fish. “Control” fish were also transplanted but were released at the resident site after resident fish were removed, hence controls had no opportunity to learn the routes. At sites 1 through 3, transplants adopted the resident route and used it even when residents were absent. Controls never used the resident route. At site 4, residents did not migrate but instead drifted away in different directions.

Transplants also drifted away from the resting site, whereas controls underwent a distinctive migration. Adapted from Helfman and Schultz (1984), used with permission; grunt drawing from Gilligan (1989).

The conflicting needs of group members may make attainment of an optimum impossible. Minimal group size should be easier to determine than maximal size. Prey should avoid being alone or joining very small groups. When Fathead Minnows were allowed to choose between shoals of different sizes, they consistently chose the larger of the two shoals, particularly when one shoal was relatively small (less than eight fish) and a predator was present. Zebra Danio, Danio rerio, females also consistently chose a larger shoal, although male Danios showed no such preference. Banded Killifish, Fundulus diaphanous, chose larger shoals when under predatory threat but smaller shoals when feeding cues were present.These findings indicate that fishes alter their decisions with respect to shoal size in response to changes in the social and ecological context of shoaling (Hager & Helfman 1991; Hoare et al. 2004; Ruhl & McRobert 2005).