Territoriality implies a defended space, either the personal space around an individual (=individual distance) or a bounded area around some resource.

Territoriality implies a defended space, either the personal space around an individual (=individual distance) or a bounded area around some resource (e.g., Grant 1997). A territory may encompass several resources, as in male pomacentrid damselfishes in which the territory provides food (algae), a spawning site and the eggs spawned there, and refuge holes from predators where the territory holder also rests at night. Territories are often subunits of the larger home range occupied by an individual (see next section). 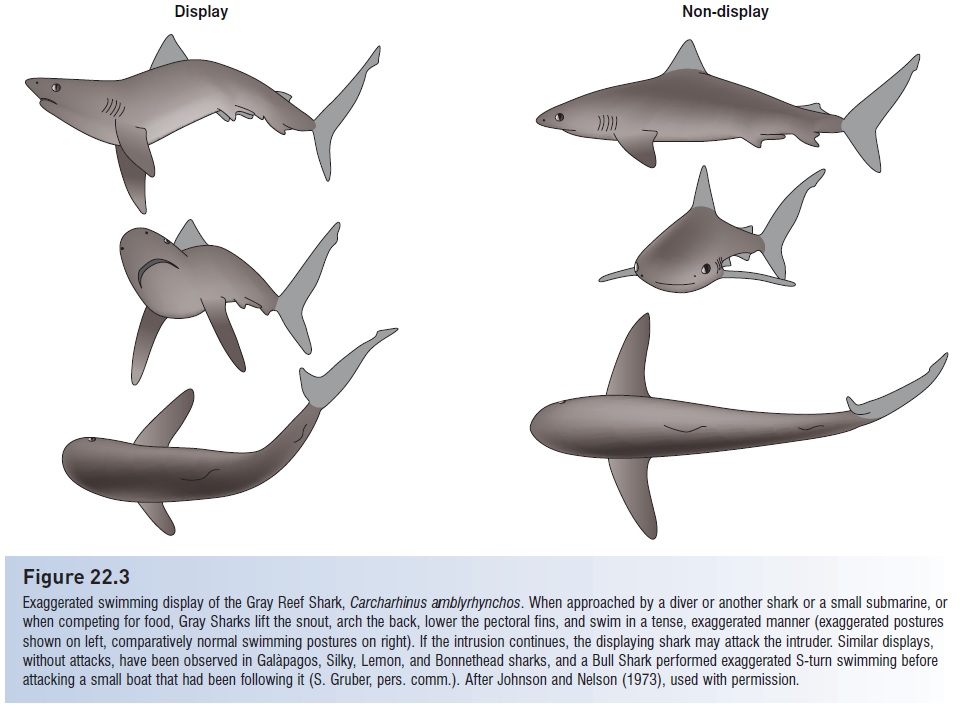 Territoriality is often flexible. Territorial boundaries and intensity of defense can vary as a function of the relative impacts of different intruders. Herbivorous damselfishes defend a larger space against large competitors such as parrotfishes and surgeonfishes than against small damselfishes; damselfishes also tolerate large competitors for shorter times inside the territory, attacking them more aggressively. The strongest attacks are directed at potential egg predators, which have the greatest relative impact on the reproductive success of the damselfish. Juvenile Coho Salmon also defend a larger territory against larger conspecific intruders. Butterfl yfishes chase species with which they overlap in diet but tolerate the presence of non-competitors (Myrberg & Thresher 1974; Reese 1975; Ebersole 1977; Dill 1978).

Territoriality may also vary over time at several levels. Juvenile grunts (Haemulidae) form daytime resting shoals over coral heads. Individuals stake out small territories of about 0.04 m2 within the shoal; the territories often contain refuge sites from predators. These territories are defended vigorously with open mouth displays, chases, and biting. In the evening, the shoal becomes a polarized school that moves from the reef to adjacent grassbeds to feed. No agonism is seen during the migratory period, as such behavior would negate the antipredator function of the school when moving across the dangerous reef edge. Once in the grassbeds, the shoals break up and the fish occur as widely spaced, foraging individuals, implying space-enforcing behaviors (McFarland & Hillis 1982). Territoriality changes with age in many species. Young Atlantic Salmon are territorial in streams. As they grow and their food requirements shift to larger prey, they move into deeper water and join foraging groups that have dominance hierarchies rather than territories (Wankowski & Thorpe 1979). In some species, agonistic interactions occur during the breeding season, with fish aggregating peaceably at other times (e.g., codfishes).