Home | | The Diversity of Fishes: Biology Evolution and Ecology | Mutualism and commensalism - Interspecific relations of Fishes: symbioses
Posted On :  07.08.2017 06:14 pm

Some of the best studied mutualistic interactions involve fishes that pick external parasites from other fishes.

Some of the best studied mutualistic interactions involve fishes that pick external parasites from other fishes. Cleaning behavior exists in almost all aquatic environments and involves dozens of shrimp and more than 111 fish species in 29 families (Sulak 1975; DeMartini & Coyer 1981;Lucas & Benkert 1983; Tassell et al. 1994; Côté 2001;Zander & Sotje 2002). As many as 18 different species of nearshore, primarily kelpbed species in California are known to clean other fishes (McCosker 2006). Mutualistic, co-evolved relationships are most obvious on coral reefs (Limbaugh 1961; Feder 1966; Losey 1987; Losey et al. 1999b). Juveniles of a number of wrasse, butterfl yfish, damselfish, and angelfish species clean other fishes, but cleaning specialists occur only among the cleaner wrasses (Labroides) of the Pacific and the neon gobies (Gobiosoma) of the Caribbean (Fig. 22.9). Cleaners are usually territorial, occupying well-defined and often prominent coral heads or other locales referred to as cleaning stations. Communication between host and cleaner is obvious and stereotyped. Host fishes of numerous species approach these stations and pose, frequently assuming head-up or head-down positions while hovering in the water column, blanching in color, spreading their fins, and opening their mouths.

Cleaners approach in a bouncing or tail wagging manner, frequently contacting a host during this dance, and then pick over the host’s body surface, often entering the mouth or gill covers of herbivores and piscivores alike (Grutter 2004).

Parasites, particularly copepods, are removed, as are mucus and pieces of tissue around wounds; parasite loads are rapidly reduced following cleaning bouts (Grutter 1999; Sikkel et al. 2004; Cheney & Côté 2005). Since hosts without parasites or wounds will solicit cleaning, tactile stimulation alone by the cleaner must attract some fishes (Losey 1979; Bshary & Wurth 2001), and hosts that are parasite-free may allow cleaners to pick them over and feed on mucus as a means of maintaining a relationship that is more valuable at other times. A cleaning bout is terminated when the cleaner leaves or the host fish shudders or snaps its mouth closed and open. Cleaning relationships have been exploited by humans, who use the European Corkwing Wrasse, Symphodus melops, among other temperate labrids to help reduce external parasite infestations on Atlantic Salmon kept at extremely high densities in aquaculture pens (Sayer et al. 1996).

Many cleaners have converged on coloration patterns involving bold stripes, and a dark median lateral stripe appears to be important for host fish recognition of the cleaner guild (Stummer et al. 2004; Arnal et al. 2006). Both cleanerfishes and shrimp appear to be largely immune to predation and consequently service such predators as moray eels, seabasses, snappers, and barracuda (Côté 2001). In the Indo-Pacific, at least one wrasse species, Diproctacanthus xanthurus, cleans damselfishes that do not leave their territories and hence cannot take advantage of cleaning stations (Randall & Helfman 1972). Two species of sabretoothed blennies, Aspidontus taeniatus and Plagiotremus rhinorhynchus, mimic the coloration and behavior of Labroides spp. to gain access to posing hosts from which they take pieces of fins and body tissue. The deception is most successful with young hosts.

The importance of cleanerfishes in reef fish dynamics may differ at different locales. The experimental removal of cleaners from a Caribbean reef led to a decrease in host fish density and an increase in parasitic infections, whereas a similar removal in Hawaii led to no such changes (Losey 1978; Gorlick et al. 1987). A more extensive, multireef, 6-month removal experiment on the Great Barrier Reef of Australia also found no detectable effect on total fish abundance or on fish species diversity (Grutter 1997). However, a survey and removal/addition investigation of Labroides dimidiatus in the Red Sea found little short-term impact after removal but a significant decline in fish diversity after 4–20 months; immigration or experimental addition of cleaners also resulted in a significant increase in fish diversity within the first few weeks (Bshary 2003). Additionally, an 18-month study that excluded L. dimidiatuscleaners from small Australian reefs showed that exclusion reefs had half the species diversity and one-fourth the abundance of fishes of reference reefs (Grutter et al. 2003). The strongest impact in both long-term studies was on large, mobile species – the same species that are likely to affect other reef organisms via predation and grazing. Hence cleanerfishes, although small and relatively rare, can act as keystone species, affecting the “movement patterns, habitat choice, activity, and local diversity and abundance of a wide variety of reef fish species” (Grutter et al. 2003, p. 64).

Some interspecific associations involve exploitation of one species’ feeding habits to the benefit of another species. Fishes that dig in the substrate, such as stingrays, goatfishes (Mullidae), suckers (Catostomidae), and Yellow Perch are commonly followed by other fishes that feed on invertebrates disturbed by the digger’s activities (termed “scroungers and producers” in the behavioral literature). Such following and scrounging has also been observed among European wrasses, the producer species being much larger than the scrounger (Zander & Nieder 1997). The purportedly commensal relationship between shark-sucking remoras (Echeneidae) and large hosts such as sharks and rays is probably of this nature, involving feeding by the remora on leftovers following a host’s meal. However, actual interactions between host and hitchiker are seldom observed. Some remoras may clean parasites off their hosts, which would be mutualistic, whereas others may create a hydrodynamic burden, particularly when attached to relatively small hosts, creating a parasitic situation. Certain postural changes seen in sharks suggest they are trying to get a remora to move to a less sensitive part of the shark’s body (Ritter 2002), although other observations suggest that sharks and rays that accelerate or jump clear of the water may be attempting to dislodge remoras (e.g., Brunnschweiler 2006).

Symbiotic interactions with non-fish species generally involve the use of invertebrates as spawning substrates, as predator refuges, to avoid extreme climatic environmental conditions (e.g., protection from desiccation or wave action), and as shoal mates. The Bitterling, a European cyprinid, lays eggs in the mantle cavity of a freshwater mussel. These eggs hatch after a month and are expelled in the excurrent flow from the mussel. The mussel benefits in that its own larvae are parasitic on the gills of adult bitterlings. The proximity that bitterlings maintain to the mussels, with males establishing territories over the mussels and females inserting their ovipositors into the bivalves, undoubtedly facilitates attachment of the mussel larvae to the fish host (Breder & Rosen 1966).

The use of an invertebrate as a structural refuge against predators is common. Shrimpfish (Centriscidae), clingfishes (Gobieosocidae), cardinalfishes (Apogonidae), and juvenile grunts hover among the spines of long-spined sea urchins or rest beneath the urchins. Such fishes are usually clear or white with black stripes. Some fishes seek shelter inside living invertebrates, a habit called inquilinism orendoecism. The Caribbean conchfish, Astrapogon stellatus (Apogonidae), lives by day in the mantle cavity of a queen conch, a large gastropod. Individual conchfish forage at night on small crustaceans and enter the siphon canal of a live conch an hour before sunrise. Other cardinalfishes live with crown-of-thorns starfish, sea anemones, and sea urchins. Members of the elongate pearlfish family, Carapidae, similarly live by day inside mollusks (see Fig. 14.25) and various echinoderms such as sea cucumbers and pincushion starfish, which they enter via the anus; as many as 15 individual pearlfish have been found in a single sea cucumber host. Pearlfishes, the more primitive species of which are freeliving, are also nocturnal foragers on small invertebrates but cross the line from commensalism to parasitism by consuming the viscera of their host (Thresher 1980, 1984; Parmentier & Vandewalle 2005). Dependence on finding a host can be costly to settling larvae, as indicated by the large number of pearlfish tenuis larvae that have been found in the stomachs of adult pearlfishes (Tyler et al. 1992). Other inquiline species include liparid snailfishes (e.g., Liparis inquilinus) and Red Hake, Urophycis chuss (Phycidae), that inhabit sea scallops and can be found together in a single scallop (Luczkovich et al. 1991). 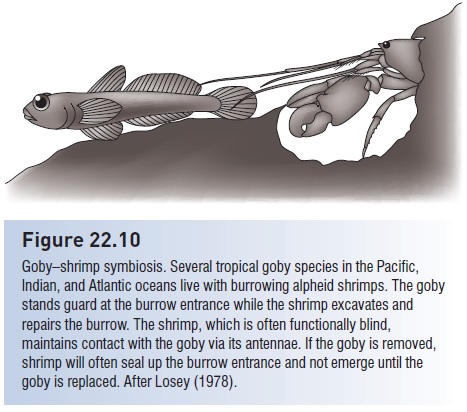 Goby–shrimp symbiosis. Several tropical goby species in the Pacific, Indian, and Atlantic oceans live with burrowing alpheid shrimps. The goby stands guard at the burrow entrance while the shrimp excavates and repairs the burrow. The shrimp, which is often functionally blind, maintains contact with the goby via its antennae. If the goby is removed, shrimp will often seal up the burrow entrance and not emerge until the goby is replaced. After Losey (1978).

Symbioses between fishes and cnidarians are common, including fish that live on soft and hard corals (various gobies), or among the tentacles of jellyfish and Portuguese men-of-war (e.g., the Man-of-war Fish, Nomeus gronovii, Nomeidae). Although many fishes associate with sea anemones (Randall & Fautin 2002), including eastern Pacific Painted Greenlings Oxylebias pictus (Elliott 1992), the most highly evolved relationships are between pomacentrid anemonefishes and large sea anemones in the tropical Pacific and Indian oceans (Fig. 22.11). 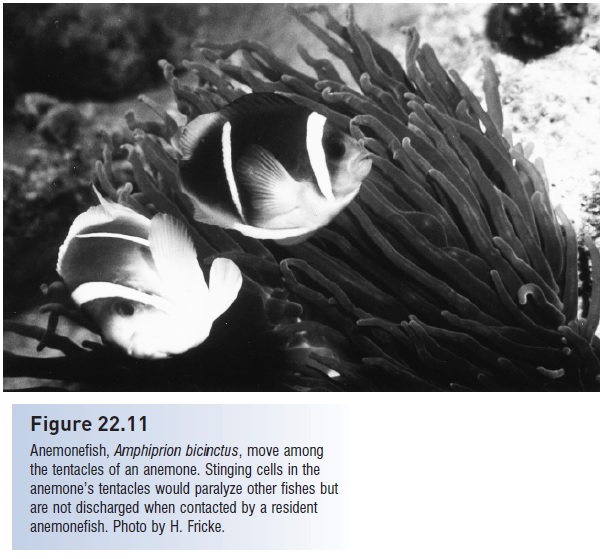 Anemonefish, Amphiprion bicinctus, move among the tentacles of an anemone. Stinging cells in the anemone’s tentacles would paralyze other fishes but are not discharged when contacted by a resident anemonefish. Photo by H. Fricke. fish species in the genera Amphiprion and Premnas and 10 species of anemones are involved. Details differ among species of fishes and anemones, but basically any other fish that touches the anemone’s tentacles is likely to be stung by nematocysts (stinging cells), paralyzed, and consumed, whereas anemonefish frequently contact the tentacles and are not stung. Although the exact mechanism that protects anemonefishes from the nematocysts remains unclear, mucus secretion, presumably by the fish, plays an integral role in an acclimation process that is aided by differing degrees of innate protection from anemone stings (Elliott & Mariscal 1997).

An anemonefish’s intimacy with its host is considerable. Embryonic anemonefish imprint on the smell of host anemone species prior to dispersing as larvae, which influences their choice of settlement sites after the planktonic period (Arvedlund et al. 1999). Most individuals seldom move more than a few meters from their host, and adults remain with a single host for life. The relationship is considered mutualistic because the fish gains protection from predators on both itself and its eggs (which are laid on coral rock under the anemone) and also consumes other anemone symbionts and even the anemone itself. In turn, anemonefish chase away predatory butterfl yfishes that eat anemones. The fish may also remove feces and debris from the anemone’s upper surface, may drop food onto the anemone, may consume anemone parasites, and the fish’s excreted waste products may stimulate the growth of symbioticalgae (zooxanthellae) within the anemone (Mariscal 1970; Allen 1975; Fautin 1991). The combined benefits of these activities to the anemone are substantial: anemones that harbor anemonefishes have faster growth rates, higher asexual reproduction (fi ssion) rates, and lower mortality rates than anemones that lack the symbionts (Holbrook & Schmitt 2005).

For fishes that use invertebrates as protection, such as gobies in invertebrate burrows and clownfishes in anemones, refuges may be in short supply and territorial defense of the structure is fairly common (e.g., Grossman 1980). This is the probable explanation for the complex social system, territorial defense, and sex reversal of anemonefishes, populations of which appear to be limited by the number of available anemones.