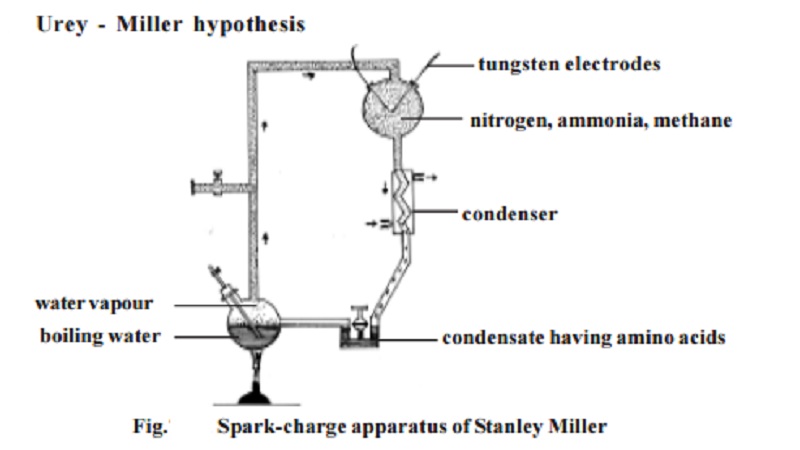 Our planet earth is inhabited by an enormous variety of living organ-isms. The plants and animals show remarkable biodiversity. The diversities mostly appear as adaptations for diverse habitats and living methods adopted. This vastness has always made people wonder about the origin of life and diversity.

Our planet earth is inhabited by an enormous variety of living organ-isms. The plants and animals show remarkable biodiversity. The diversities mostly appear as adaptations for diverse habitats and living methods adopted. This vastness has always made people wonder about the origin of life and diversity. To a certain extent Charles Darwin's natural selection concept pro-vides an explanation towards an understanding of evolution of various kinds of life forms. However the theory of origin of life is still a matter of speculation. Several intelligent explanations had been provided to account for the origin of life on earth.

According to the proponents of this theory all living forms with their richness in diversity were created abruptly by a super natural power. The support or acceptance of this theory is mostly due to faith rather than experi-mental or scientific evidences. However, supporters of this theory have re-cently created a new discipline called 'creation science'.

This theory states that life came to earth from some other planet or star. The resistant spores that lead to life on earth are named as 'cosmozoa'. They reached earth accidentally. Under favourable conditions they evolved and produced all forms of life on earth. An acceptance of this theory needs evidence for the existence of extra-terrestrial life.

3. Theory of spontaneous generation or abiogenesis

The theory that life originated from non-living material is now called abiogenesis. An earlier version of this theory was spontaneous genera-tion or the origin of life without apparent cause. The ancient Greek philoso-phers like Thales, Empedocles and Aristotle supported this concept.

Thales (624-548 BC) suggested that oceanic water was the mother from which all living forms originated. According to Empedocles(540-433 BC) life originated by itself from non living matter and imperfect forms were

replaced by perfect forms. Aristotle (384-322 BC) proposed that living forms are animated forms of non-living matter. The activation was due to vital forces or guiding intelligence. He further stated that the vital forces operate con-stantly and improve the living world.

In the 17th century the idea of abiogenesis was opposed by an Italian physician Francisco Redi (1621-1697). For the first time he proposed through experiments, that life could arise only from pre-existing living things. He tested his hypothesis by sealing meat inside four closed flask, while leaving another four meat filled flasks open. Soon the meat in the open flasks was full of maggots. Flies were entering and leaving the flask. Even after many days no worm appeared in the closed and sealed flask. This experiment confirmed his idea that new life can come only from early life.

This theory is concernced with the origin of earth and other planets. According to this theory the universe originated in a 'big bang'. All matter was created in this big bang including the matter of which stars and planets are composed of. According to this theory as a young star increases in den-sity, it gets heated up due to increasing pressure. When a certain critical tem-perature is reached thermonuclear reactions will begin and cause a 'big bang'. It is believed that our sun was formed in this way.

Alexander I. Oparin, a Russian chemist published a paper in 1924. He advanced a new theory regarding origin of life. This theory is called the 'theory of primary abiogenesis'. According to Oparin conditions on Earth today are no longer suitable to the production of life from non living matter. The primor-dial earth, about 2600 million years ago provided suitable atmosphere for the origin of life. The earth during that period had many simple chemical com-pounds. More and more complex organic compounds were formed under the influence of electric charges and Ultra violet rays. The origin of complex organic molecules made the origin of life easier.

Haldane was a British biochemist. He was the first to propose that life originated on earth, when the atmosphere was devoid of O2 gas. Today's earth is surrounded by oxygen and its derivative ozone. The ozone layer protects earth by preventing the entry of harmful cosmic radiations. In 1929, he suggested that an atmosphere lacking O2 would have no ozone layer. Hence ultra violet rays were freely entering earth's atmosphere. In a reducing atmosphere this could have caused photochemical reactions resulting in the gen-eration of organic molecules. These molecules gradually accumulated in the oceans as a dilute 'soup' .

U.S scientists Harold Urey and Stanley Miller in 1950's proposed and attempted to prove that amino acids can be synthesised outside living systems. They conducted experiments in which a gas mixture containing hydrogen, ammonia, methane and water vapour was subjected to electric spark. This trial yielded aldehydes, amino acids and carboxylic acids. They visualised the existence of a similar situation and happening of events resulting in a large scale accumulation of diverse biomolecules in the primordial earth. These chemical incidents could have paved the way for the origin of a cellular organisation.

Coacervates were considered to represent the protocell model. The tendency of biological polymers to form polymer-rich droplets called coacer-vates has been proposed by Oparin. He reported that coacervates are readily formed from aqueous suspension of proteins, polysaccharides and nucleic ac-ids. Biochemical processes like enzyme action and electron transport can happen within a coacervate. Such systems were considered the forerunner of living cells.