The immune system has evolved to protect the host from invading pathogens and to eliminate disease.

ELEMENTS OF THE IMMUNE SYSTEM

The innate immune system is the first line of defense against invading pathogens (eg, bacteria, viruses, fungi, parasites) and consists of mechanical, biochemical, and cellular components. Mechanical components include skin/epidermis and mucus; bio-chemical components include antimicrobial peptides and proteins (eg, defensins), complement, enzymes (eg, lysozyme, acid hydro-lases), interferons, acidic pH, and free radicals (eg, hydrogen per-oxide, superoxide anions); cellular components include neutrophils, monocytes, macrophages, natural killer (NK), and natural killer-T (NKT) cells. Unlike adaptive immunity, the innate immune response exists prior to infection, is not enhanced by repeated infection, and is generally not antigen-specific. An intact skin or mucosa is the first barrier to infection. When this barrier is breached, an immediate innate immune response, referred to as “inflammation” is provoked that ultimately leads to destruction of the pathogen. The process of pathogen destruction can be accom-plished, for example, by biochemical components such as lysozyme (which breaks down the protective peptidoglycan cell wall) and the split products arising from complement activation. Complement components (Figure 55–1) enhance macrophage and neutrophil phagocytosis by acting as opsonins (C3b) and chemoattractants (C3a, C5a), which recruit immune cells from the bloodstream to the site of infection. The activation of comple-ment eventually leads to pathogen lysis via the generation of a membrane attack complex that creates holes in the membrane and results in leakage of cellular components. 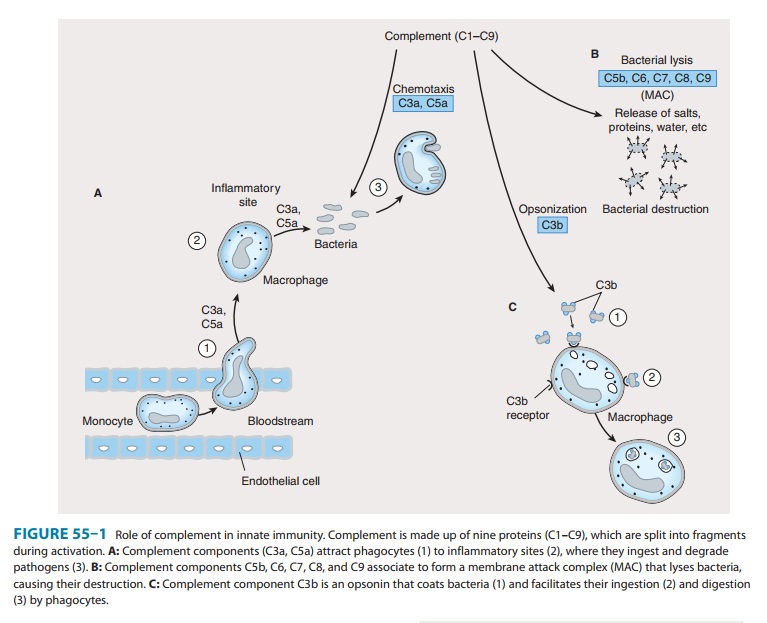 In addition to monocytes and neutrophils, natural killer (NK),natural killer-T (NKT), and gamma-delta T (fc T) cells recruitedto the inflammatory site contribute to the innate response by secret-ing interferon-gamma (IFN-γ) and IL-17, which activate resident tissue macrophages and dendritic cells and recruit neutrophils respectively to successfully eliminate invading pathogens. NK cells are so called because they are able to recognize and destroy virus-infected normal cells as well as tumor cells without prior stimula-tion. This activity is regulated by “killer cell immunoglobulin-like receptors” (KIRs) on the NK cell surface that are specific for major histocompatibility complex (MHC) class I molecules. When NK cells bind self MHC class I proteins (expressed on all nucleated cells), these receptors deliver inhibitory signals, preventing them from killing normal host cells. Tumor cells or virus-infected cells that have down-regulated MHC class I expression do not engage these KIRs, resulting in activation of NK cells and subsequent destruction of the target cell. NK cells kill target cells by releasing cytotoxic granules such as perforins and granzymes that induce programmed cell death.

The adaptive immune system is mobilized by cues from the innate response when the innate processes are incapable of coping with an infection. The adaptive immune system has a number of char-acteristics that contribute to its success in eliminating pathogens. These include the ability to (1) respond to a variety of antigens, each in a specific manner; (2) discriminate between foreign (“non-self ”) antigens (pathogens) and self antigens of the host; and (3) respond to a previously encountered antigen in a learned way by initiating a vigorous memory response. This adaptive response culminates in the production of antibodies, which are the effec-tors of humoral immunity; and the activation of T lymphocytes, which are the effectors of cell-mediated immunity.

The induction of specific adaptive immunity requires the par-ticipation of professional antigen-presenting cells (APCs), which include dendritic cells (DCs), macrophages, and B lymphocytes. These cells play pivotal roles in the induction of an adaptive immune response because of their capacity to phagocytize particu-late antigens (eg, pathogens) or endocytose protein antigens, and enzymatically digest them to generate peptides, which are then loaded onto class I or class II MHC proteins and “presented” to the cell surface T-cell receptor (TCR) (Figure 55–2). CD8 T cells recognize class I-MHC peptide complexes while CD4 T cells rec-ognize class II-MHC peptide complexes. At least two signals are necessary for the activation of T cells. The first signal is delivered following engagement of the TCR with peptide-bound MHC molecules. In the absence of a second signal, the T cells become unresponsive (anergic) or undergo apoptosis. The second signal involves ligation of costimulatory molecules (CD40, CD80 [also known as B7-1], and CD86 [also known as B7-2]) on the APC to 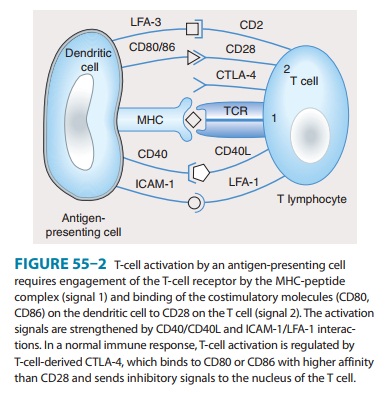 their respective ligands (CD40L for CD40, CD28 for CD80 or CD86). Activation of T cells is regulated via a negative feedback loop involving another molecule known as T-lymphocyte-associated antigen 4 (CTLA-4). Following engagement of CD28 with CD80 or CD86, CTLA-4 in the cytoplasm is mobilized to the cell surface where, because of its higher affinity of binding to CD80 and CD86, it outcompetes or displaces CD28 resulting in suppression of T-cell activation and proliferation. This property of CTLA-4 has been exploited as a strategy for sustaining a desirable immune response such as that directed against cancer. A recombi-nant humanized antibody that binds CTLA-4 (ipilimumab) pre-vents its association with CD80/CD86. In so doing, the activated state of T cells is sustained. Recently completed vaccine trials in metastatic melanoma patients receiving anti-CTLA-4 antibody reported objective and durable clinical responses in a few patients. Unfortunately, these beneficial responses were associated with the development of autoimmune toxicity in some patients, raising concern about this approach.

T lymphocytes develop and learn to recognize self and non-self antigens in the thymus; those T cells that bind with high affinity to self antigens in the thymus undergo apoptosis (negative selection), while those that are capable of recognizing foreign antigens in the presence of self MHC molecules are retained and expanded (posi-tive selection) for export to the periphery (lymph nodes, spleen, mucosa-associated lymphoid tissue, peripheral blood), where they become activated after encountering MHC-presented peptides (Figures 55–2 and 55–3). 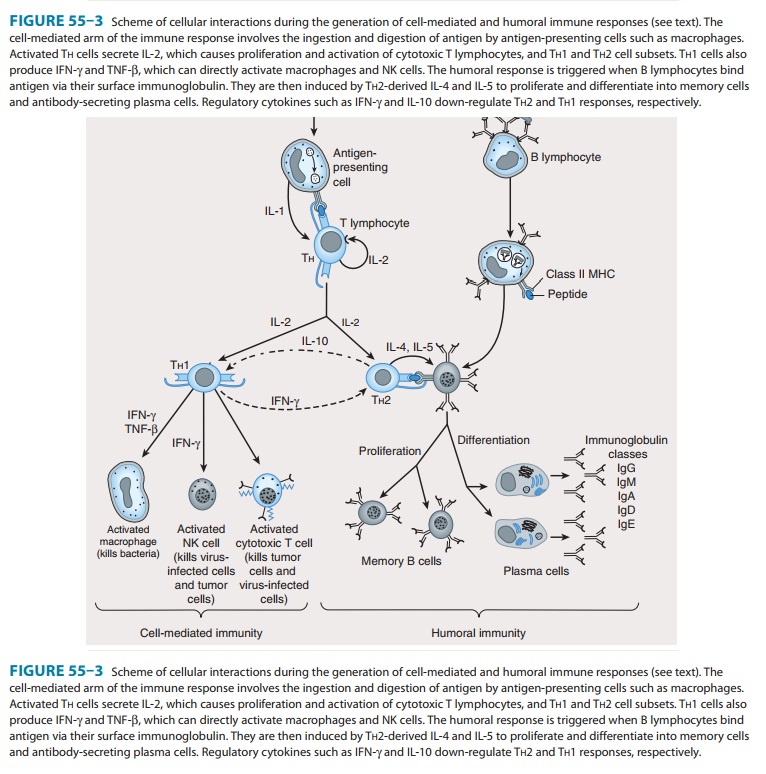 Studies using murine T-cell clones have demonstrated the pres-ence of two subsets of T helper lymphocytes (TH1 and TH2) based on the cytokines they secrete after activation. This demarcation is not so clear-cut in humans. The TH1 subset characteristicallyproduces IFN-γ, IL-2, and IL-12 and induces cell-mediated immunity by activation of macrophages, cytotoxic T cells (CTLs), and NK cells. The TH2 subset produces IL-4, IL-5, IL-6, and IL-10 (and sometimes IL-13), which induce B-cell proliferation and differentiation into antibody-secreting plasma cells. IL-10 produced by T H2 cells inhibits cytokine production by TH1 cells via the down-regulation of MHC expression by APCs. Conversely, IFN-γ produced by TH1 cells inhibits the proliferation of TH2 cells (Figure 55–3). Although these subsets have been well described in vitro, the nature of the antigenic challenge that elicits

a TH1 or TH2 phenotype is less clear. Extracellular bacteria typi-cally cause the elaboration of TH2 cytokines, culminating in the production of neutralizing or opsonic antibodies. In contrast, intracellular organisms (eg, mycobacteria) elicit the production of TH1 cytokines, which lead to the activation of effector cells such as macrophages. A less well-defined T-cell subset (TH3) has been described that produces transforming growth factor-β (TGF-β), whose numerous functions include down-regulation of prolifera-tion and differentiation of T lymphocytes.

Recently, a subset of CD4 T cells that secrete IL-17 (TH17) has been implicated in neutrophil recruitment to sites of inflamma-tion. A population of CD4 T cells that is essential for preventing autoimmunity and allergy as well as maintaining homeostasis and tolerance to self antigens is the regulatory (Treg) T cell. In the mouse, this cell population exists as natural Treg (nTreg), derived directly from the thymus, and induced (adaptive) Treg (iTreg), generated from naïve CD4 T cells in the periphery. Both popula-tions have also been shown to inhibit antitumor immune responses and are implicated in fostering tumor growth and progression. Recent attempts to distinguish both populations have resulted in the discovery of a transcription factor, Helios, in nTreg but not in iTreg cells.

CD8 T lymphocytes recognize endogenously processed pep-tides presented by virus-infected cells or tumor cells. These pep-tides are usually nine-amino-acid fragments derived from virus or protein tumor antigens in the cytoplasm and are loaded onto MHC class I molecules (Figure 55–2) in the endoplasmic reticu-lum. In contrast, class II MHC molecules present peptides (usu-ally 11–22 amino acids) derived from extracellular (exogenous) pathogens to CD4 T helper cells. In some instances, exogenous antigens, upon ingestion by APCs, can be presented on class I MHC molecules to CD8 T cells. This phenomenon, referred to as “cross-presentation,” involves retro-translocation of antigens from the endosome to the cytosol for peptide generation in the prote-osome and is thought to be useful in generating effective immune responses against infected host cells that are incapable of priming T lymphocytes. Upon activation, CD8 T cells induce target cell death via lytic granule enzymes (“granzymes”), perforin, and the Fas-Fas ligand (Fas-FasL) apoptosis pathways.

B lymphocytes undergo selection in the bone marrow, during which self-reactive B lymphocytes are clonally deleted while B-cell clones specific for foreign antigens are retained and expanded. The repertoire of antigen specificities by T cells is genetically determined and arises from T-cell receptor gene rear-rangement while the specificities of B cells arise from immuno-globulin gene rearrangement; for both types of cells, thesedeterminations occur prior to encounters with antigen. Upon an encounter with antigen, a mature B cell binds the antigen, inter-nalizes and processes it, and presents its peptide—bound to class MHC—to CD4 helper cells, which in turn secrete IL-4 and IL-5.

These interleukins stimulate B-cell proliferation and dif-ferentiation into memory B cells and antibody-secreting plasma cells. The primary antibody response consists mostly of IgM-class immunoglobulins. Subsequent antigenic stimulation results in a vigorous “booster” response accompanied by class (isotype) switching to produce IgG, IgA, and IgE antibodies with diverse effector functions (Figure 55–3). These antibodies also undergo affinity maturation, which allows them to bind more efficiently to the antigen. With the passage of time, this results in acceler-ated elimination of microorganisms in subsequent infections. Antibodies mediate their functions by acting as opsonins to enhance phagocytosis and cellular cytotoxicity and by activating complement to elicit an inflammatory response and induce bacte-rial lysis (Figure 55–4). 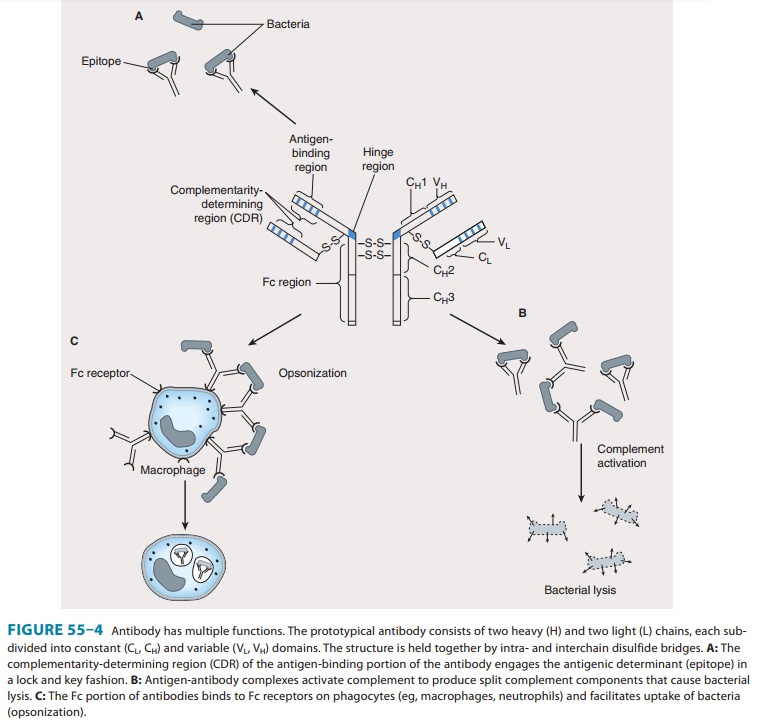