Type I (immediate) sensitivity allergy to certain drugs occurs when the drug, not capable of inducing an immune response by itself, cova-lently links to a host carrier protein (hapten).

Type I (immediate) sensitivity allergy to certain drugs occurs when the drug, not capable of inducing an immune response by itself, cova-lently links to a host carrier protein (hapten). When this happens, the immune system detects the drug-hapten conjugate as “modified self” and responds by generating IgE antibodies specific for the drug-hapten. It is not known why some people mount an IgE response to a drug, while others mount IgG responses. Under the influence of IL-4, IL-5, and IL-13 secreted by TH2 cells, B cells specific for the drug secrete IgE antibody. The mechanism for IgE-mediated immediate hypersensitivity is diagrammed in Figure 55–5. 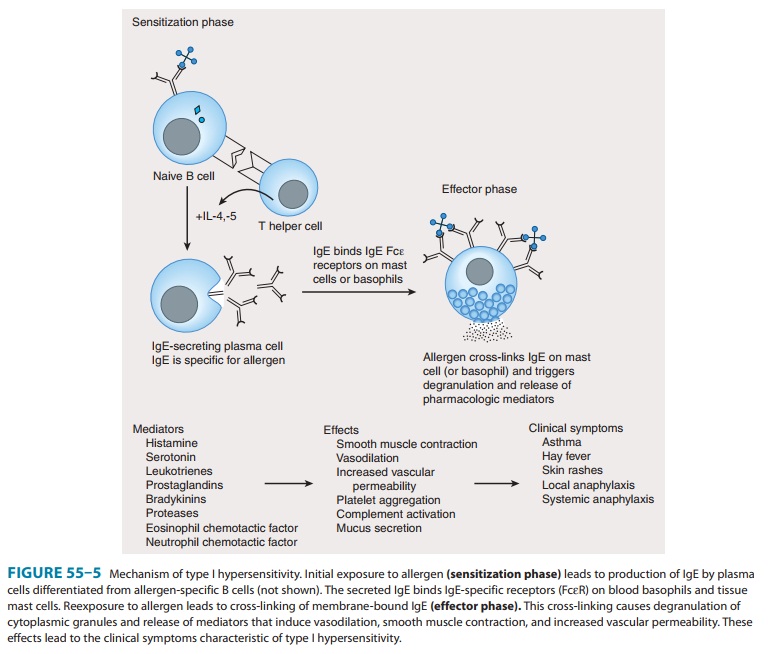 Fixation of the IgE antibody to high-affinity Fc receptors (FcεRs) on blood basophils or their tissue equivalent (mast cells) sets the stage for an acute allergic reaction. The most important sites for mast cell distribution are skin, nasal epithelium, lung, and gastrointestinal tract. When the offending drug is reintroduced into the body, it binds and cross-links basophil and mast cell-surface IgE to signal release of the mediators (eg, histamine, leu-kotrienes;) from granules. Mediator release is associated with calcium influx and a fall in intracellular cAMP within the mast cell. Many of the drugs that block media-tor release appear to act through the cAMP mechanism (eg, cate-cholamines, glucocorticoids, theophylline), others block histamine release, and still others block histamine receptors. Other vasoac-tive substances such as kinins may also be generated during hista-mine release. These mediators initiate immediate vascular smooth muscle relaxation, increased vascular permeability, hypotension, edema, and bronchoconstriction.

One can test an individual for possible sensitivity to a drug by a simple scratch test, ie, by applying an extremely dilute solution of the drug to the skin and making a scratch with the tip of a needle. If allergy is present, an immediate (within 10–15 minutes) wheal (edema) and flare (increased blood flow) will occur. However, skin tests may be negative in spite of IgE hypersensitivity to a hapten or to a metabolic product of the drug, especially if the patient is taking steroids or antihistamines.

Drugs that modify allergic responses act at several links in this chain of events. Prednisone, often used in severe allergic reactions, is immunosuppressive; it blocks proliferation of the IgE-producing clones and inhibits IL-4 production by T helper cells in the IgE response, since glucocorticoids are generally toxic to lymphocytes. In the efferent limb of the allergic response, isoproterenol, epi-nephrine, and theophylline reduce the release of mediators from mast cells and basophils and produce bronchodilation. Epinephrine opposes histamine; it relaxes bronchiolar smooth muscle and con-tracts vascular muscle, relieving both bronchospasm and hypoten-sion. The antihistamines competitively inhibit histamine, which would otherwise produce bronchoconstriction and increased cap-illary permeability in the end organ. Glucocorticoids may also act to reduce tissue injury and edema in the inflamed tissue, as well as facilitating the actions of catecholamines in cells that may have become refractory to epinephrine or isoproterenol. Several agents directed toward the inhibition of leukotrienes may be useful in acute allergic and inflammatory disorders .

When reasonable alternatives are not available, certain drugs (eg, penicillin, insulin) must be used for life-threatening illnesses even in the presence of known allergic sensitivity. In such cases, desen-sitization (also called hyposensitization) can sometimes be accom-plished by starting with very small doses of the drug and gradually increasing the dose over a period of hours to the full therapeutic range . This practice is hazardous and must be performed under direct medical supervision, as anaphylaxis may occur before desensitization has been achieved. It is thought that slow and progressive administration of the drug gradually binds all available IgE on mast cells, triggering a gradual release of granules. Once all of the IgE on the mast cell surfaces has been bound and the cells have been degranulated, therapeutic doses of the offend-ing drug may be given with minimal further immune reaction. Therefore, a patient is only desensitized during administration of the drug.