The Nearctic region consists of North America south to the Mexican plateau.

One effective way to understand the distribution of freshwater fishes is to recognize six regions or realms, as Alfred Russel Wallace proposed in 1876: (i) Nearctic (North America except tropical Mexico); (ii) Neotropical (Middle and South America, including tropical Mexico); (iii) Palearctic (Europe and Asia north of the Himalayan Mountains); (iv) African (or Ethiopian); (v) Oriental (Indian subcontinent, Southeast Asia, the Philippines, and most of Indonesia); and (vi) Australian (Australia, New Guinea, and New Zealand). A detailed discussion of the fauna of these regions was provided by Darlington (1957), and maps of the distributions of freshwater fish families are presented by Berra (2007).

The Nearctic region consists of North America south to the Mexican plateau. The North American freshwater fish fauna is the best known and has been mapped by Lee et al. (1980) and discussed thoroughly by Hocutt and Wiley (1986) and Mayden (1993). There are 14 families of primary freshwater fishes (see Table 16.2) and a total of about 950 species of fishes in the region. The most speciose families include three families of ostariophysans – the Cyprinidae, Catostomidae, and Ictaluridae (the only North American family of Recent catfishes) – plus two percoid families – the Percidae (especially the darters) and the Centrarchidae. The ranges of five Nearctic families – the Cyprinidae, Catostomidae, Ictaluridae, Percidae, and Centrarchidae – extend south well into Middle America. Included in this area are the Southern Appalachian river drainages, with about 350 species, the richest diversity of temperate freshwater fishes of any continent (e.g., Lydeard & Mayden 1995).

Primary, secondary, and selected peripheral freshwater fish families and the geographic areas where they occur 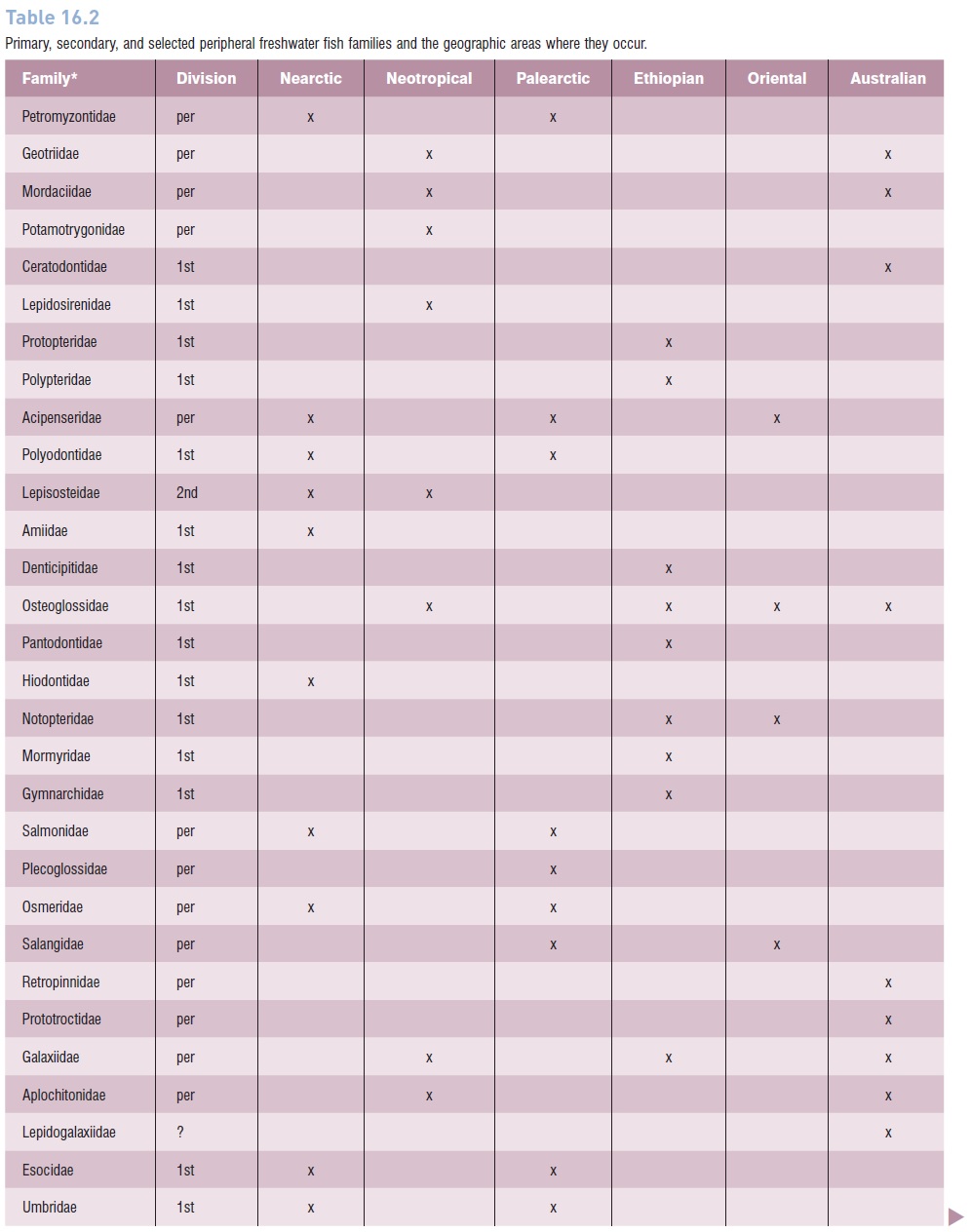 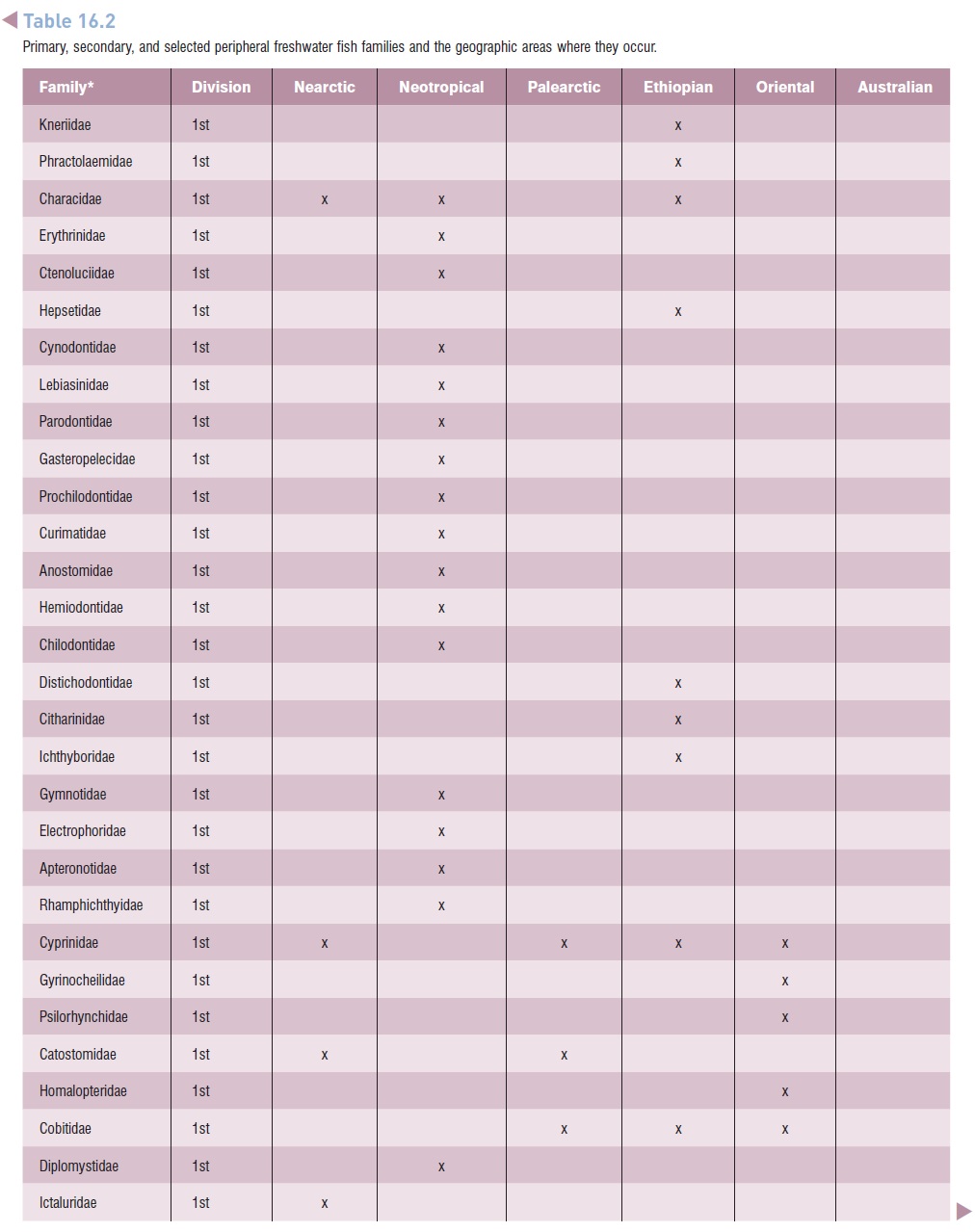 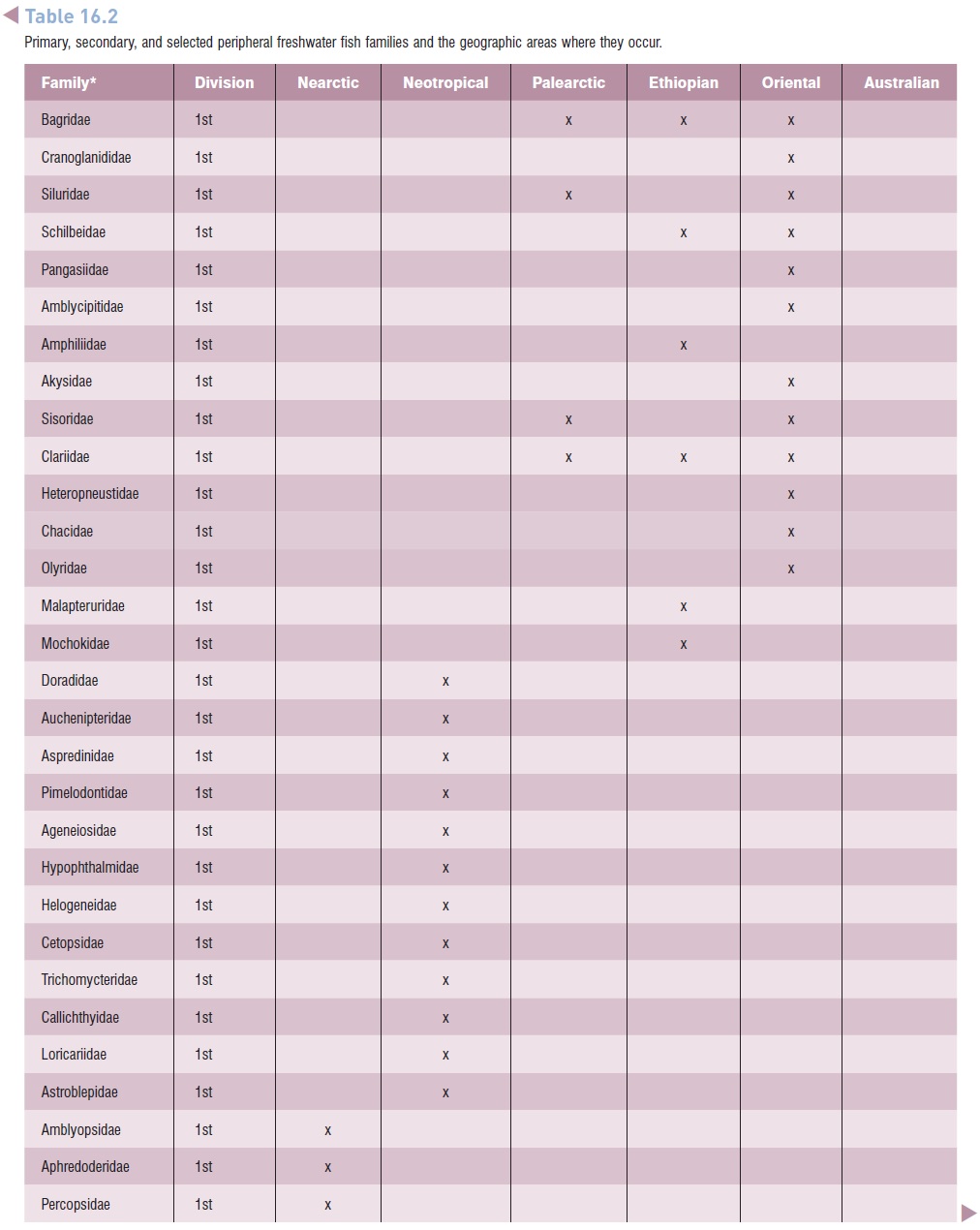 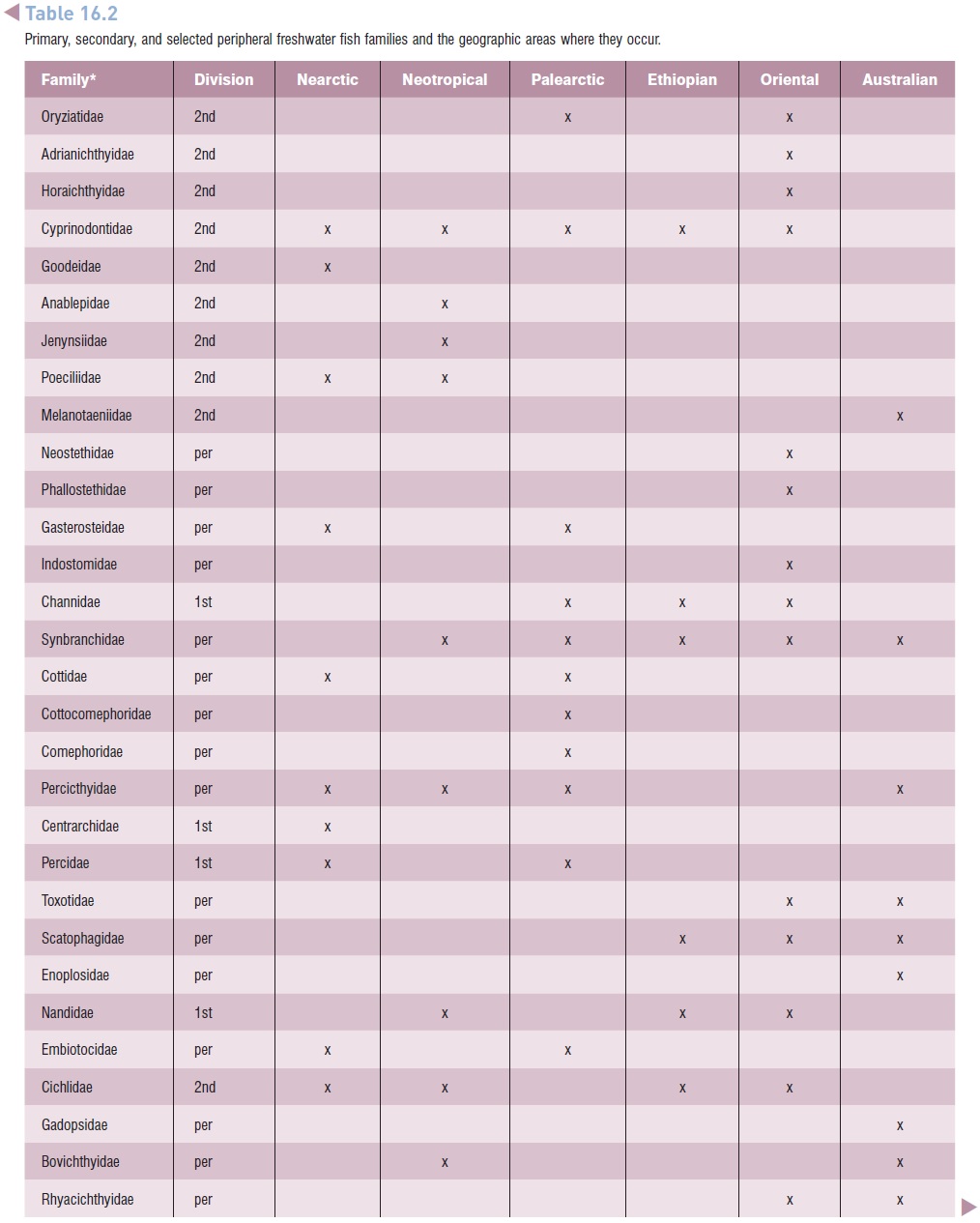 This region can be divided into 10 provinces (Fig. 16.8) based mainly on distribution data for freshwater fishes, mussels, and crayfish (Abell et al. 2000, as modified by Lévêque et al. 2008).

Main ichthyological provinces in North and Middle America. Numbers refer to regions in the text. From Lévêque et al. (2008). 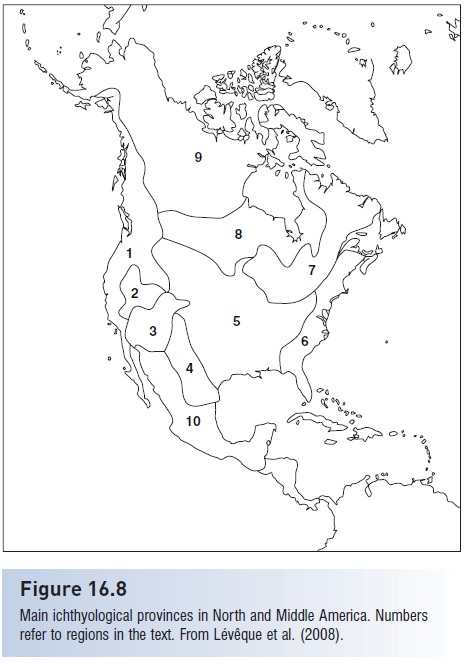 1 The Pacific Coastal Province contains the Pacific drainages from the Yukon River to Mexico and also the interior drainages west of the Rocky Mountains. It includes the Columbia River drainage with 61 freshwater species including two endemic relict species, a mudminnow (Umbridae) and a trout-perch (Percopsidae). The province also includes the Klamath and Rogue rivers along the border of California and Oregon, with about 30 freshwater species and the Sacramento–San Joaquin drainage system of California that contains 43 species of freshwater fishes. About 42% of these are endemic, including 10 species of minnows and the Sacramento Perch (Archoplites interruptus), the only centrarchid occurring natively outside of eastern North America.

2 The Great Basin Province contains 150 internal drainage systems that are now very arid but contained large lakes during periods of the Pleistocene. There are about 50 species, mostly minnows, suckers, killifishes, and whitefishes, with about 80% endemism (Miller 1958

3 The Colorado Province contains about 32 species of freshwater fishes, 75% of which are endemic, with many species threatened by dams, water extraction, and introduced species (see  Dam building).

4 The Rio Grande Province is essentially the Rio Grande River and its tributaries. It contains 154 species (about 80 endemic), including the northernmost species of two Neotropical families, the Characidae (Astyanax mexicanus) and the Cichlidae (Cichlasoma cyanoguttatum).

5 The Mississippi Province is the largest Nearctic province, comprising the area drained by the Mississippi and Missouri rivers, and contains the most species, about 375 (about 130 of which are endemic).

6 The Atlantic Coastal Province contains the rivers that drain into the Atlantic Ocean from New Brunswick to Florida and continues through Florida’s gulf-draining rivers. The northern part of the province has a relatively high proportion of anadromous fishes, while the southern portion has numbers of secondary fishes that have invaded from marine waters.

7 The Great Lakes–St. Lawrence Province is largely derived from the Mississippi Province.

8 The Hudson Bay Province includes most of central Canada and part of the United States. Its fish fauna of about 100 species (Crossman & McAllister 1986) is most similar to that of the Mississippi Province. Minnows are an important component in the southernmost part of the province but are largely replaced by trouts, sculpins, suckers, and pickerels in the northern part of the province.

9 The Arctic Province includes Canadian and Alaskan rivers that drain into the Arctic Ocean. More than half of the 66 freshwater species (Lindsey & McPhail 1986) belong to diadromous families, one-third are primary freshwater species, and 11% belong to marine families. This province shares some species, such as the Alaskan Blackfish (Dallia pectoralis), with

Siberia, which belongs in the Palearctic region.