Five groups of primary freshwater fishes have more recent distributions than the six archaic groups. These include the pickerels and relatives, the darters and perches, the sunfishes, the cichlids, and the Ostariophysi.

Five groups of primary freshwater fishes have more recent distributions than the six archaic groups. These include the pickerels and relatives, the darters and perches, the sunfishes, the cichlids, and the Ostariophysi.

The suborder Esocoidei contains two families – Esocidae, the pickerels from North America and Eurasia, and Umbridae, the mudminnows from eastern and western United States – and one relict species, Umbra krameri, from the Danube River in Europe (Fig. 16.15). The Northern Pike, Esox lucius, ranges across northern North America, Europe, and Asia, giving it the broadest natural distribution of any fish in the northern hemisphere. 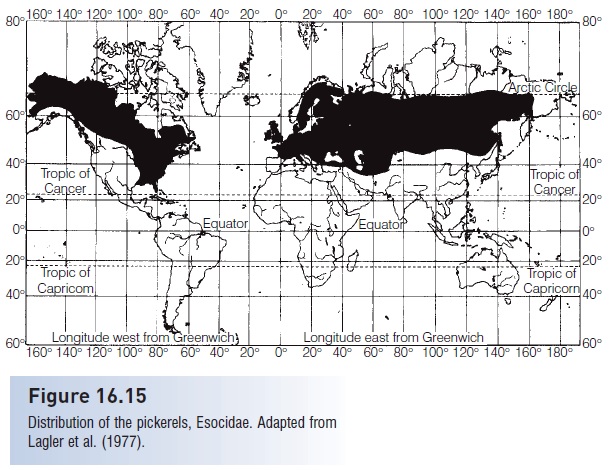 Distribution of the pickerels, Esocidae. Adapted from Lagler et al. (1977).

Three families of acanthopterygian fishes are of major importance in fresh waters. The Percidae, the perches and darters, includes about 175 species, 15 of which are European and 160 of which are American, including all the darters, tribe Etheostomatini (Fig. 16.16). The black basses and sunfishes (Centrarchidae) include 25 species, 24 from eastern North America and one relict species,Archoplites interruptus, from California (Fig. 16.17). The Cichlidae ecologically replaces the Centrarchidae and Percidae in the southern continents of South America, Africa, Madagascar, and southern India (Fig. 16.17). This large family, which may have more than 2000 species, is usually considered a secondary freshwater family because some species show salinity tolerance. Distributions of the first four groups are summarized in Fig. 16.18.

The largest group of freshwater fishes is the series Otophysi of the superorder Ostariophysi, which includes four orders: Cypriniformes, Characiformes, Siluriformes, and Gymnotiformes.

The Cypriniformes includes three large and two small families found primarily in the northern continents. The Cyprinidae, the carps and minnows, is one of the largest families of freshwater fishes, with about 2000 species. It is found in North America, Africa, Europe, and Asia (Fig. 16.19). The highest diversity of cyprinids is found in Asia. The 75 species of suckers, Catostomidae, are confined to North America, except for a relict genus in China, Myxocyprinus, and a recent reinvasion of Siberia by Catostomus catostomus (Fig. 16.20). The loaches, Cobitidae, are found in Eurasia. The two smaller families, the Gyrinocheilidae and the Balitoridae, occur in Southeast Asia.

Distribution of the darters and perches, Percidae. Adapted from Norman and Greenwood (1975).

Distribution of the sunfishes, Centrarchidae, and cichlids, Cichlidae. Adapted from Lagler et al. (1977).

Summary of recent primary fish distributions (other than Ostariophysi).

Distribution of the minnows and carps, Cyprinidae. Adapted from Lagler et al. (1977).

Distribution of the suckers, Catostomidae. Adapted from Lagler et al. (1977).

The Characiformes, the characins, comprises 10–16 families of tetras and relatives. The greatest diversity of the order is in South America, with 200 genera and over 1000 species. Characins are also widespread in Africa, with 23 genera and 150 species, currently placed in four families.

The Gymnotiformes comprises five families and more than 100 species of electric fishes restricted to South America.

The catfishes, Siluriformes, include about 34 families of diverse fishes and about 2000 species. There is only one freshwater family in North America, the Ictaluridae, including Ictalurus, Ameiurus, and madtoms of the genus Noturus. There are 14 endemic families and more than 1200 species in South America (Lundberg 1993). Some of the families are the suckermouth catfishes, Loricariidae and Astroblepidae, the popular aquarium fishes in the Callichthyidae, and the parasitic catfishes in the Trichomycteridae. Africa has six freshwater siluriform families with about 400 species. Europe has only the Siluridae with two species of Siluris, including the huge S. glanis, reaching 5 m in length and 300 kg. There are several families in Asia. The catfishes also contain two marine families, Ariidae and Plotosidae, making them exceptions to the primary freshwater fish nature of the Siluriformes. To further complicate the issue, the Plotosidae has secondarily invaded fresh waters of Australia and New Guinea. The dominance of otophysans among primary freshwater fishes is summarized in Fig. 16.21. 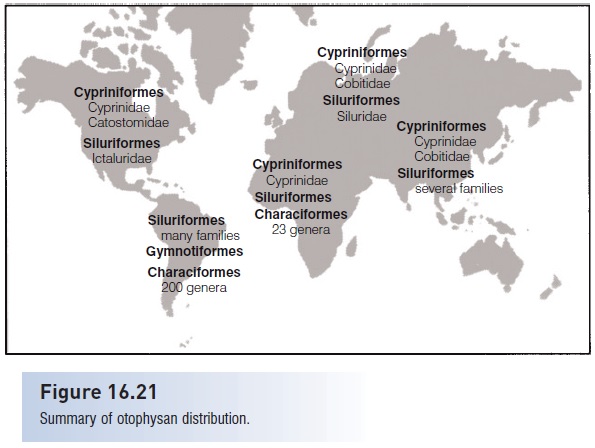