The Indo-West Pacific region – from South Africa and the Red Sea east through Indonesia and Australia to Hawaii and the South Pacific Islands, all the way to Easter Island – contains about one-third of the species of shallow marine fishes, about 3000 species, compared to no more than 1200 in any other region.

The Indo-West Pacific region – from South Africa and the Red Sea east through Indonesia and Australia to Hawaii and the South Pacific Islands, all the way to Easter Island – contains about one-third of the species of shallow marine fishes, about 3000 species, compared to no more than 1200 in any other region. Multiple datasets show global maxima of marine biodiversity to be in the Indo-Malay-Philippines Archipelago. Analysis of distribution data for 2983 marine species of fishes, other vertebrates, and invertebrates reveals a pattern of richness on a finer scale and identifi es a peak of marine biodiversity in the central Philippine Islands and a secondary peak between peninsular Malaya and Sumatra (Carpenter & Springer 2005). Biodiversity is also high in many other marine taxa in this region (Briggs 1974). There are approximately 70 genera and about 500 species of hermatypic (reef-building) corals in this region, which is 10 times the number of species present in the western Atlantic (Rosen 1988). Among other groups, the Indo-West Pacific contains about 1000 species of bivalve mollusks (including all the giant clams, Tridacnidae), twice that in the western Atlantic; and 49 of the 50 species of sea snakes (Hydrophiidae), compared to one species in the eastern Pacific. Some families of fishes such as the whitings (Sillaginidae) and rabbitfishes (Siganidae) are endemic to the Indo-West Pacific.

The Pacific Plate (Fig. 16.3) forms a major biogeographic unit of the Indo-West Pacific. The Pacific Plate is the largest of the earth’s lithospheric plates  and occupies most of the area that has been referred to as the Pacific Basin (Springer 1982). The number of taxa decreases sharply as one proceeds eastward across the western margin of the plate. In addition, there is a high degree of endemism on the plate. 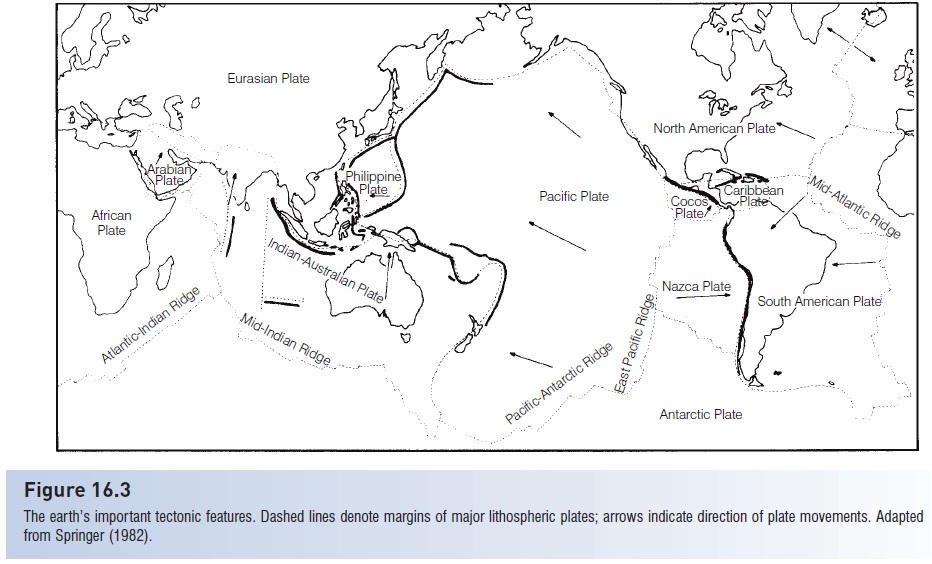 An instructive example of the kinds of distributions one finds associated with specific regions and plates occurs with Spanish mackerels of the genus Scomberomorus (Collette & Russo 1985b). Of the 18 species in the genus, 10 occur in the Indo-West Pacific, but they are noticeably absent from the Pacific Plate (Springer 1982, fi g. 40). One species, Scomberomorus commerson, is widespread throughout much of the Indo-West Pacific. This distributional pattern cannot tell us much because, as with plesiomorphic characters, widespread species are not as informative about the causes of the distribution patterns as those with more restricted distributions.

In contrast, the ranges of three species, S. guttatus, S. koreanus, and S. lineolatus (Fig. 16.4), stop at the continental margin, at what is known as Wallace’s Line (see below under Oriental region). Australia and southern New Guinea, east of Wallace’s Line, have a Spanish mackerel fauna that consists of four different species: S. multiradiatus, S. semifasciatus, S. queenslandicus, and S. munroi. These four species do not extend into the East Indies or even to the north coast of New Guinea, although they easily could swim that far. This distribution pattern is obviously not simply a result of present ecological factors but instead must be historical, related to the earlier evolution and dispersal of the genus. The present island of New Guinea resulted from the collision of two plates that may have contained two different fish faunas. 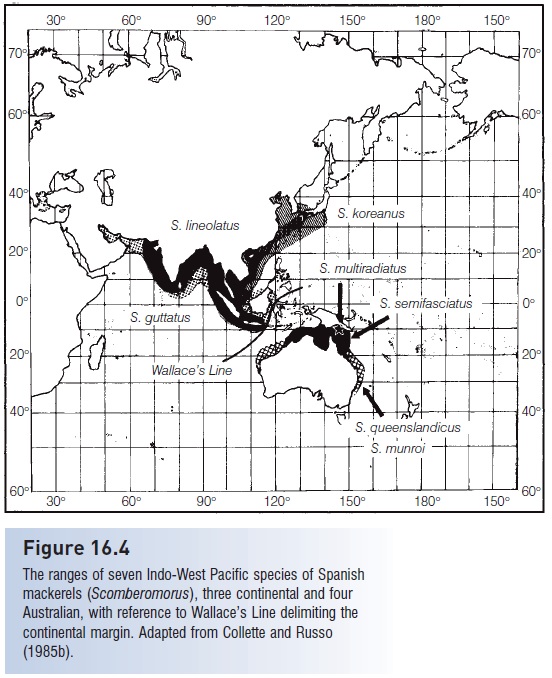