Natural History of an HIV Infection

In the early stages of the infection, the virus appears to replicate at a very low level, and both a transient decrease of total CD4+ cells and a rise in circulating HIV-infected CD4+ T cells may be detected.

Natural History of an HIV Infection

In the early stages of the infection, the virus appears to replicate at a very low level, and both a transient decrease of total CD4+ cells and a rise in circulating HIV-infected CD4+ T cells may be detected. As early as 5–10 days after infection, infectious viral particles, vi-ral mRNA, as well as soluble p24 protein can be detected in the circulation (Fig. 30.2). The concentration of circulating p24 usually peaks 10–20 days after infection and remains de-tectable until seroconversion (i.e., the point of time when free anti-HIV antibody becomes measurable in the patient’s serum). There is anecdotal evidence suggesting that some indi-viduals may completely eliminate the virus from their organisms, particularly children from infected mothers. This, however, seems to be a very exceptional event. 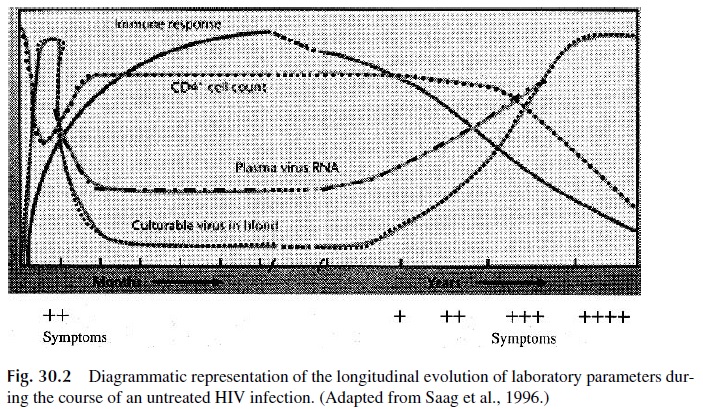 HIV-positive patients remain asymptomatic for variable periods of time, often ex-ceeding 10 –15 years (the average length of the asymptomatic period is currently of 14 years). During that period of time the virus replicates actively, and integrated and soluble viral genomes continue to be detectable by several nucleic acid–amplification techniques (Table 30.5). There is a marked difference between the amount of circulating viral RNA (viral load) and the number of recoverable infectious particles, suggesting either that most infected cells die before viral assembly is completed or that the viral progeny is predomi-nantly constituted by defective particles.

A steady state for CD4+ cells is reached in which the number of dying CD4+ T cells is roughly equivalent to the number of CD4+T cells differentiated in the primary lymphoid tissues.

There is evidence suggesting that the rate of CD4+ cell differentiation does not change during the asymptomatic stages of the disease, but it declines, eventually, when the regenerative capacity of the bone marrow becomes critically impaired as a consequence of the infection of stem cells.

Understanding why some HIV-infected individuals are long-term survivors while others develop AIDS rather swiftly is a major priority in AIDS research. At this point it ap-pears as if both host and microbial factors are involved.

1.            On the host side, the genetic constitution of the individual may be critical. Differ-ences in MHC repertoire and transport-associated proteins are emerging as related to the evolution of HIV infection. For example, it has been found that that the HLA-B*5701 allele is associated with nonprogressive infection. The reason for this is not totally clear, but it may be related to the quality of the immune response elicited by immunogenic peptides presented in association with that particular HLA-B allele. Genetic variants in the chemokine receptor structure have also been linked to the duration of the asymptomatic phase. As a rule, individuals homozy-gous for mutant forms of CCR5 lacking a 32-base-pair segment (CCR5Δ32) re-main free of infection; heterozygous individuals for CCR5Δ32 who become in-fected tend to be slow progressors. Also probably under genetic control is the development of a strong cytotoxic reaction directed against viral-infected cells, a major correlate of long-term survival in most HIV-infected individuals.

2.            The mode of exposure to HIV may also play a significant role. Mucosal expo-sure to low virus loads seems to induce protective CMI at the mucosal level, and the individuals may remain seronegative in spite of repeated exposures.

3.            On the virus side, some long-term survivors seem to be infected by strains of re-duced pathogenicity, which replicate less effectively and are associated with lower viral loads.

All the factors associated with long-term survival have an effect on viral load. Indeed, there is an inverse correlation between the number of HIV-1 RNA copies in plasma and the duration of the asymptomatic period. It has been reported that only 8% of HIV-infected pa-tients with less than 4350 copies of viral RNA/mL of plasma at the time of diagnosis de-veloped AIDS after 5 years of follow-up. In other words, low virus loads are associated with prolonged survival. The monitoring of viral load and CD4+ lymphocyte counts is con-sidered as the best approach for the follow-up of HIV-infected patients (Fig. 30.2), as well as for monitoring the effects of antiretroviral therapy.