The designation of acquired immunodeficiency syndrome (AIDS) is applied when an HIV-positive patient presents one or more of the following features:

The designation of acquired immunodeficiency syndrome (AIDS) is applied when an HIV-positive patient presents one or more of the following features: 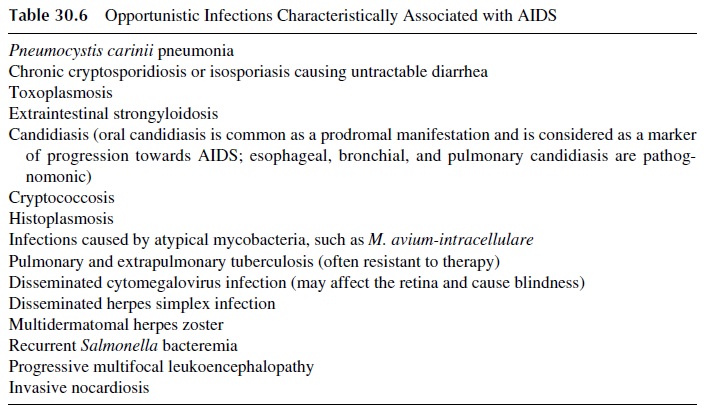 2.            Progressive wasting syndrome (known as “slim disease” in Africa) in adults and failure to thrive in infected infants, probably related to the exaggerated release of TNF (cachectin) by activated macrophages.

3.            Unusually frequent or severe infections not considered as opportunistic, such as recurrent bacterial pneumonia or pulmonary tuberculosis. Recurrent bacterial in-fections are the most common infectious presentation of AIDS in infants and children. In women, recurrent vaginal candidiasis is a very frequent presentation (presenting symptom in 24–71% of the cases, depending on the series).

5.            Neuropsychiatric diseases such as encephalopathy (dementia) and progressive multifocal leukoencephalopathy (due to reactivation of an infection with the Jakob-Creutzfeld (JC) virus) or significant developmental delays or deteriora-tion in children.

The diagnosis of AIDS needs to be supported by evidence of HIV infection, such as positive serological tests, isolation of the virus, or detection of viral genomic material by PCR.