Vertical transmission is a major problem in underdeveloped countries where an-tiretrovirals are not generally available.

By the end of 1999 it was estimated that 34.3 million people had been infected with HIV worldwide, 5.8 million during 1998 alone. Of those new cases, 4 million occurred in austral Africa and 1.2 million cases in South and Southeast Asia, the two hot foci of the epi-demic at this time. During the same period, 21,419 new cases of HIV infection occurred in the United States and Puerto Rico. By the end of 1999, the cumulative figure for AIDS cases in the United States exceeded 730,000, of which about 60% had died. In the United States, the total number of HIV-infected individuals, including those who have and have not yet developed AIDS, is estimated to exceed 370,000. 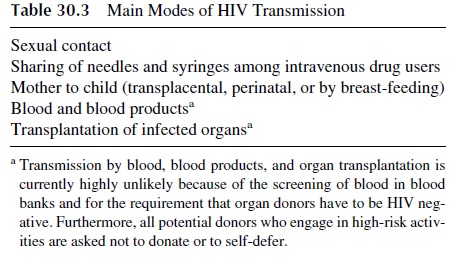 Vertical transmission is a major problem in underdeveloped countries where an-tiretrovirals are not generally available. The infection is most frequently acquired intra-partum (about two thirds of cases). Intrauterine transmission is next in frequency. It usually takes place late in pregnancy, and the infection is acquired either transplacentally or as a consequence of prolonged rupture of the amniotic membranes.