The atria and other tissues of mammals contain a family of pep-tides with natriuretic, diuretic, vasorelaxant, and other properties.

The atria and other tissues of mammals contain a family of pep-tides with natriuretic, diuretic, vasorelaxant, and other properties. The family includes atrial natriuretic peptide (ANP), brain natri-uretic peptide (BNP), and C-type natriuretic peptide (CNP). The peptides share a common 17-amino-acid disulfide ring with vari-able C- and N-terminals (Figure 17–5). A fourth peptide, urodila-tin, has the same structure as ANP with an extension of four amino acids at the N-terminal. 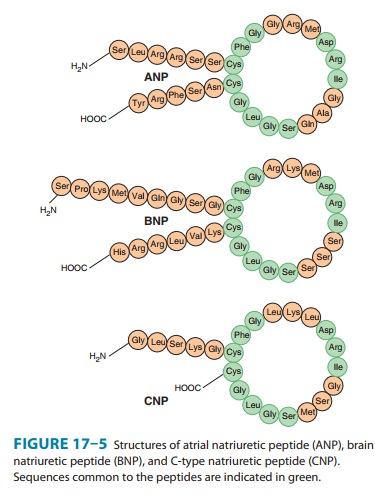 ANP is derived from the carboxyl terminal end of a common precursor termed preproANP. ANP is synthesized primarily in cardiac atrial cells, but it is also synthesized in ventricular myocar-dium, by neurons in the central and peripheral nervous systems, and in the lungs.

The most important stimulus to the release of ANP from the heart is atrial stretch via mechanosensitive ion channels. ANP release is also increased by volume expansion, changing from the standing to the supine position, and exercise. ANP release can also be increased by sympathetic stimulation via α1A adrenoceptors, endothelins via the ETA-receptor subtype , glucocorti-coids, and AVP. Plasma ANP concentration increases in several pathologic states, including heart failure, primary aldosteronism, chronic renal failure, and inappropriate ADH secretion syndrome.

Administration of ANP produces prompt and marked increases in sodium excretion and urine flow. Glomerular filtration rate increases, with little or no change in renal blood flow, so that the filtration fraction increases. The ANP-induced natriuresis is due to both the increase in glomerular filtration rate and a decrease in proximal tubular sodium reabsorption. ANP also inhibits the release of renin, aldosterone, and AVP; these changes may also increase sodium and water excretion. Finally, ANP causes vasodi-lation and decreases arterial blood pressure. Suppression of ANP production or blockade of its action impairs the natriuretic response to volume expansion, and increases blood pressure.

BNP was originally isolated from porcine brain but, like ANP, it is synthesized primarily in the heart. It exists in two forms, hav-ing either 26 or 32 amino acids (Figure 17–5). Like ANP, the release of BNP appears to be volume related; indeed, the two peptides may be co-secreted. BNP exhibits natriuretic, diuretic, and hypotensive activities similar to those of ANP but circulates at a lower concentration.

CNP consists of 22 amino acids (Figure 17–5). It is located predominantly in the central nervous system but is also present in several other tissues including the vascular endothelium, kidneys, and intestine. It has not been found in significant concentrations in the circulation. CNP has less natriuretic and diuretic activity than ANP and BNP but is a potent vasodilator and may play a role in the regulation of peripheral resistance.

Urodilatin is synthesized in the distal tubules of the kidneys by alternative processing of the ANP precursor. It elicits potent natriure-sis and diuresis, and thus functions as a paracrine regulator of sodium and water excretion. It also relaxes vascular smooth muscle.

The biologic actions of the natriuretic peptides are mediated through association with specific high-affinity receptors located on the surface of the target cells. Three receptor subtypes termed ANPA,ANPB, and ANPC(also known as NPR1, NPR2, and NPR3) havebeen identified. The ANPA receptor consists of a 120 kDa mem-brane-spanning protein with enzymatic activity associated with its intracellular domain. Its primary ligands are ANP and BNP. The ANPB receptor is similar in structure to the ANPA receptor, but its primary ligand appears to be CNP. The ANPA and ANPB receptors, but not the ANPC receptor, are guanylyl cyclase enzymes.

The natriuretic peptides have a short half-life in the circula-tion. They are metabolized in the kidneys, liver, and lungs by the neutral endopeptidase NEP 24.11. Inhibition of this endopepti-dase results in increases in circulating levels of the natriuretic peptides, natriuresis, and diuresis. The peptides are also removed from the circulation by binding to ANP C receptors in the vascular endothelium. This receptor binds the natriuretic peptides with equal affinity. The receptor and bound peptide are internalized, the peptide is degraded enzymatically, and the receptor is returned to the cell surface. Patients with heart failure have high plasma levels of ANP and BNP; the latter has emerged as a diagnostic and prognostic marker in this condition.