Inhibition of the Renin-Angiotensin System

In view of the importance of the renin-angiotensin system in car-diovascular disease, considerable effort has been directed to developing drugs that inhibit the system.

INHIBITION OF THE RENIN-ANGIOTENSIN SYSTEM

In view of the importance of the renin-angiotensin system in car-diovascular disease, considerable effort has been directed to developing drugs that inhibit the system. A wide variety of agents that block the formation or action of ANG II is now available. Some of these drugs block renin release, but most inhibit the conversion of ANG I to ANG II, block angiotensin AT1 receptors, or inhibit the enzymatic action of renin.

Several drugs that interfere with the sympathetic nervous system inhibit the release of renin. Examples are clonidine and propranolol. Clonidine inhibits renin release by causing a centrally mediated reduction in renal sympathetic nerve activity, and it may also exert a direct intrarenal action. Propranolol and other β-adrenoceptor– blocking drugs act by blocking the intrarenal and extrarenal β recep-tors involved in the neural control of renin release.

An important class of orally active ACE inhibitors, directed against the active site of ACE, is now extensively used. Captopril and enalapril are examples of the many potent ACEinhibitors that are available. These drugs differ in their structure and pharmacokinetics, but they are interchangeable in clinical use. ACE inhibitors decrease systemic vascular resistance without increasing heart rate, and they promote natriuresis. As described, they are effective in the treatment of hypertension, decrease morbidity and mortality in heart failure and left ventricular dysfunction after myocardial infarction, and delay the progression of diabetic nephropathy.

ACE inhibitors not only block the conversion of ANG I to ANG II but also inhibit the degradation of other substances, including bradykinin, substance P, and enkephalins. The action of ACE inhibitors to inhibit bradykinin metabolism contributes significantly to their hypotensive action (see Figure 11–5) and is apparently responsible for some adverse side effects, including cough and angioedema. These drugs are contraindicated in preg-nancy because they cause fetal kidney damage.

Potent peptide antagonists of the action of ANG II are available for research use. The best-known of these is the partial agonist, saralasin. Saralasin lowers blood pressure in hypertensive patientsbut may elicit pressor responses, particularly when circulating ANG II levels are low. Because it must be administered intrave-nously, saralasin is used only for investigation of renin-dependent hypertension and other hyperreninemic states.

The nonpeptide ANG II receptor blockers (ARBs) are of much greater interest. Losartan, valsartan, eprosartan, irbesartan,candesartan, olmesartan, and telmisartan are orally active,potent, and specific competitive antagonists of angiotensin AT1 receptors. The efficacy of these drugs in hypertension is similar to that of ACE inhibitors, but they are associated with a lower inci-dence of cough. Like ACE inhibitors, ARBs slow the progression of diabetic nephropathy and valsartan has been reported to decrease the incidence of diabetes in patients with impaired glu-cose tolerance. The antagonists are also effective in the treatment of heart failure and provide a useful alternative when ACE inhibi-tors are not well tolerated. ARBs are generally well tolerated but should not be used by patients with nondiabetic renal disease or in pregnancy Marfan syndrome is a connective tissue disorder associated with aortic disease and other abnormalities involving increased transforming growth factor (TGF)-β signaling. Since ANG II increases TGF-β levels, it was reasoned that blockade of the renin-angiotensin system might be beneficial in Marfan syndrome. Promising initial results have been obtained with losartan, and clinical trials are underway.

The currently available ARBs are selective for the AT1 receptor. Since prolonged treatment with the drugs disinhibits renin release and increases circulating ANG II levels, there may be increased stimulation of AT2 receptors. This may be significant in view of the evidence that activation of the AT2 receptor causes vasodila-tion and other beneficial effects. AT2 receptor antagonists such as PD 123177 are available for research but have no clinical applica-tions at this time. However, a selective AT2agonist, compound 21, lowers blood pressure in hypertensive animals and may be benefi-cial in human hypertension. The clinical benefits of ARBs are similar to those of ACE inhibitors, and it is not clear if one group of drugs has significant advantages over the other. Combination therapy with an ACE inhibitor plus an ARB has a number of potential advantages and is currently being investigated.

Cleavage of angiotensinogen by renin (Figures 17–1 and 17–3) is the rate-limiting step in the formation of ANG II and thus repre-sents a logical target for inhibition of the renin-angiotensin system. Drugs that inhibit renin have been available for many years but have been limited by low potency, poor bioavailability, and short dura-tion of action. However, a new class of nonpeptide, low-molecular-weight, orally active inhibitors has recently been developed. 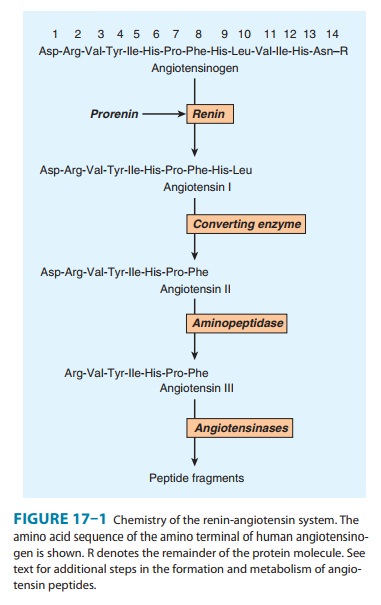 Aliskiren is the most advanced of these and the first to beapproved for the treatment of hypertension. In healthy subjects, aliskiren produces a dose-dependent reduction in plasma renin activity and ANG I and II and aldosterone concentrations. In patients with hypertension, many of whom have elevated plasma renin levels, aliskiren suppresses plasma renin activity and causes dose-related reductions in blood pressure similar to those pro-duced by ACE inhibitors and ARBs. The safety and tolerability of aliskiren appear to be comparable to angiotensin antagonists and placebo. Aliskiren is contraindicated in pregnancy. 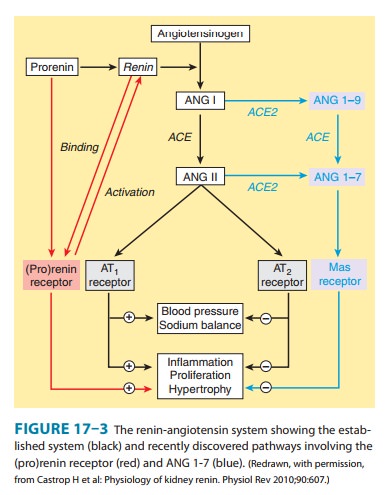 Inhibition of the renin-angiotensin system with ACE inhibitors or ARBs may be incomplete because the drugs disrupt the negative feedback action of ANG II on renin release and thereby increase plasma renin activity. Other antihypertensive drugs, notably hydro-chlorothiazide and other diuretics, also increase plasma renin activ-ity. Aliskiren not only decreases baseline plasma renin activity in hypertensive subjects but also eliminates the rise produced by ACE inhibitors, ARBs, and diuretics and thereby results in a greater anti-hypertensive effect. Renin inhibition has thus proved to be an important new approach to the treatment of hypertension.

For many years, prorenin was considered to be an inactive pre-cursor of renin, with no function of its own. Thus the observationnoted above in the section on renin that prorenin circulates at high levels was surprising. Recently, however, a receptor that preferentially binds prorenin has been identified. Since it also binds active renin, the receptor is referred to as the (pro)renin receptor.

The receptor is a 350-amino acid protein with a single trans-membrane domain. When prorenin binds to the (pro)renin receptor, it undergoes a conformational change and becomes fully active. The catalytic activity of active renin also increases further when it binds to the receptor. The activated prorenin and renin interact with circulating angiotensinogen to form angio-tensin (Figure 17–3). However, binding of prorenin to the recep-tor also activates intracellular signaling pathways that differ depending on the cell type. For example, in mesangial and vas-cular smooth muscle cells, prorenin binding activates MAP kinases and expression of profibrotic molecules. Thus, elevated prorenin levels (as occur, for example, in diabetes mellitus) could produce a variety of adverse effects via both angiotensin-depen-dent and independent pathways. Recent research indicates that the (pro)renin receptor is functionally linked to the vacuolar proton-ATPase (ATP6ap2) and is necessary for Wnt signaling pathways involved (independently of renin) in stem cell biology, embryology, and cancer.

A synthetic peptide named handle region peptide (HRP), which consists of the amino acid sequence corresponding to the “handle” region of the prorenin prosegment, has been synthesized and shown to competitively inhibit binding of prorenin to the (pro)renin receptor. HRP has beneficial effects in the kidneys of diabetic rats and there is considerable inter-est in developing noncompetitive antagonists of the (pro)renin receptor.

This novel receptor could be important in cardiovascular and other diseases, but at the present time its role in human pathology is far from clear.