The endothelin system can be blocked with receptor antagonists and drugs that block endothelin-converting enzyme.

Bosentan is a nonselective receptor blocker. It is active orally,and blocks both the initial transient depressor (ETB) and the pro-longed pressor (ETA) responses to intravenous endothelin. Many orally active endothelin receptor antagonists with increased selec-tivity have been developed and are available for research use. Examples include the selective ETA antagonists ambrisentan, which has been approved by the Food and Drug Administration to treat pulmonary artery hypertension, and sitaxsentan. 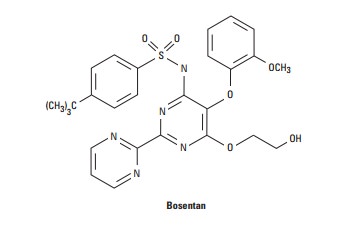 Systemic administration of endothelin receptor antagonists or endothelin-converting enzyme inhibitors causes vasodilation and decreases arterial pressure in humans and experimental animals. Intra-arterial administration of the drugs also causes slow-onset forearm vasodilation in humans. These observations provide evidence that the endothelin system participates in the regulation of vascular tone, even under resting conditions. The activity of the system is higher in males than in females. It increases with age, an effect that can be counteracted by regular aerobic exercise.

Endothelin antagonists have considerable potential for the treatment of these diseases. Indeed, endothelin antagonism with bosentan, sitaxsentan, and ambrisentan has proved to be a moderately effective and generally well-tolerated treatment for patients with pulmonary arterial hypertension, an important condition with few effective treatments. Other promising targets for these drugs are resistant hypertension, chronic renal disease, connective tissue disease, and subarachnoid hemorrhage. On the other hand, clinical trials of the drugs in the treatment of congestive heart failure have been disappointing.

Endothelin antagonists occasionally cause systemic hypotension, increased heart rate, facial flushing or edema, and headaches. Potential gastrointestinal effects include nausea, vomiting, andconstipation. Because of their teratogenic effects, endothelin antag-onists are contraindicated in pregnancy. Bosentan has been associated with fatal hepatotoxicity, and patients taking this drug must have monthly liver function tests. Negative pregnancy test results are required for women of child-bearing age to take this drug.