The endothelium is the source of a variety of substances with vasodilator (PGI2 and nitric oxide) and vasoconstrictor activities.

The endothelium is the source of a variety of substances with vasodilator (PGI2 and nitric oxide) and vasoconstrictor activities. The latter include the endothelin family, potent vasoconstrictor peptides that were first isolated from aortic endothelial cells.

Three isoforms of endothelin have been identified: the originally described endothelin, ET-1, and two similar peptides, ET-2 and ET-3. Each isoform is a product of a different gene and is synthe-sized as a prepro form that is processed to a propeptide and then to the mature peptide. Processing to the mature peptides occurs through the action of endothelin-converting enzyme. Each endothelin is a 21-amino-acid peptide containing two disulfide bridges. The structure of ET-1 is shown in Figure 17–6.

Endothelins are widely distributed in the body. ET-1 is the predominant endothelin secreted by the vascular endothelium. It is also produced by neurons and astrocytes in the central nervous system and in endometrial, renal mesangial, Sertoli, breast epithe-lial, and other cells. ET-2 is produced predominantly in the kid-neys and intestine, whereas ET-3 is found in highest concentration 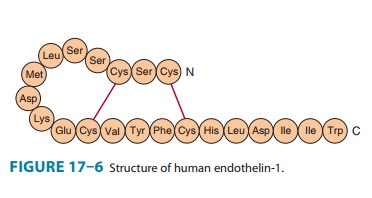 in the brain but is also present in the gastrointestinal tract, lungs, and kidneys. Endothelins are present in the blood but in low con-centration; they apparently act locally in a paracrine or autocrine fashion rather than as circulating hormones.

The expression of the ET-1 gene is increased by growth factors and cytokines, including transforming growth factor-β (TGF-β) and interleukin 1 (IL-1), vasoactive substances including ANG II and AVP, and mechanical stress. Expression is inhibited by nitric oxide, prostacyclin, and ANP.

Clearance of endothelins from the circulation is rapid and involves both enzymatic degradation by NEP 24.11 and clearance by the ETB receptor.

Endothelins exert widespread actions in the body. In particular, they cause potent dose-dependent vasoconstriction in most vascu-lar beds. Intravenous administration of ET-1 causes a rapid and transient decrease in arterial blood pressure followed by a sus-tained increase. The depressor response results from release of prostacyclin and nitric oxide from the vascular endothelium, whereas the pressor response is due to direct contraction of vascu-lar smooth muscle. Endothelins also exert direct positive inotropic and chronotropic actions on the heart and are potent coronary vasoconstrictors. They act on the kidneys to cause vasoconstric-tion and decrease glomerular filtration rate and sodium and water excretion. In the respiratory system, they cause potent contraction of tracheal and bronchial smooth muscle. Endothelins interact with several endocrine systems, increasing the secretion of renin, aldosterone, AVP, and ANP. They exert a variety of actions on the central and peripheral nervous systems, the gastrointestinal sys-tem, the liver, the urinary tract, the male and female reproductive systems, the eye, the skeletal system, and the skin. Finally, ET-1 is a potent mitogen for vascular smooth muscle cells, cardiac myo-cytes, and glomerular mesangial cells. 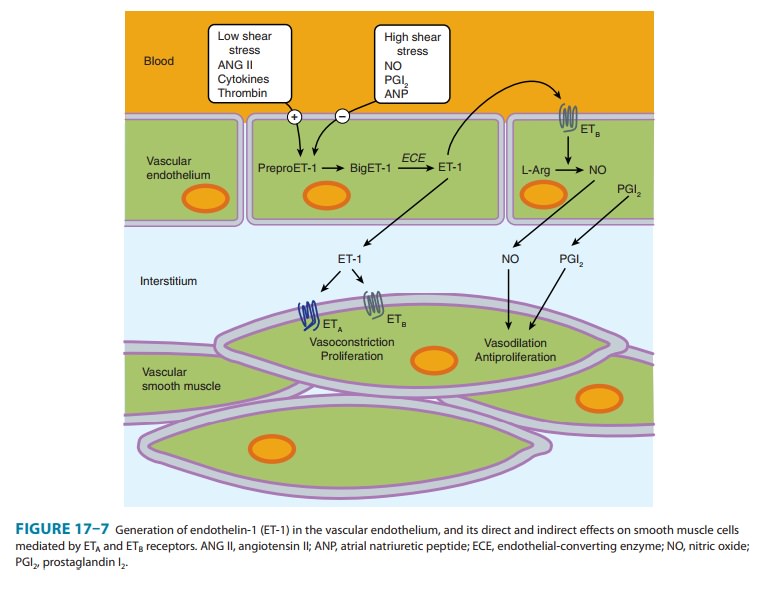 Endothelin receptors are widespread in the body. Two endothe-lin receptor subtypes, termed ETA and ETB, have been cloned and sequenced. ETA receptors have a high affinity for ET-1 and a low affinity for ET-3 and are located on smooth muscle cells, where they mediate vasoconstriction (Figure 17–7). ETB receptors have approximately equal affinities for ET-1 and ET-3 and are primar-ily located on vascular endothelial cells, where they mediate release of PGI2 and nitric oxide. Some ETB receptors are also present on smooth muscle cells and mediate vasoconstriction. Both receptor subtypes belong to the G protein-coupled seven-transmembrane domain family of receptors.

The signal transduction mechanisms triggered by binding of ET-1 to its vascular receptors include stimulation of phospholipase C, formation of inositol trisphosphate, and release of calcium from the endoplasmic reticulum, which results in vasoconstriction. Conversely, stimulation of PGI2 and nitric oxide synthesis results in decreased intracellular calcium concentration and vasodilation.