There are several forms of muscular dystrophy. These diseases result in the wasting away of muscle tissue and cause premature death, usually in the late teens or early 20s.

There are several forms of muscular dystrophy. These diseases result in the wasting away of muscle tissue and cause premature death, usually in the late teens or early 20s. There is no known cure. The most common form, Duchenne’s muscular dystrophy, is due to defects in the protein dystrophin, which plays a role in attaching the internal muscle fibrils to the membranes of muscle cells (Fig. 16.11). 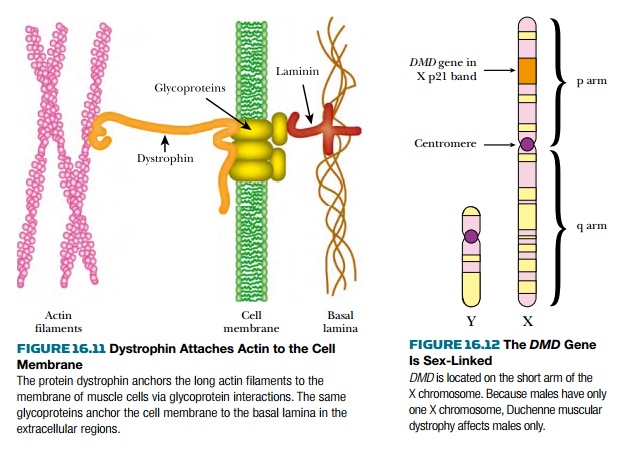 If the single copy of a sex-linked gene present in a male is defective, there is no backup copy and severe symptoms may result. In contrast, females with just one defective copy will usually have no symptoms, but they will be carriers and half of their male children will get the disease. The result is a pattern of inheritance in which only the male members of a family suffer from the disease. Figure 16.13 shows a family with several occurrences of an X-linked recessive disease. About two-thirds of Duchenne’s muscular dystrophy patients inherit the disease from their mothers and the other third get it as the result of new mutations, which arise at a frequency of approximately 1 in 10,000 gametes. 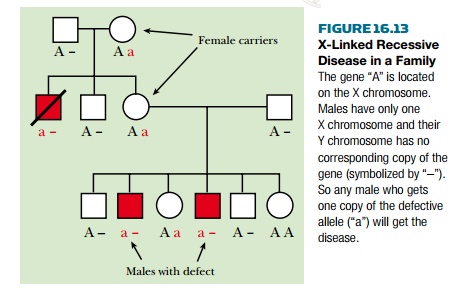 The DMD gene is even odder than the cystic fibrosis gene. It takes up about 1.5% of the length of the X chromosome and is longer than the entire genomes of some bacteria. The DMD gene has roughly 75 exons and more than 2 million base pairs of DNA, of which less than 1% are used to encode the protein. Despite this the encoded protein, dystrophin, is gigantic. It has 4000 amino acids, so it is roughly 10 times as large as an average protein. Such huge coding sequences are bigger targets for detrimental mutations, which explains why the mutation rate for the DMD gene is more than 10 times greater than for typical human genes. In most victims the defect is due to alterations in just one or a few bases of the DMD gene. However, about 10% of the victims have a deletion of DNA, which includes all or part of the DMD gene.

One Duchenne’s muscular dystrophy patient had a deletion large enough to locate to the Xp21 region of the X chromosome using a light microscope. Using the subtractive hybridization method, DNA from this patient was used to clone the DNA that was missing in the deletion. In this approach, the DMD gene to be cloned is present in the DNA from a healthy person. The sample of DNA with the DMD deletion is used to remove other, unwanted, genes from the healthy DNA, by hybridization. This leaves behind the healthy copy of the DMD gene, which is then cloned onto a suitable vector for further analysis.