If the DNA of a single-celled organism is mutated, the mutation will be passed on to all of its descendants when it divides.

If the DNA of a single-celled organism is mutated, the mutation will be passed on to all of its descendants when it divides. The situation in multicelled creatures is more complex. In animals, the germline cells are reserved for reproductive purposes and give rise to the eggs and sperm in mature adults. The somatic cells forming the rest of the body are not passed on to the next generation. However, mutation of somatic cells is involved in cancer. 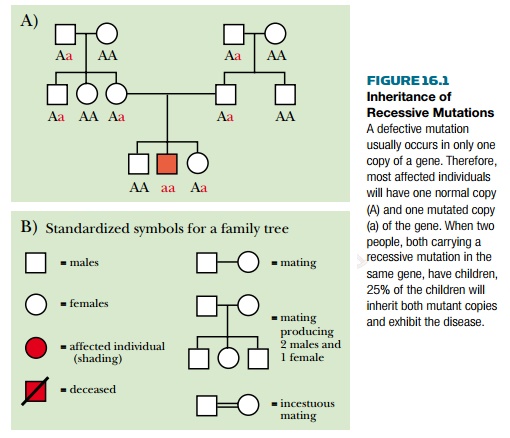 Higher organisms such as animals and plants are normally diploid and have two copies (i.e., two alleles) of each gene. Therefore, if one copy is damaged by a mutation, the other copy can compensate for the loss. Because most mutations are relatively rare, it is unlikely that both alleles of the same gene will carry mutations. Furthermore, most detrimental mutations are recessive to the wild type (Fig. 16.1 and Table 16.1). That is, a single functional allele is sufficient for normal growth and the defective copy has no noticeable effect on the phenotype.

Nonetheless, we humans all have quite a few mutations randomly scattered among our 25,000 genes. Obviously, close relatives tend to share many defects. Individuals share half of their genetic information with their brothers, sisters, father, and mother, although, of course, not the same half with each of them. Therefore, a child from the mating of close relatives (for example, as in brother/sister or father/ daughter), has a much increased chance of getting two copies of the same defect, that is of being homozygous for the recessive allele (Fig. 16.2). 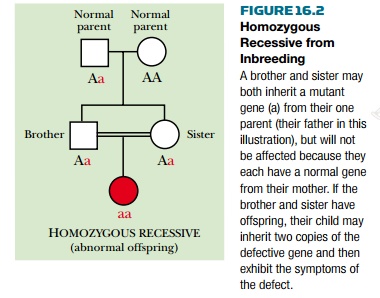 Mating between close relatives, even cousins, makes genetic disease more likely. This is because a rare recessive allele present in one ancestor may be passed down both sides of the family and two copies may end up in one particular child. In Europe, royal families insisted that their children marry other royalty; therefore, many marriages were between closely related individuals. This led to a high incidence of defects among the offspring, the best known being hemophilia. In marriages between unrelated people, recessive diseases will only affect the children if by chance an ancestor from each side of the family carried a copy of the defective allele. This is the underlying reason for the taboos against incest, which prevail in most societies, though the degree of forbidden relationships varies considerably between different cultures.

Many genetic defects are fatal to sperm cells, fertilized eggs, or early embryos so they are never seen in adults. Nevertheless, a wide range of genetic defects has been observed in living humans. Some of the most common defects due to a single gene are listed in Table 16.1. Unless otherwise noted, they are recessive and require both alleles to be defective for symptoms to appear. Large genes are bigger targets for random mutation. The genes responsible for cystic fibrosis, muscular dystrophy, and phenylketonuria are all abnormally large and all three genetic defects are relatively common. 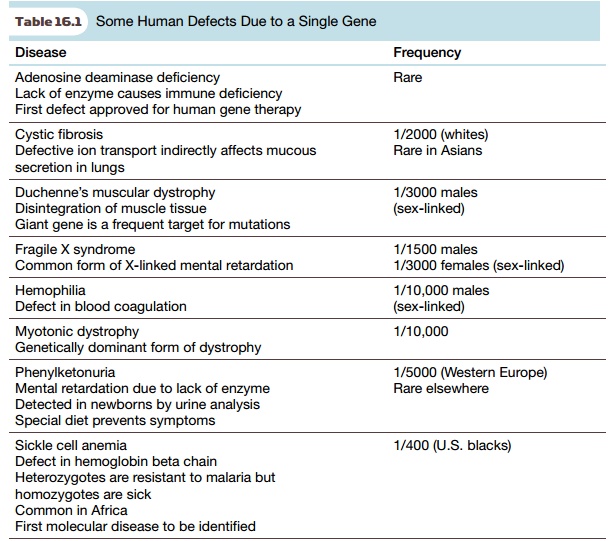