Dominant Mutations May Be Positive or Negative

Occasionally a mutation causes a change of function or even a gain of function in the resulting gene product.

DOMINANT MUTATIONS MAY BE POSITIVE OR NEGATIVE

Occasionally a mutation causes a change of function or even a gain of function in the resulting gene product. In this case, a single mutant copy of the gene may cause significant phenotypic effects—that is, the mutation is dominant. Gain-of-function mutations are relatively rare in inherited disease but are frequent in the somatic mutations that cause cancer.

Gain-of-function mutations are much more specific than those causing loss of function. For example, achondroplasia, or short-limbed dwarfism, is due to mutation of a single copy of the FGFR3 gene that encodes fibroblast growth factor (FGF) receptor #3. FGF receptors are signal-transducing proteins, that is, they receive signals at the cell membrane and transmit the information to the nucleus. Normally they are activated only when they receive a signal from outside the cell (i.e., bind FGF). Although most mutations inactivate the receptor, a few extremely rare mutations yield receptors that are active despite the absence of an external signal. Only mutations that cause the replacement of the amino acid glycine at position 380 with  arginine (Gly380Arg) cause achondroplasia. Other mutations in this gene cause other symptoms.

The simplest scenario for a dominant negative mutation is where the affected protein forms oligomers. If a mutation blocks protein synthesis in one copy, there will simply be a 50% reduction in the amount of protein. However, if the mutant allele produces an altered protein, this may bind to normal copies of the same protein and give inactive complexes.

The final result may be that almost no active protein is available (Fig. 16.3). Many transcription factors bind to DNA as dimers and are susceptible to dominant negative effects. Proteins that form ion channels are also liable to dominant negative effects. Cardiac arrhythmia (Romano-Ward syndrome) is due to a dominant mutation in the KVLQT1 gene. This encodes a protein that assembles with others to form a transmembrane potassium channel. Certain defective KVLQT1 proteins can still bind as part of the assembly but block the operation of the channel. About 20% remaining activity is seen in this syndrome. 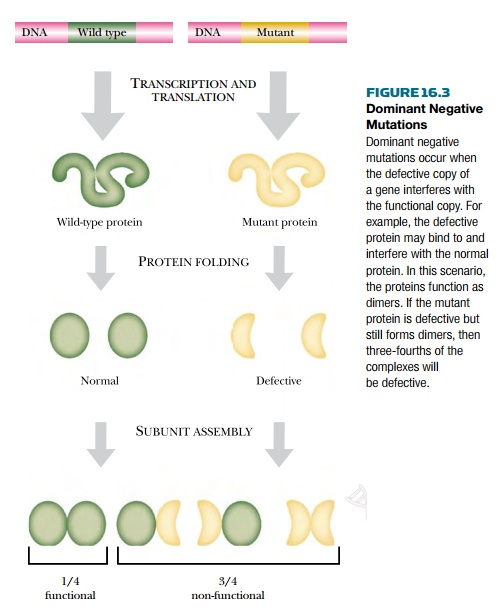