The indexing schemes we have described thus far involve an ordered index file.

The indexing schemes we have described thus far involve an ordered index file. A binary search is applied to the index to locate pointers to a disk block or to a record (or records) in the file having a specific index field value. A binary search requires approximately (log2bi) block accesses for an index with bi blocks because each step of the algorithm reduces the part of the index file that we continue to search by a factor of 2. This is why we take the log function to the base 2. The idea behind a multilevel index is to reduce the part of the index that we continue to search by bfri, the blocking factor for the index, which is larger than 2. Hence, the search space is reduced much faster. The value bfri is called the fan-out of the multilevel index, and we will refer to it by the symbol fo. Whereas we divide the record search space into two halves at each step during a binary search, we divide it n-ways (where n = the fan-out) at each search step using the multilevel index. Searching a multilevel index requires approximately (logfobi) block accesses, which is a substantially smaller number than for a binary search if the fan-out is larger than 2. In most cases, the fan-out is much larger than 2.

We can repeat this process for the second level. The third level, which is a primary index for the second level, has an entry for each second-level block, so the number of third-level entries is r3 = (r2/fo) . Notice that we require a second level only if the first level needs more than one block of disk storage, and, similarly, we require a third level only if the second level needs more than one block. We can repeat the preceding process until all the entries of some index level t fit in a single block. This block at the tth level is called the top index level.4 Each level reduces the number of entries at the previous level by a factor of fo—the index fan-out—so we can use the formula 1 ≤ (r1/((fo)t)) to calculate t. Hence, a multilevel index with r1 first-level entries will have approximately t levels, where t = (logfo(r1)) . When searching the index, a single disk block is retrieved at each level. Hence, t disk blocks are accessed for an index search, where t is the number of index levels.

The multilevel scheme described here can be used on any type of index—whether it is primary, clustering, or secondary—as long as the first-level index has distinct val-ues for K(i) and fixed-length entries. Figure 18.6 shows a multilevel index built over a primary index. Example 3 illustrates the improvement in number of blocks accessed when a multilevel index is used to search for a record.

Example 3. Suppose that the dense secondary index of Example 2 is converted into a multilevel index. We calculated the index blocking factor bfri = 68 index entries per block, which is also the fan-out fo for the multilevel index; the number of first-level blocks b1 = 442 blocks was also calculated. The number of second-level blocks will be b2 = (b1/fo) = (442/68) = 7 blocks, and the number of third-level blocks will be b3 = (b2/fo) = (7/68) = 1 block. Hence, the third level is the top level of the index, and t = 3. To access a record by searching the multilevel index, we must access one block at each level plus one block from the data file, so we need t + 1 = 3 + 1 = 4 block accesses. Compare this to Example 2, where 10 block accesses were needed when a single-level index and binary search were used.

Notice that we could also have a multilevel primary index, which would be non-dense. Exercise 18.18(c) illustrates this case, where we must access the data block from the file before we can determine whether the record being searched for is in the file. For a dense index, this can be determined by accessing the first index level (without having to access a data block), since there is an index entry for every record in the file.

A common file organization used in business data processing is an ordered file with a multilevel primary index on its ordering key field. Such an organization is called an indexed sequential file and was used in a large number of early IBM systems. IBM’s ISAM organization incorporates a two-level index that is closely related to the organization of the disk in terms of cylinders and tracks (see Section 17.2.1). The first level is a cylinder index, which has the key value of an anchor record for each cylinder of a disk pack occupied by the file and a pointer to the track index for the cylinder. The track index has the key value of an anchor record for each track in the cylinder and a pointer to the track. The track can then be searched sequentially for the desired record or block. Insertion is handled by some form of overflow file that is merged periodically with the data file. The index is recreated during file reorganization.

Algorithm 18.1 outlines the search procedure for a record in a data file that uses a nondense multilevel primary index with t levels. We refer to entry i at level j of the index as <Kj(i), Pj(i)>, and we search for a record whose primary key value is K. We assume that any overflow records are ignored. If the record is in the file, there must be some entry at level 1 with K1(i) f K < K1(i + 1) and the record will be in the block of the data file whose address is P1(i). Exercise 18.23 discusses modifying the search algorithm for other types of indexes. 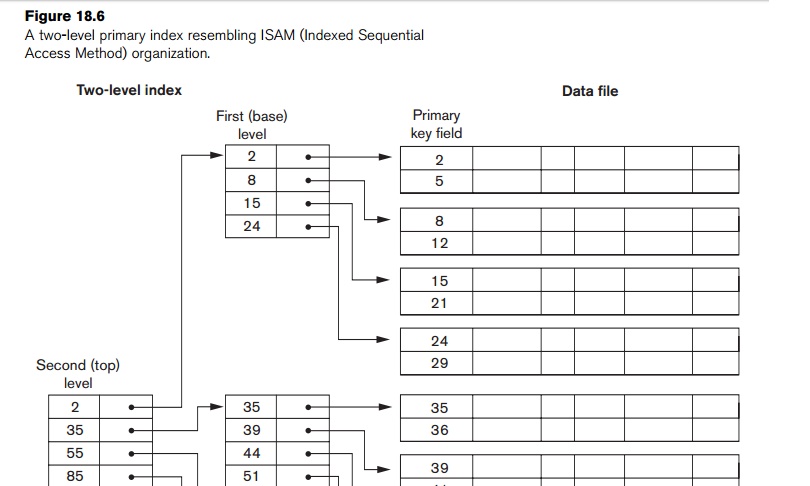 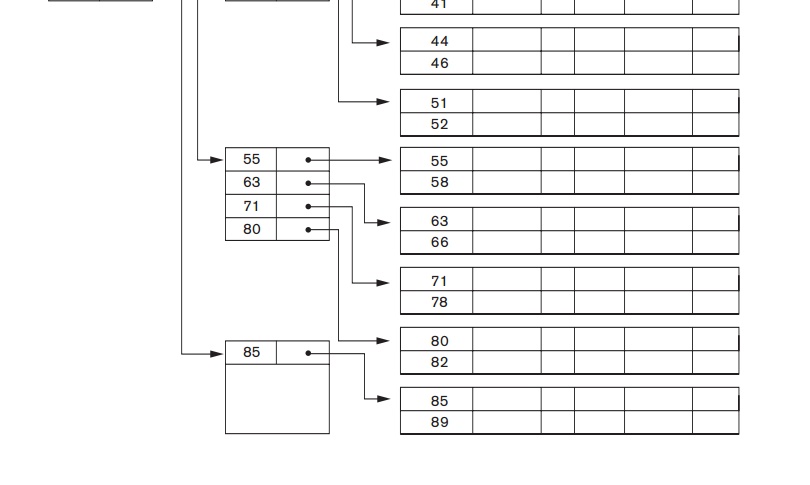 (* We assume the index entry to be a block anchor that is the first key per block. *) p ← address of top-level block of index;

As we have seen, a multilevel index reduces the number of blocks accessed when searching for a record, given its indexing field value. We are still faced with the problems of dealing with index insertions and deletions, because all index levels are physically ordered files. To retain the benefits of using multilevel indexing while reducing index insertion and deletion problems, designers adopted a multilevel index called a dynamic multilevel index that leaves some space in each of its blocks for inserting new entries and uses appropriate insertion/deletion algorithms for creating and deleting new index blocks when the data file grows and shrinks. It is often implemented by using data structures called B-trees and B+-trees, which we describe in the next section.