Morphology of the Leaf

Morphology means external, well visible structural features whereas anatomy needs tools like a microscope and/or scalpel. Leaves are very important in plant morphology. The ability to describe the leaf is a must even for novices in botany.

Morphology of the Leaf

Morphology means external, well visible structural features whereas anatomy needs tools like a microscope and/or scalpel. Leaves are very important in plant morphology. The ability to describe the leaf is a must even for novices in botany. 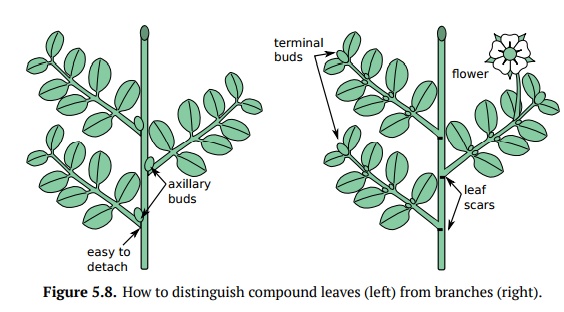 In all, plants are fractal organisms, like Sierpinski triange (Fig. 5.9). All fractals are self-similar (Fig. 5.10), and plants are no exception. Self-similarity, or “Rus-sian doll effect” means that almost every part of plant may be a part of the bigger complex, this bigger one—the part of even bigger system, and so on. This is what we see in leaves as levels of hierarchy. Simple leaves have just one level of hierar-chy whereas compound leaves have two or more levels of hierarchy. Compoundleaves are sometimes mixed with branches but there are many other character-istics which allow to distinguish them (Fig. 5.8).

...” As it was mentioned above, leaf hierarchy is similar to Russian dolls: every smaller doll has a bigger doll (next hierarchy level) outside. For example, if the leaf is compound (consists of multiple leaflets), the overall shape of it could be, saying, round (circular) but the shape of individual leaflet of the very same leaf could be ovate (Fig. 5.11). As a result, the description will say that on first level of hierarchy the leaf is ovate, and on the third level—circular.

General characters of leaf include stipules and other structures located near leaf base (Fig. 5.12): sheath (typical for grasses and other liliids) and ocrea (typical for buckwheat family, Polygonaceae). 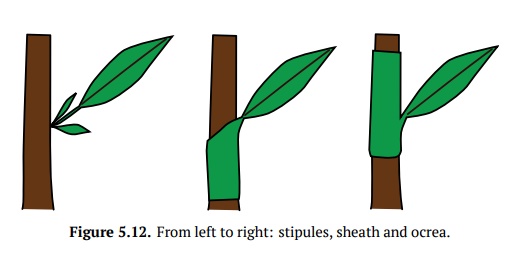 Repetitive characters are the shape of the leaf (Fig. 5.13), leaf dissection, and whether the blade is stalked (has petiole) or not. 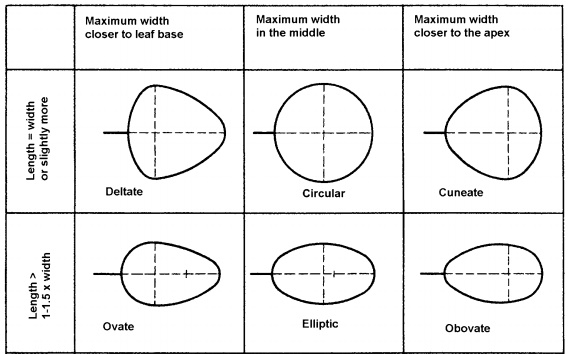 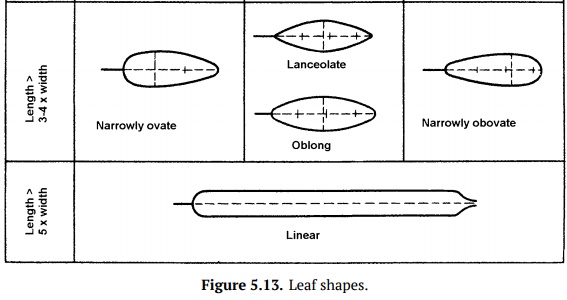 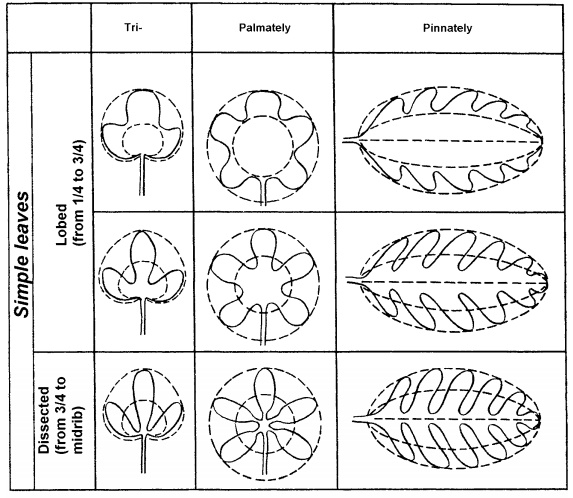 Terminal characters are applicable only to terminal leaflets of leaves. These characters (Fig. 5.15) are the shape of the leaf blade base, the leaf tip, the type of margin, the surface, and the venation. The base of the leaf blade could be rounded, truncate (straight), cuneate, and cordate. The leaf apex could berounded, mucronate, acute, obtuse, and acuminate. Leaf margin variants are entire (smooth) and toothed: dentate, serrate, double serrate and crenate. 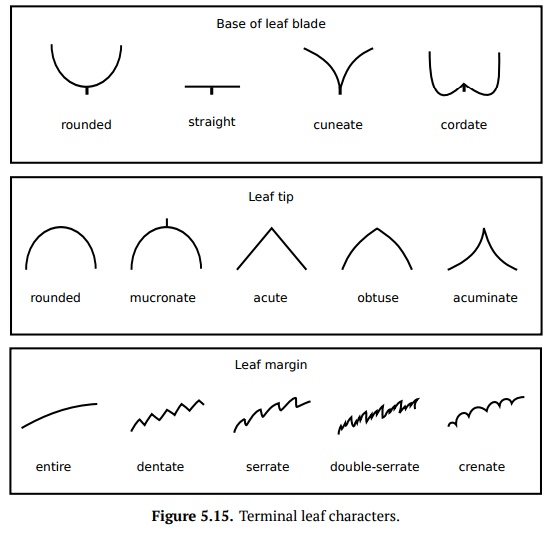 Leaf veins are vascular bundles coming to the leaf from stem. Frequently, there is a main vein and lateral veins (veins of second order). There are multiple classifications of leaf venation; and example is shown on the table below: 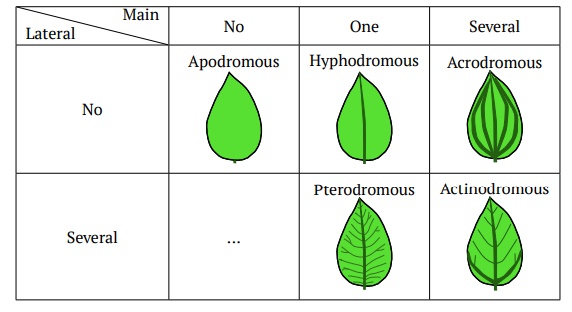 An important type of venation which is absent from this table, is dichotomous. It is similar to acrodromous (there is no main vein but many lateral) but more promitive. Each vein divides into two similar parts which is known as dichoto-mous branching. The example of dichotomous venation is the leaf of maidenhair tree, ginkgo (Ginkgo biloba). Another frequently segregated type of venation is parallellodromous, in essence, this is acrodromous venation in linear leaves(for example, leaves of grasses): most of veins are almost parallel.

To characterize the whole leaf, one might use the following plan:

Heterophylly refers to a plant having more than one kind of leaf. A plant canhave both juvenile leaves and adult leaves, water leaves and air leaves, or sun leaves and shade leaves. A leaf mosaics refers to the distribution of leaves in a single plane perpendicular to light rays, this provides the least amount of shad-ing for each leaf.

Leaves have seasonal lives; they arise from the SAM through leaf primordia, and grow via marginal meristems. The old leaves separate from the plant with an abscission zone.

The famous poet and writer Johann Wolfgang Goethe is also considered a founder of plant morphology. He is invented an idea of a “primordial plant” which he called “Urpflanze” where all organs were modifications of several primordial ones. In accordance to Goethe’s ideas, plant morphology considers that many visible plant parts are just modifications of basic plant organs.

Modifications of the leaf include spines or scales for defense, tendrils for sup-port, traps, “sticky tapes”, or urns for interactions (in that case, catching in-sects), plantlets for expansion, and succulent leaves for storage. Plantlets are little mini plants that grow on the main plant and then fall off and grow into new plants; the most known example is Kalanchoë (“mother of thousands”) which frequently uses plantlets to reproduce. Plants that have insect traps of various kinds are called carnivorous plants (in fact, they are still photoautotrophs and use insect bodied only as fertilizer). Several types of these are the cobra lily (Dar-lingtonia), various pitcher plants (Nepenthes, Cephalotus, Sarracenia), the butter-wort (Utricularia), the sundew (Drosera), and the best known, the Venus flytrap (Dionaea).