Why did plants go on land? In order to escape competition with other plants for resources like the sun and nutrients, but also to obtain much more sunlight that was otherwise seriously reduced underwater.

Why did plants go on land? In order to escape competition with other plants for resources like the sun and nutrients, but also to obtain much more sunlight that was otherwise seriously reduced underwater. The move to land also helped plants escape predators. Lastly, plants benefited from this change because they escaped from the temperature-gases conflict: warmer temperatures are good for organisms but significantly decrease the amount of gases diluted in water.

Although this action solved several problems, it also raised new issues that needed to be dealt with. The most important was the risk of drying out. To com-bat this, plants developed their first tissue: epidermis covered with a cuticle which served a purpose similar to a plastic bag. But since they need to exchange gases, they developed stomata which served as a regulated pore system. The remaining cells became second tissue: parenchyma (or ground tissue). 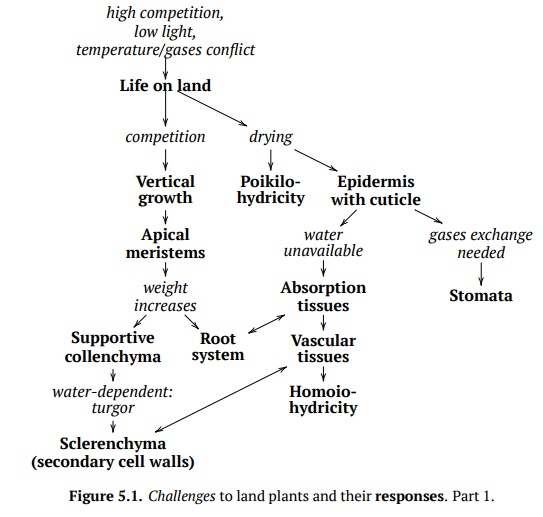 Another response (Fig. 5.1) for drying was a development of poikilohydricity (see below), the ability to hibernate in (almost) dried condition. As hibernation is generally dangerous since it requires “system restart”, that evolutionary route did not become the main.Tissue is a union of cells which have common origin, function and similar mor-phology. Tissues belong to organs: organ is a union of different tissues which have common function(s) and origin. Plants have simple and complex tissues. The simple tissues are composed of the same type of cells; complex tissues are composed of more than one type of cell, these are unique to plants. 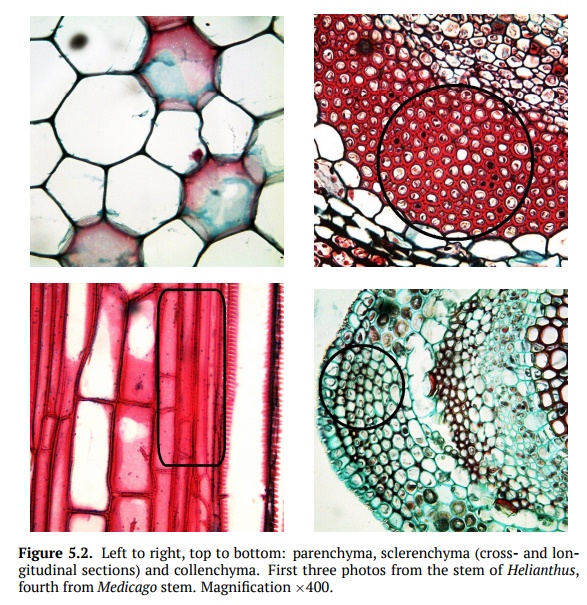 Parenchyma (Fig.5.2)are spherical, elongated cells with a thin primary cellwall. It is a main component of young plant organs. The basic functions of pa-renchyma are photosynthesis and storage. Parenchyma cells are widespread in plant body. They fill the leaf, frequent in stem cortex and pith and is a compo-nent of complex vascular tissues (see below). Contrary to parenchyma (which is a simple tissue), epidermis is a complex tissue composed of epidermal and stomata cells. Its main functions are transpiration, gas exchange and defense. As it seen here, plants acquired tissues in a way radically different from animals: while plants regulate gas and water exchange in response to terrestrial environ-ment, animals actively hunt for food (using kinoblast tissues) and then digest it (with pagocytoblast tissue).