One of the methods in controlling wild spawning of tilapias is mono-sex culture, and since the male tilapia grows faster and attains a larger size, interest has been focused on producing all-male seed stock.

One of the methods in controlling wild spawning of tilapias is mono-sex culture, and since the male tilapia grows faster and attains a larger size, interest has been focused on producing all-male seed stock. Obviously the simplest means is to sort out males from unsorted stocks of fry, commonly known among fish culturists as hand sexing (or manual sexing). The sexes can be distinguished by visual examination of the urino-genital papillae. In the females, the papilla has two orifices whereas the male has only one. Often the female has a smaller genital papilla. This requires some skill and carefulness and can be done reliably only with fingerlings of 20–50 g size. Even at this size, there is likely to be a certain percentage of error in sorting, and even a small number of females in the stock can initiate wild spawning in production ponds. It also involves waste of female fish, although some farmers use the sorted females for preparing feeds for males to be grown to market size. Despite the skilled manual labour involved, sorting of males for commercial scale culture is practised in a number of countries. Growth and production are substantially increased, even though some wild spawning does take place in the ponds. Draining of ponds after harvesting makes it possible to start the next crop with sorted seed stock.

Another approach to the production of mono-sex stock has been by the use of steroid hormones to achieve sex reversal. As mentioned, it has been possible to reverse the sex of genotypic females by the administration of methyltestosterone or ethinyltestosterone in T. mossambica, T. nilotica and T. aurea (Guerrero, 1982). Thedegree of success varied between 90 and 100 per cent. The steroids were incorporated in the feed of fry at rates ranging from 10 to 60mg per kg fish, for durations varying from 18 to 60 days. Feminization of genotypic males was achieved in 90–100 per cent of the males of the above mentioned species, by the administration of oestrogens (ethinyloestradiol, oestrone and diethylstilboestrol). The dose consisted of 50–100mg/kg of ethinyloestradiol (in experiments with T. aurea a 100mg/kg dose of methallubure was included), 200 mg/kg of oestrone and 100mg/kg diethylstilboestrol and the duration of treatment varied between 19 and 56 days. From comparative experiments, Hanson et al. (1983) found that the sex-reversed malepopulations have a higher growth rate than hybrids and females.

Rothbard et al. (1983) have described the procedure adopted in Israel to produce hormonally sex-inverted all-male tilapia. The fry are placed in outdoor concrete circular tanks of 28 m3 capacity (diameter 6 m). Commercial high-protein trout starter feed or eel feed is mixed with the androgen 17 a-ethinyltestos-terone dissolved in 95 per cent ethanol (technical grade) for feeding the fry. The ethanol is evaporated by drying the mixture in the sun for several hours and the fry are fed at the rate of 12 per cent of their body weight per day. The tanks are protected from sunlight and the water temperature maintained between 21 and 22.5°C. The treatment lasts about 28–29 days.

Treatment of hybrids of T. nilotica males and  T. aurea females, F-1 hybrids of T. nilotica and T. aurea, and the red tilapia yield populationscontaining 98–100 per cent males. Studies showed the level of testosterone in the plasma of sex-inverted fish to be only 11.1 ± 4.3 ng/ml, compared to sexually active males of T. nilotica and T. hornorum with 37.8 ± 9.1 ng/ml and 41.7 ± 4.6 ng/ml respectively. From this it is concluded that androgen treatment of fry has no effect on circulating testosterone levels at post-maturation (Rothbard et al., 1982).

Hopes of using inter-specific hybrids as a means of controlling wild spawning were aroused by the production of all-male progeny by crossing T. mossambica females with T. hornorum males by Hickling (1960). Besidesproducing mono-sex male populations, cross-breeding could help in improving catchability, growth rate, temperature tolerance and body coloration. These could greatly enhance the value of tilapia as candidate species for large-scale fish culture. Since then a number of all-male or predominantly male hybrids have been produced:

One hybrid that has received special attention from fish culturists for some time is the so-called red tilapia, the colour of which is a blend of pink, yellow and gold. It is appreciated in the market in preference to the normally silvery grey or black-coloured tilapia. Red tilapia is known to have a faster growth rate and food conversion ratio. It can grow in both fresh- and brackish-water environments. The origin of this hybrid is not yet fully documented. A reddish-orange F-2 progeny with superior qualities was obtained in Taiwan by crossing a mutant reddish-orange female of T. mossambica with a normal-coloured grey male T. nilotica. In the Philippines, a similar reddish-orange or golden progeny was obtained by cross-breeding a female hybrid of T. mossambica x T. hornorum with a strain of T. nilotica. German and Avatlion (1983) found that the red tilapia is intermediate in several characteristics between T. mossambica, T. hornorum, T. nilotica and T. aurea, and speculated that all these species areinvolved in the hybrid.

Lovshin (1982), who has reviewed experience in tilapia hybridization, pointed out that in spite of the knowledge that all-male or pre-dominantly male populations can be produced by hybridization, commercial culture of such hybrids is limited. One reason for this is the difficulty in maintaining pure genetic lines which are necessary to obtain consistent results in hybridization. In commercial production, varying proportions of females occur as a result of contamination of the brood-stock lines. Electrophoretic comparisons of blood proteins and crossing in aquaria of the brood stock until all-male offspring are consistently produced have been suggested as a means of ensuring pure brood stocks. These procedures are feasible in breeding centres, but there are only a few countries where such facilities are available at present for the production and distribution of selected pure lines of aquaculture species. Further investigations by Majumdar and McAndrew (1983) showed that even crosses between pure lines produce varying sex ratios. In 41 trials, only one cross (T. mossambica malesx T. macrochir females gave 100 percent male progeny.

Small aquaria, concrete tanks and plastic pools are generally used for hybrid production. As mentioned earlier, male aggression is a problem in spawning operations in small containers. Cannibalism of fingerlings on newly hatched larvae is an additional problem in aquaria and similar containers. According to Lovshin (1982), some hybrid crosses are difficult to carry out in small confined environments. It has been demonstrated that earthen ponds can be successfully used in cross-breeding of tilapias, following the general procedures for pond spawning.

Lovshin (1982) has described a system developed in Brazil for the production of hybrids of T. hornorum and T. nilotica. Fig. 20.5 illustratesthe steps recommended. Fingerlings of the two species are sexed when they have reached weights of 20–30 g, and the males and females are stocked separately in segregated brood-stock preparation ponds, at the rate of two or three per m2. They are fed at the rate of 5 per cent of their body weight daily, and in two to three months grow to about 60–100 g and become sexually mature. 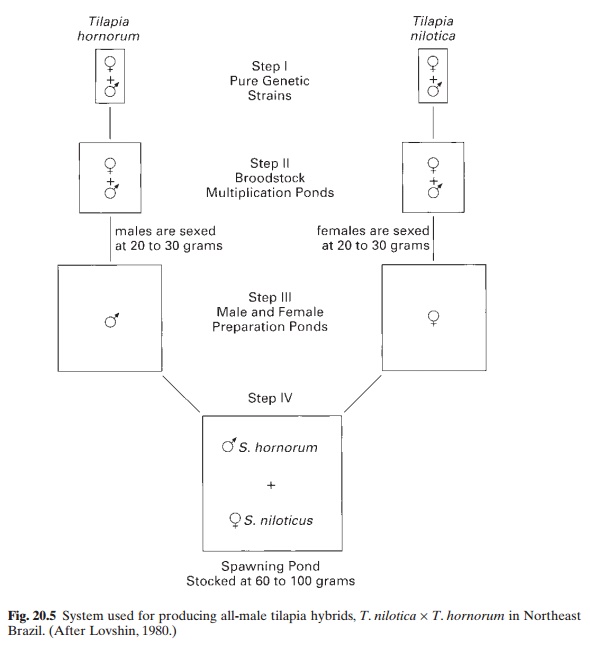 Mature male T. hornorum and female T. nilotica which have swollen genital papillae areintroduced in the spawning pond at a ratio of 1 : 1. The stocking rate is one female to every 7 m2 pond surface. The brood stock are fed with agricultural byproducts at the same rate as for immature fish. After about two and a half months, the spawning ponds are drained and the hybrid fingerlings collected for rearing in nursery ponds. The ponds are dried after drain ing and poisoned to eliminate any small fry that may have been produced by back-crossing between all-male hybrids and female T. nilotica. The process can then be repeated withbrood stock that have produced sufficient numbers of hybrid fingerlings.

According to Hepher and Pruginin (1981), tilapias do not readily hybridize in aquaria and so artificial propagation methods are generally used for hybrid production in Israel. Ripe spawners with swollen papilla and intense pigmentation are selected. The eggs from one of the females of the selected species are stripped into a suitable container and mixed for about two minutes with milt from the male of the other species. About 10 ml saline solution is added and the eggs stirred for a further two minutes. The eggs can then be rinsed and transferred to an incubator for hatching.