Grow out in ponds - Tilapias

Tilapia culture is generally oriented to producing fish of marketable size of at least 200–300 g.

Tilapia culture is generally oriented to producing fish of marketable size of at least 200–300 g. When the grow-out is based on unsorted seed stock, this can be achieved only by low stocking densities and intensive fertilization and feeding, so that the majority of the stock will have reached an acceptable size before they become sexually mature and start breeding. For this purpose, a low stocking density of 3000–5000 per ha is recommended (Hepher and Pruginin, 1981). Two or three crops are raised every year, and after each harvest the ponds are drained completely. The possible use of predators to control fry produced by wild spawning has been referred to earlier but, probably because of insufficient numbers of predator fry, this practice has not yet been widely used.

For successful grow-out it is necessary to stock recently produced fry or fingerlings and not the stunted fingerlings from a previous crop that would breed early and cause overpopulation and stunting of stocks. Commercial culture of tilapia in the Philippines in fresh-water ponds is largely based on T. nilotica. Successful farmers stock about 20 000–30 000 fingerlings per ha. The ponds are fertilized with chicken manure and ammonium phosphate. Supplementary feeding is done with fine rice bran, and some farmers mix it with dried broiler manure. Selective harvesting starts after four months of culture, and complete harvesting is done after five months.The average production is reported to be about 2 tons/ha per crop.

All-male stocks eliminate many of the problems of tilapia culture, in tropical as well as sub-tropical waters. They can be grown to a larger size of 400–600 g weight to suit consumer acceptance. The longer grow-out period is compensated by the higher prices that large tilapia fetch in the market. Stocking densities of hybrid or all-male populations depend on the level of inputs and management. At even low stocking densities of 3000–5000 per ha, with supplementary feeding of protein-rich feeds, individual weight increases of up to 3–5 g per day have been recorded. All-male T. nilotica and all-male hybrids of T. nilotica x T. hornorum of 60–63 g weight, stocked in densities of 10 000/ha and cultured for a six-month period, yielded 2.8 tons/ha of T. nilotica and 3.2 tons/ha of hybrids

In Israel, all-male tilapia (T. nilotica and T. aurea) or hybrid tilapia are commonly culturedin polyculture systems with common carp, mullet and silver carp. Such a combination is believed to contribute to the maximum utilization of feeds and improvement in the chemical regime (dissolved oxygen, ammonia and nitrite levels) in ponds, due to a proper balance of phytoplankton communities and detritus, and also to the better growth rates of some of the species, especially common carp (Sarig, 1983). The proportion of tilapia varies very much between farms, but it is usually higher than mullet and silver carp, and is second only to common carp. Some farms cull a good percentage of carp towards the end of the rearing period and replace them with tilapia. Tilapia then becomes the predominant species. The annual yield in many farms in polyculture can reach 7.5–10.7 tons per year. Tilapia may account for anything between 9 and 53 per cent of the production, the average being around 25 per cent.

Experiments conducted in Brazil have shown that polyculture of tilapia hybrids (T. nilotica x T. hornorum) with tambaqui (Colossoma macropomum) is feasible. Stocked at the rateor 10 000 tambaqui per ha and 3000–5000 tilapia hybrids per ha, and fed with pelleted chicken diet (17 per cent protein) at 3 per cent of the body weight, an average production of 7.5 tons/ha of tambaqui and 2.9 tons/ha of tilapia have been achieved (Lovshin, 1982). In some areas of China, polyculture of T. mossambica and recently also of T.nilotica withChinese carp is practised, but tilapia forms only a subsidiary species. Brood fish and fry are reared indoors in greenhouses at temperatures between 17 and 20°C during winter. In spring they are transferred to well-fertilized outdoor ponds. Yields in four to five months of rearing can reach 1100 kg/ha without supplemental feeding, and 1900 kg/ha with feeding. 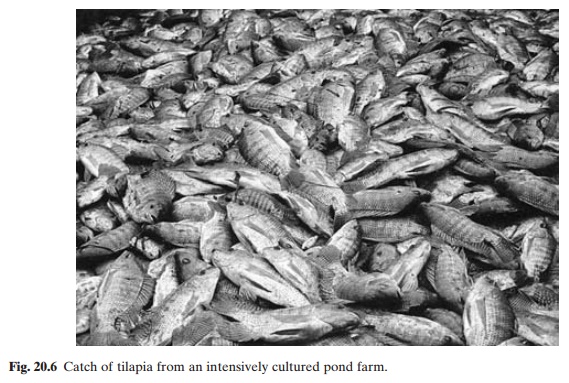 Although tilapia can be divided into macro-phagous and microphagous species, under pond culture conditions they have flexible feeding habits. Detritus forms a good percentage of their food. Fertilization of tilapia ponds is aimed at increasing overall food production in ponds. Experience so far seems to indicate greater efficiency of organic manuring in comparison with inorganic fertilizers. Organic manures increase detritus in ponds, which stimulates growth of bacteria and zooplankton. In manured ponds, high yields of tilapia have been obtained even with high densities and without supplementary feeding. Ponds in Brazil, stocked with all-male hybrid tilapia at a density of 8000/ha (25 g average weight) and fertilized with 500 kg/ha of chicken manure per week, gave an average yield of 1.35 tons/ha after 189-day culture. The average size at harvest was 186 g (Lovshin and Da Silva, 1975). The high performance of tilapia in integrated farming with pig and duck rearing reflects the advantages of organic manuring in tilapia ponds.